Strange Troops of the Monster Empire 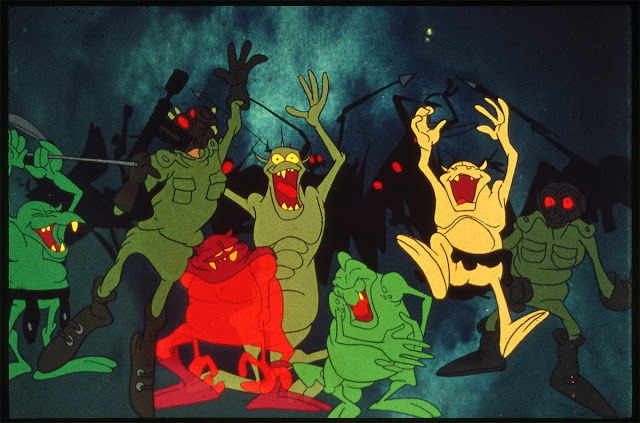 Unlike most of my tables this one gets more mundane...
These troop types were around in the monster age and still around by the age of Exilon in outposts and ruins of old. By the time of Shadelport only the deepest dungeons can they be found.

Afterthought
In the time of Exilon new beastmen, orc and human tribes are becoming dominant over the old. The rebel races helped bring about the end of the great age of darkness and the monster empire.

The Seven Rebel Races
Humans
- barbarian tribes destroyed monster kings cities and temples
- amazons were one of the great tribes
Elves
- dark elves betrayed the monster kings and gave their secrets to humans
- threw up great woodlands to disrupt the monster empire trade and commerce
Dwarves
- gave humans on loan the secret of iron but humans have not given it back yet
- helped with many gifts like metal work, armour, domestication, saws, ploughs
Gnomes
- underrated magically, willing to do new things
Halflings
- plucky, lucky and sneaky these guys moved contraband and messages between the rebel races
Orcs
- turned on their masters and were now able to reproduce on their own without magic
Abhumans
- new breeds of beastmen such as dog, goat, bear, rat, lion, stag men became greater
- birdmen and new sea races became ascendant
- elemental abhumans became tribes of barbarians mostly forsaking civilisation
Tako
-octopus faeries from the sea come to the surface helped land and sea peoples unite

Rat Men Clans
Black the plague carrier clan worship demons and gods of darkness death and pestilence
Grey are town rats who live in the cities of men and have built their own in the past or as slaves of the monster kings
Brown live in woods and wetlands and rivers, simpler tech and more savage tribals
White clan live in the underland mostly scavengers and bandits but willing to use black magic
Naked clan are hairless and often tattooed and pierced living in ultra dense colonies feeding off tubers and serving a queen, often act as tunnel fighters, sappers and builders
Posted by Konsumterra at Wednesday, December 19, 2018