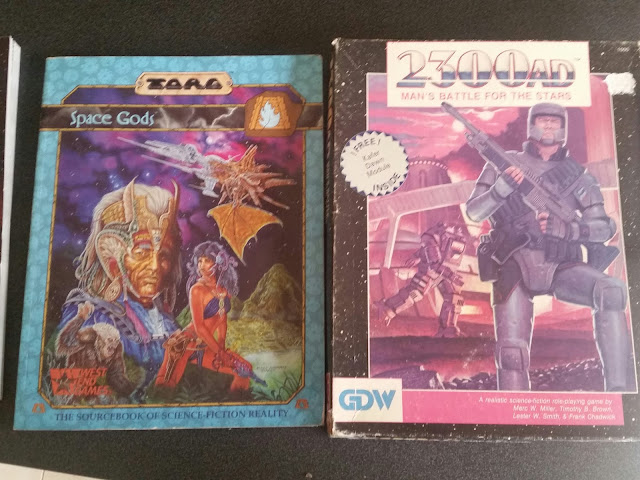 Torg Tharkoldu book influenced my portrayal of tech in all rpg games since
cyberpapacy would be great for any time travel game - i used it for a planet in my sf universe
i had no interest in torg as is i used it as a module for marvel for a year
if you wanna run Cthulhu in space
2nd ed 2300 AD man's battle for the stars plus the vehicle and equipment guides and even the kafer sourcebook for a alien race would be a fantastic consistent ALIENS type universe of future colonialism meeting aliens on the frontier and having a war with the kafer (cockroachmen who get smarter the more they fight and assume always smart humans are dangerous barbarian psychopaths).

the cybertech/earth/beanstalk book is pretty good too

Thats what i use as my main inspiration
|
plus the also cheap and I recommend:
High Colonies book. which has a similar tech and feel but i use as sourcebook for the earth solar system.Ignore mediocre reviews. One of better solar system campaigns ever. It assumes earth was destroyed in war but really aliens bastards did it and now they hide in the ruins. Ignore reviews of this it has lots of good stuff like rolling up orbitals and habs and asteroids and moons.

2300 and High Colonies have a dry militaristic detailed universe to have militaristic adventure in. So it has lots of detail about politics, economics, technology, factions, organisations. Its a good blank slate to ad other tech, supernature, new aliens, cyberpunk, androids whatever. As they are they can be dry and er militaristic. Has some good exploration and military adventures to be fair. 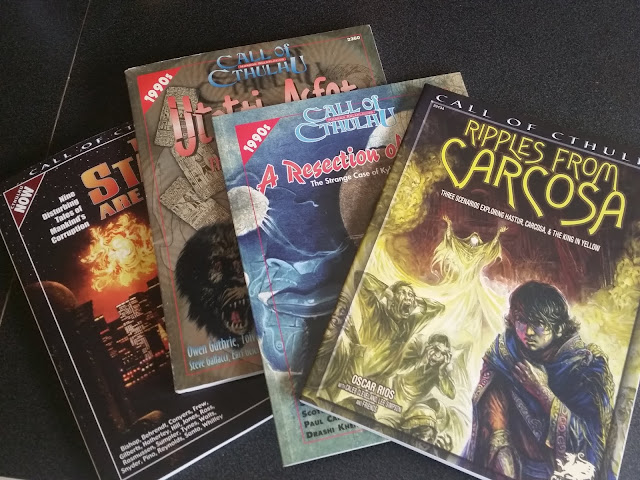 Cthulhu now stuff from 91 onwards.plus ripples from carcosa with a roman, dark ages and a sf adventure. A reincarnation nephalim cthulhu type mash up game might let me use this and strange aeons books. Anyway  there are a few cthulhu now books i had missed and many are still available. I think If I ran Modern cthulhu I would mix laundry with superworld and a bit of zenith. Anyway as ive been playing cthulhu mostly of late ive been scoring cthulhu stuff from that era my city had none in the shops. Sydney had and still does have some old stock and so does perth. Local post has been kood and noble knight do good bulk purchase freight which is great. I usually buy from UK Germany Korea Hong Kong France Italy Spain with USA being prohibitive cost One book i want from USA is $130 Australian for a $50 US book by post so I will have to wait tor a while till it comes to australia or i can get a good frieght deal from another store as bulk from USA is better if i have to do it

Anyway enjoying reading of late. Fighting fantasy book killed me in 15 minutes.Have about two-three tables to finish then onto next book layout. I might have too draw too.
Posted by Konsumterra at Thursday, May 17, 2018