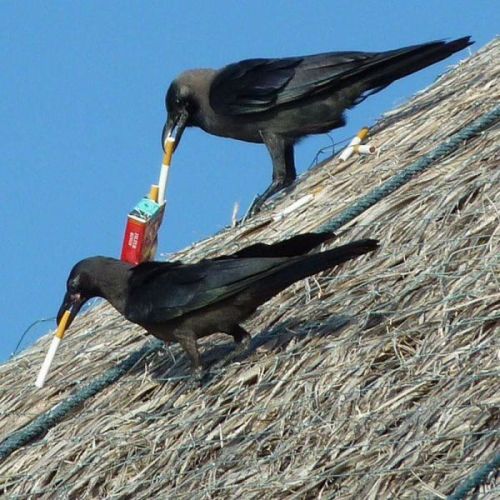 Birds are worth mentioning in my dnd game

I will do a doc of my game birds spec up in my format soon up here but this is sketch of birds ive been staling on. Obviously my definition of bird is a bit different. I thought i had worked on stats for moa, ostriches,emus, cassawarriorers and other giant flightless birds

Chaos Bird House Tree
HD x5 of breed AC of  breed Att 1 spawn bird Move 0
Based on breed of normal bird and acts as home to 2d6 birds. If threatened or birds chirp angrily will produce one extra bird per round. A living pulsing dripping chaos tree with organic structures and orifices that house and spawn monster chaos birds. If bird population reaches more than 12 without a fight the flock split and half travel away to plant a seed for new colony. Mostly with smaller breeds like stirges or humming birds.

Chaos Humming BirdsTiny jeweled humming birds that burrow into your flesh but only 7 at a time will burrow into human (more in a bigger creature). To kill inside a host you must strike the host to hurt the bird. This does half damage to bird and the other half to the host

Stirge Bird
Horrible featherless owl like bird with no feathers, hideous wing membranes and long thin piercing beak that impales victims. Once they hit they suck blood till they or prey die or till they drink 12 Hp and are swollen with blood

Chaos Parrot
These colourful evil parrots travel often in groups. Each parrot knows a 1st level spell. The parrots are cruel and evil, enjoy taunting and teasing but they also can copy wizard spells cast in their presence. If wizard spells used in presence each parrot can copy one level of spell. If spell is higher level the parrots work together each parrot providing a power level. So three parrots could together copy a third level spell like a fireball. Spells mimicked are forgotten 24 hours later

Spit Bird
Hideous featherless birds with bat like wing membranes making hacking coughs to spit offensive secretions at enemies. There are many varieties that spit different substances. Some spit webbing requiring a save every to minutes or fire to escape. Acid inflicts 2d4 damage and burns for 2d4 more rounds at one point per round (save for half). There are fire, disease and poison spitting ones but they are more rare.

Crimson Ibis
Sticks beak in body often through digestive tract and sucks innards for a d4 damage per round. They attack only while on the ground and give off a horrible honking sound

Chaos Kea
Huge jolly bloodthirsty parrots that hop about mirthfully shredding flesh and tearing apart buildings and waggons. Can on a natural hit roll pf 20 tear off a fragment of armour reducing AC by one point. Very inteligent and social, capable of ambushes and communicating with own kind

Chaos Owl
Night predator owls that adopt human form or in between forms who murder people by night. Can cast priest spells as a 4th level evil priest. Often lairs in a haunted place and may have evil followers. Some like to seduce then eat men. Sometimes they might increasingly start turning into a owl monster while lovemaking starting with the feet. Many mistake them for witches

Harpies
Disgusting hideous crone women birds from waist down with wings. Their touch is diseased and they often fling diseased excrement from above on targets from 6" up. Will use weapons like a club or discarded human weapon or javelin or sling or rock instead or bite or for a missile weapon. They spoil anything edible shitting on fruit trees, hung meat or corpses. The diseases are horrible supernatural ones. Often a double HD one will act as a queen and able to cat spells as a 5th level spell caster of some type

Siren
Attractive women, birds from waist down with wings. They have a attractive song that lures in prey including animals or humans. They can charm by touch often using a kiss. Slaves are often eaten or used as guards or tormented for fun. Many wear jewelery. Often a double HD one will act as a queen and able to cat spells as a 5th level spell caster of some type

Cockatrice
Horrible chaos roosters that turn prey into stone. They tend to degrade and poison areas they live in killing plants and poisoning streams. They have tiny gold crowns gifted to them by demons worth a 1000gp

Bat
Small screeching devil faced cave horrors with wing membranes instead of feathers. Bats use echolocation and are not effected by blindness, bright lights or attacks on eyes but silence spells will blind them and area of effect of silence spells appear as solid objects

Giant Bat
Huge bats that are often used as mounts by goblins. All within 6" must make a save vs horrible screeching or will cover ears and try to escape, only one such save is needed per encounter

Doombat
Giant bat with a flailing 12 foot long spiked tail also usable as mount by chaos warriors and man sized creatures. They dislike magical light. Their screech lasts d4+1 rounds per encounter and all within 10" cannot cast spells and have a -1 on all dice rolls with no saving throw

Flame Hawk
A burning hawk from the plane of fire. They will start forest fires if loose in the mundane world with their flaming bodies. Their touch counts as magical spell fire nor natural fire

FlamingoExotic sunset coloured birds like to wallow in swamps. They are quite intelligent and each one knows a first level spell, preferring fire spells. Wizards might catch them to obtain their secrets but the birds most of the time die from melancholia if alone before revealing any secrets. They mostly defend themselves preferring to flee or guard temple fountains

Stymphalian Birds (Iron Bird)
Iron feathered bird that can use it's iron claws or beak or it's feathers. They are sent to guard locations sacred to the gods and are very lawful. They are intelligent enough to understand human speech but quite inflexible in their duties. Prefer to swarm around targets in the air and shoot them with iron feathers than get close

Blood Hawk
Savage bloodthirsty birds who like human flesh. Tend to live in out the way places or guarding something for the gods. They can be trained and stand a yard tall. Nonhumans might use them. There are 4HD giant ones that can be ridden but they eat a HD a day of meat

Sacred Ibis
These holy birds are highly literate and can write with their beaks. They can take dictation and copy books and letters. Each one knows a first level cleric spell and they can read magic scrolls. They often live in temples and most frown on harming them. they do like eating garbage if not near wetlands and might graze a fe hours a day in a midden heap and like human food. They like to nest in palm trees and their mere presence keeps away flying bat winged snakes who dread them

Golden Pheasant
Is king of the meadows and grasslands and is protected by law allowing only kings to hunt them. Their flesh heals a d6 damage to up to four eaters and their gold feathered skin is worth 30gp. The females are duller and mostly avoid humans and hve HD2 and only a d6 peck. They will protect natural animals and their mates from evil.

Golden Goose
These divine geese lay a d6x10gp gold shelled egg once a month making them desirable for evil beings to kidnap. Unfortunately they might stop laying if unhappy. If captor lets eggs hatch and keeps the shells (only 10% value) the goose will tolerate captivity more.  The geese are geniuses and know many tales of ancient lore to entertain and inform. They will care for children and baby animals as if were there own. Each can cast spells as a 4th level cleric. It is more effective to protect their nests, feed them and heed their advice than to torment them

Great Eagle
This ancient race have aided the good since the dawn age and often cooperate with elves against evil humanoids. They will eat orcs and goblins in favour of more natural prey. Some elder ones have druidic spells

Roc
Are gargantuan eagles which eat elephants, sea serpents and smaller dragons. Some will menace shipping and snatch crew for snacks or carry them to their nests on mountain tops or islands in far away lands

Pheonix
These divine birds are said to be the ancestors of all birds born from the gods and primal elements. They are genious and immortal and can plane shift. If killed they are reborn and may seek to avenge their deaths when grown to suitable size. The lesser phoenix can cast spells as a 6th level wizard, causes 2d6 heat damage per round within 2" and explodes as a 6d6 fireball. The Greater Phoenix casts as a 18th wizard, causes 4d6 fire damage within 3" per round and explodes as a 12d6 fireball on death. All the magical fire and heat damage can be halved with a saving throw. They make nests of gold, jewels and valuable spices like cinnamon. Sometimes they guard temples and relics for the gods.
Posted by Konsumterra at Wednesday, August 09, 2017