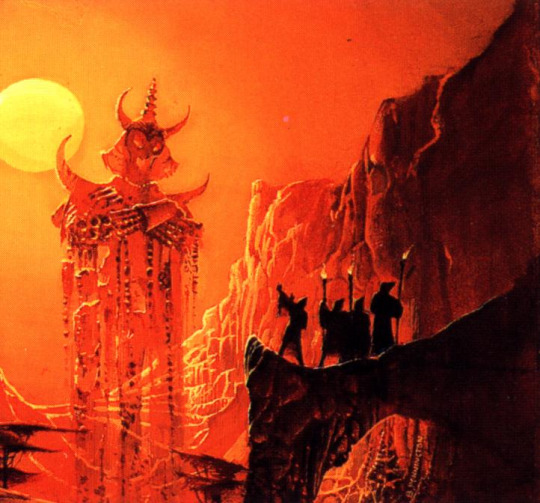 I have been playing BX red box dnd on fridays and had a go at playing RQ2.

DnD has been fun and interesting how wrong our memories are. Like many the companion set came too late and we got into Adnd and like many played a hybrid for some time. So most guys my age our re discovery has been interesting. A few difference in spells, monsters, combat order, movement stump us a bit.

Ive been playing chaotic bastards. So It is very handy I can talk to lots of monsters and when they surrender I offer them jobs (copper pieces and chance to be in a pecking order). I keep convincing less bright lawful adventurers to perform awful deeds in the name of goodness. Like enslaving monsters to make them repay their crimes in name of goodness. Robbing monsters and dispensing justice is totally ok. Charming guys in prison then getting them temporarily released into party care so they can help repay their debt to society (as meatsheilds). Even got a town dwarf drunk charmed and reformed him as a pole boy. They go back to prison in between adventures and the sheriff is very pleased as he gets days off.

When I put flayed goblin faces on my chest plate it was because chaos monsters only respect strength and horror so looking like a bad arsed monster killer helps us overcome evil. When I freed prisoners from the boss monster i assured them he would no longer be molesting them now they were in my care.

It has been almost as fun as when I played a nuetral fanatic and did everything in the name of nuetrality. Or when i got party to move in dungeon and live with monsters and renamed my character Sargon the Sodomancer and had local dwarves issue a huge bounty for me for the crimes I claimed to have commited. Yea im kinda horrible as a player.

Ive been running RQ2 a bit. Has been fun but the order of stuff in book and character sheet is a bit off. Cannot find coin conversions in the new book. I was shocked when characters start with no skills outside bonus and need to work as apprentices for several years to be good enough for a fight. When we played RQ2 it was heavily modified and all but one GM did not use Glorantha because they thought it was silly (ducks!). I played RQ3 and stormbringer and never realized how much GMs tampered with the game as they used stacks of notes and fragments of disintegrated books. I had the RQ2 table book as it had stuff like alchemy. I have most of the 2nd and 3rd ed box sets.

What I have learned from this gaming is how disorganized these older books were. RQ3 and Cthulhu by contrast were well organised and flexible. RQ3 Was one of the best layed out games. This format has been kept in some of the newer products and I hope is in RQ Next.  Interestingly gaming from 77-84 was much less concerned with using unmodified rules than people are today. Many house rules and mods were accepted as normal. So replaying these games makes for colourful surprises. Many RQ2 gamers took bits of RQ3 and we all got a bit confused by which was which. Basic DnD added bits of Adnd as manuals came out and our memories of which was which got a bit jumbled. To me this is how games should be. Emphasis on one true now system is a modern invention and more about marketing and "living" campaigns than having fun. Interesting home brew settings and rules are harder to get interest from newer players in clubs and cons.

About 4 or 5 years ago I started playing gamma world again then I got asked to run DnD. I re wrote it from memory and this became my core EMO elfmaids and octopi dnd system. I remembered it all pretty well. I adopted a few things from castles and crusades and other versions to simplify the game more. I also was influenced by Temple of Elemental Evil pc game from Atari. Then I tacked on my hideously complex but fun skill system based on OA and Survival guides.

My next version will be simpler again I hope with quick build kits to let new players join in faster at mid to higher levels till they get the system. I still find high level dnd gets more maths, more dice and more time spent just counting loot which i find tedious. But my poor players get wary at higher levels and want to go on a bit higher which is which I have developed more high level stuff like Xor and Hell.

LTFP is pretty enjoyable, well organised and streamlined but those spell changes are very world breaking.

I have been offered more work in Sydney and will be asked to apply for a permanent job I know others refuse to do but I don't mind so this could be better than the three applications I made last year. Anyway getting a permanent position worth relocating back to Sydney. Will see what happens.
Posted by Konsumterra at Friday, August 12, 2016