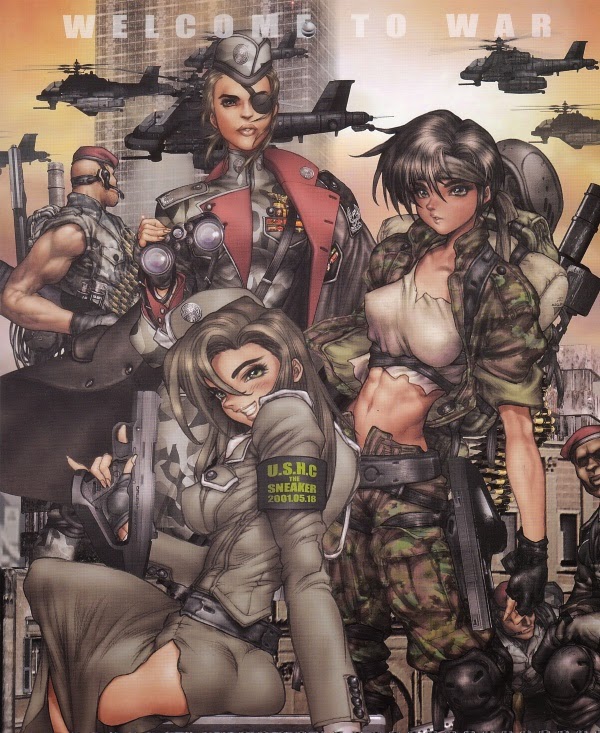 So ran a session with a player from earlier group with several newbs. The vet I made a corporal and 1st lv wizard (secret) and rest had 4 zero level soldiers and civilian experts recruited to explore the dungeon dimension as part of operation Alice and the experimental operations group.

The recruits were taken to the surface base in Emu Flats for training. The corporal had lost his whole squad and returned tainted by magical texts and was now a apprentice wizard with training to hide his magical effects. His squad had no idea.

After basic training they went through the nuclear blast doors and the apature into the dimension to the forward base. Of course vets ignored them as most would probably die. After settling in a few saw signs of the base mission. Medics saw some wounds in hospital they couldn't comprehend. Others got to clean monster cages and dissect some dead orcs. A few saw documents seized from the alien species including elves, dwarves and goblins.

As one player had done basic scenarios and I knew another was coming late, the squad was to look up a old abandoned forward camp. Went with a sarge to the distant deep cavern. On way found a unmapped small cramped tunnel. Sent in a green recruit who crawled with a pistol and a torch into a chamber with a huge chest with four locks. Seemed it couldn't fit through only exit. Kid tapped chest and lost radio contact.

Squad ordered to turn backs while magician corporal summoned three halflings to explore the hole. One returned complaining of gas before he vanished back to where summoned beings come from. A trooper climbed in with two gasmasks, found unconscious kid and dragged him out with a mask. He recovered promptly. Sarge marked on tablet map and got squad moving.

Found huge cave with a crumbled structure of stone on rock outcrop connected to entrance with a raised path. Most of floor level 20 feet lower. Was a lake and three other passage ways. One passage was up high on a cliff overlooking cave. As approached the ruin saw Australian army rubbish dated from 60s and evidence others had camped here more recently. Found a toilet pit buried of something not human. Some fish and elf bones chewed near fire place.

Set up camp and sarge got six squaddies and corporal to check out perimeter. On way hears voices no like any recording they had heard. So sneakiest men went ahead to get better angle to see in cave saw 5 short white haired bearded humanoids with white eyes. Two had hooked glaives, two including boss had hammers and one with a crossbow. They seemed aware someone else in cavern. Two crept out and rest of squad saw secondary boss with hammer sneak out but not  crossbow user.

Squad opened fire obliterating visible hammer man. Snipers shot leader and surprised leader took so many bullets and still standing. One foolish squaddie charged with a bayonet into cave and stabbed a creature but crosbowman shot him down. Rest of squad moved up and blasted rest till all down but one with glaive who reached snipers. Two men pulled back the over zealous kid and stabilized wound but he was also poisoned by crossbow. The radioed sarge and requested doc move in. The glaive man took out two troopers before one sniper grappled him allowing three other men to bayonet him. Guy went down dropping glaive but broke free before a hail of boot brought him down.

Poisoned man was kept alive with constant cpr and adrenaline shots before doc managed to find antidote on a creature and risked it. Other men regained consciousness and four of five creatures stripped and cable tied. One squad member badly hurt unconscious still and poisoned guy was saved. Sarge ordered cave quickly scouted then all returned.

Back to base where two in hospital and other participated in base life. Playing volleyball, brawling in bar, spending time in brig, studying monster tech and getting familiar with base tech. Heard of doppelgangers and mimics in base. Also how sterilised dogs had become fertile and were impregnated by blink dogs.

In hospital late one night a man awoke to find a ghoul infantryman sucking on his bandages. He screamed and flailed and got a claw but awoke another wounded man who called out and punched ghoul. When ghoul turned on him, the first trooper ran for guards who came and killed creature. Doc came to see fuss and treated mens scratches.

"Lucky only a proto ghoul" he remarked.
Then noted on medical records men might be susceptible to ghoulism on death.

Creatures captured identified as Derro. In cells they lied and threatened and tried to turn interogators on each other. Strange mentality and brain structures intrigued base scientists.

Next did a quick return to the cave. With some new team members including a drone operator. In the cave the Derro were guarding before they went till they found a mini keep gate house with portcullis operated by derro. A side passagehad a well with bald grey skinned gnome fishing. Best sneakers tried to grab him and gnome got to slap one in face with rod before being pu in a sack and carried back to camp. Turned out corporal knew elvish and gnome knew a dialect so communications were established. Creature was friendly and offered to establish trade if humans were here to kill derro. Gnome was keen to get help but sarge said we can take this gate now.

Stealthiest in dungeon cam gillies suits got close with demolitions troops and pulled back. As guards spotted them the demo crew pulled back under cover from kill drone and rest of squad. Corporal summoned several dwarves inside gates causing derro to swarm around gates to get them when demo charges set off. Destroyed walls and injured most of the derro. Squadies threw 3 grenades which finished them off. Looted some silver and more poison antidote and said fare well to gnome. Set some booby traps on derro base remains and went back to base.

All went well and several new players keen to do again. No regular time proposed yet but will run if i can get at least 3 more players.
Posted by Konsumterra at Sunday, January 25, 2015