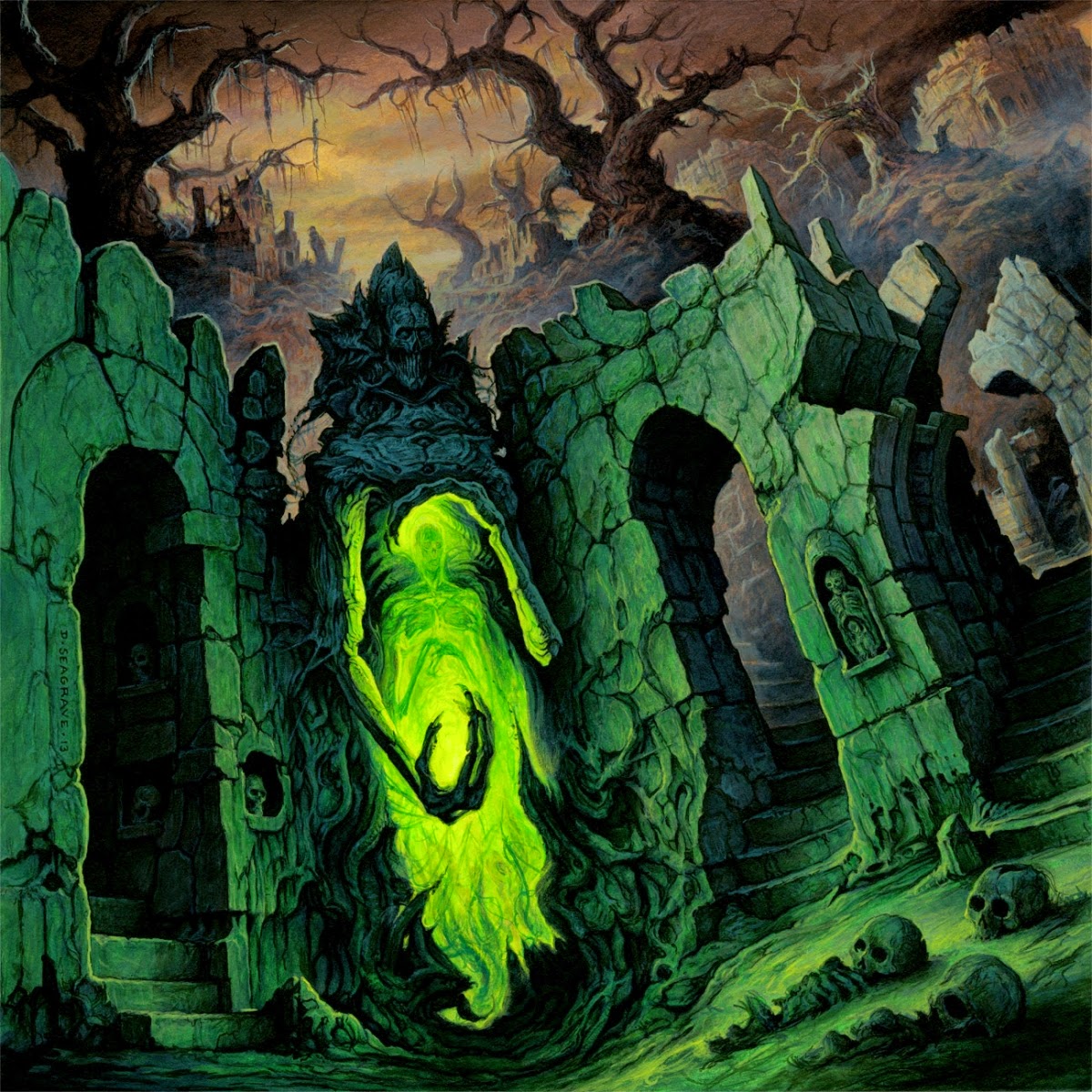 So the party of Acula the now LE Orc Archer, Nahme the Angel and The Tako kid have finally escaped the underland after several months. Acula had divinations from orc Shamen warning there was trouble with his wives and the evil sorcerer Chondaru. The party have about 19 flunkies now, plus three riding beetles and a pack lizard.

So they had got out of the pit and viited the Black orc king's court then departed for home. The mountains were slow and dangerous travel but two of the orcs were expert scouts who could move faster. Floods had wiped out way party came.

Saw a kobold ambush on cliff above road but Nahme flew overhead and scared them away. She no longer bothers to hide her wings (now 7th level). Found a crumbling fortified bridge where two bandit gangs were discussing turf (about 40 men in all). One savage cannibals in turbans, the other mountain brigands. Nahme carried the Tako over head and he lobbed a fire ball inside vapourising most of them Leaders managed to flee, Two cannibals and a brigand luteneant dragging charred leader. Accula killed the bosses with arrows. Surviving bandit jumped over the bridge into rapids and Nahme tried to grab him but he was dashed against rocks and his innards drifted down the river and became entangled in rocks. Other party flunkies shot the last cannibal.

At night some kobolds were scuttling around the camp but Acula heard them and snatched two. The rest fled and managed to convince kobolds to come to party dungeon to join kobold tribe there. Olga the orc told them it was a kobold paradise with food and pay and retirement benefits.

Found a flimsy rope and board bridge over chasm and 5 hermits, cast out from civilization and cooking rats in a birch bark pot. Gave them some money and invited to join party. Thy were too lame so they wee given rides on beetles. Found a small tribe of rare Indigo orcs creating new warriors from mud pit. Acula watched the enchanted moment then recruited 4 to join him promising to help Indigo orc population (they had no females and dont breed true without magic).

Found a crumbling stone elevator that once carried travellers to lower road but party climbed and flew down easily. Found great river fork and a crossing where giant turtles swam surrounded by crocodiles. Party unconvinced was safe so Nahme scouted by air and saw a giant tree crossing canyon about six miles back. So got to tree and Nahme and her young brother flew over. Acula began to cross and a demon appeared from sulpher cloud to block him demanding souls of who crossed. Acula sprung to attack and Angels flew at him and demon fled unused to opposition. Met some druids who were friendly and pointed way to Highland kingdom where they could travel faster. Advised to meet border guards and ask permission to pass.

Arrived at borderlands and Nahme being the nicest part member went ahead to speak to border watch. They thought party of orcs, crab men, eel men, octopi and bugbears were a formarian plot so fetched chief. He demanded 200gp to enter kingdom and escort "for protection". Even though the three heroes had 20 000gp each they all complained. Acula was outraged about being ripped off and insulted their king. The beserkers began chewing their shields a nd howling but Nahme calmed them. She made a deal for some of her aphrodisiac drugs and some cash which the chief enthusiastically accepted when hid bard recognised the drugs. So in a single day they traveled by highland road further than the last few days and by night were at the great road overlooking the horror swamp. Saw distant black dragon, one of lands two most famous.

Morning they came down road and saw the Bloodsand whaling town which like the last three yeasr of adventurers avoided. Nahme knew  town of degenerates 99% male and feared for her chastity. By lunch came to Marshtown and had lunch at druid school. Didn't see Linden the bard who owned it as he was abroad. Acula uncharacteristically bought everyone a beer in the pub.

Avoided Grogtown and met traveling priests who praised Nahme and told her how the good churches had had a religious reformation since a hierophant from the Empire came with new scriptures. Apparently her sun god was now a celestial emperor. Some were refusing to modernise.

So party tired but forced marched to the renamed Silverthorn village where most of party based. It was basicly a pub and a mansion with a underground dungeon (stolen from Chondaru) full of kobolds and reformed beggers from city working a clothing and brick factory population 120 humans and 300 kobolds.

Tako with his aquatic beast men (including a marine iguana beast woman from Marshtown) jumped into his well and showed them his grotto.

Nahme found the lady he left in charge (rescued from powdered form from a necromancers loot) was sleepin in her bed and acting like she owned the completed mansion. She had been flirting with Nahme's merchant husband. Nahme was furious and called Thomas the priest to cast detect lie. Thomas still had hots for Nahme and blushed and all were awkward for a moment. Having cleared her husband of blame and the girl grovelled for forgiveness, Nahme demanded she and Thomas got married. Worked out ok. She had done a good job of running estate but wasn't allowed to live in manour house any more. Thomas had been running shrine in manour and the dungeon well so Nahme commissioned a 6000gp temple to be built next to manour. Thomas set off to recruit acolytes and ordained his new bride.

Acula had lots of wives to check on. Spent night with his Kobold brides. Had four human/kobold hybrid babies thanks to druid magic. His two kobold brides didn't mind him a orc at all. He felt bad for the idiot one and considered if he could get her "healed". Morning he rushed of to his hidden forest tower (taken from assassin cult and now full of orc budies). His most attractive bride was horrified and demanded a divorce and a house. Acula now lawful evil agreed to divorce her and give her 700gp if she gave him their daughter and one last shag. She grumblingly agreed if lights were out. Orc buddies and the new orcs from travels all mingled: black, green and indigo. His Devil worshiping priest built a shrine in the basement. The eveil shrine under tower was consecrated to good by Nahme and the evil powers rejected it.

Next morning party went to city to check up on properties. Nahme had her poor house and ladies boarding house and shopped for a warehouse to build a bigger sweatshop to convert poor to lawful good. Accula asked her to speak to his city wife.

Tako came along for a laugh with Nahme. Servants let them in and gave condolences for Acula's death and explained kindly friend Chondaru had looked after everything. Wife (a hideous unpleasant hag now a well to do city woman) explained how kindly Chondaru took her to soothsayer and asked "how fares the man Acula" but the soothsayer said there was no such man. Acula arrived a bit angry and she was surprised to see him a living orc. They had second marriage annulled by deed and Acula tried to convince her to become a orc. Nahme said his children must wait till of age and choose to be turned into orcs and Acula agreed. Acula was surely vexed and wanted t kill Chondaru (who had fled that morning) and wanted to kill Chondaru's family. Nahme said he could not harm innocents and his wife said she had become good friends with Chodaru's mother (party had met her claiming to be his friends earlier). Acula muttered he should marry or at least have sex with her. Apparently Chondaru had got a PHD and had fled back to the Hobgoblin halls to serve the hobgoblin king.

Tako went and bought a large prison hulk in the harbour and had repaired. Got his own wharf to save on moorage fees and started making zombie crew men.

Party all keen to get Chondaru once and for all. Acula was inlaw with kobold king and the party kobold tribe and hobgoblin hall tribe had some communication which party used to establish spies in enemy dungeon.  Acula had his tower torture dungeon cleaned up and had burt the Bugbear offer to help make ready for Chodaru. Secret police amended Acula's citizenship papers race section and he was promoted to lieutenant. Hinted they might offer him some wetwork. Helped him swap the magic long bow for a composite bow. Having got his dream bow at last he now wanted life extending abilities. Olga finally convinced Acula's city wife to become a orc. Better a typical orc than a hideous human.
Posted by Konsumterra at Tuesday, January 20, 2015