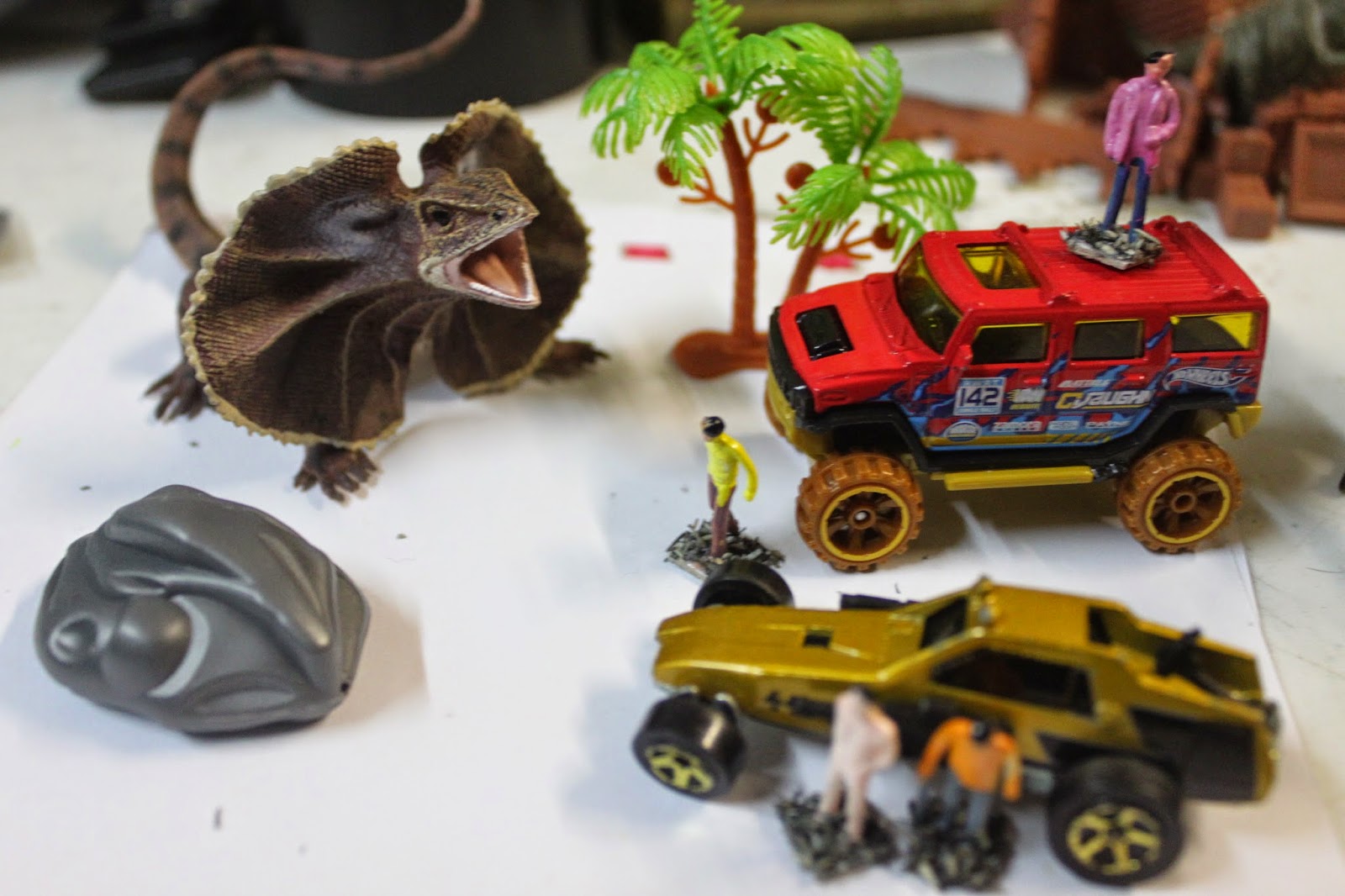 So my 1/72(ish) scale collection coming along nicely. This scale loosens up by necessity and budget and genre.

Mostly started with toy cars matchbox and hotwheels. For some reason i tolerate scale aberrations in marvel superheroes where i use hero clicks for heroes and other scales for cars, civilians and dinosaurs. My BRP im more of a scale snob. When i get a 1920s cthulhu set of stuff going will have to change vehicle scale as slightly bigger scale has more 1920s stuff. There is a model of armoured car used in chaosiums Fearful Passages. Cool but too much moola.

Hotwheels are cool. Some strange and sexy others unfathomable. Weird hotrods of the gods suitable for death racers.

Matchbox is techy nerdery and adventure. They have lots of offroad and rescue vehicles and riot trucks. Also have some tanks, copters, predator drones, some fighters that looked like 80s concept jets (one seems to be like firefox). A half track monster with a panther in a cage in the back. A airport fire truck. A huge mobile armoured police command bus with a ram, huge hook and fold out armour screens for crew cover (easily fit a dozen to twenty inside).

Got some train HO motorbikes we cant find where we got them from and get more. Id get 30-40 more happily. Mix of police and others too. was under $20 for 16. More police might be handy. Got some cheap HO civilians which running down with tiny cars I enjoy possibly too much.

About 130 toy cars later i split set (possibly not very objectively) between myself and the club. Had lots of donations from club and building up a collection of old stuff suited for customizing. Other gamers use for shadow run and cyberpunk.

Got a shonky scale bag of 100 zombies which i will paint as i cant really go to wrong. Will eventually paint but want to get collection up first and practice. Handy for zombie highway games.

I have found a few toys and put bases on them. A restaurant 2 Inch Thor toy I cut clip off and made a base with flocking now i enjoy how he menaces my 1/72nd sheriff of noting ham posse all too often.

Toy bugs, dinosaurs, other critters have been fun and im happy to abuse scale. A tylosaur for a boat war scenario im writing will be a cool addition. Bugs I also use for for Mars attacks instead of bug token. This game has more expansions I will get this year and i realized army men + club dnd minis good for long stairs dnd games.

My ancient set has been booming too with a few divergences. Found a few hours concentrating and fiddling with prepping them good for my insomnia. Ive been getting a few things i wanted and nabbing anything cheap. Adeaide went to my old store and found a few things at very old prices a dream come true. Newer stuff comparable with net prices. Seeing cars scale in real life convinced e to nab 1920s cars and planes some time. My current era of gaming is pre horse.

So I have built mostly Ceaser and Hat mini collection of:

Assyrian "sampler box" with a sprue of Hat chariot, cavalry, infantry and auxilery cavalry & infantry. Its a good beginer set some recomend etting three of. Got extra three chariots and recently got auxiliary army infantry box set. Auxileries a bit more poorly equipped but i use as Babylonians. As the Hat set had no swordsmen I got a caeser set of Assyrians to diversify poses. This will make two armies eventually. Can get Assyrian siege set too and a diferent brand of chariots i could use as Babylonians.

I had a set of Airfix Romans who were lonely so got two sets of ancient germaniacs many fighting nude, one of each brand.

Just got Airfix Sherrif of Nottingham set and will later get robin hood set - has a monk, staff fighters and a woman.

Also a ebay buy of a chariot and infantry Hittite sets. Will get Mittani and Egyptian ones later. Got a sale indian chariot which has a time scale off (4thC BC) but a indian models with elephant too exiting too miss.

Will get some 1920s cops and gangsters (with armed civilians). Some modern special forces and terrorists possible to for modern and my roadwar game. There are several fantasy lines too with orcs, zombie pirates (including a squid face), elves, dwarves, skeletons and wargs you could  use for LOTR or warhammer or warcraft stuff.

Mars Attcks has wrong scale minis but broken wall sections are genius so I got extra one for super heroes and post apoc games. Mantic promise an undamaged kit and make some sf scenery I might try. 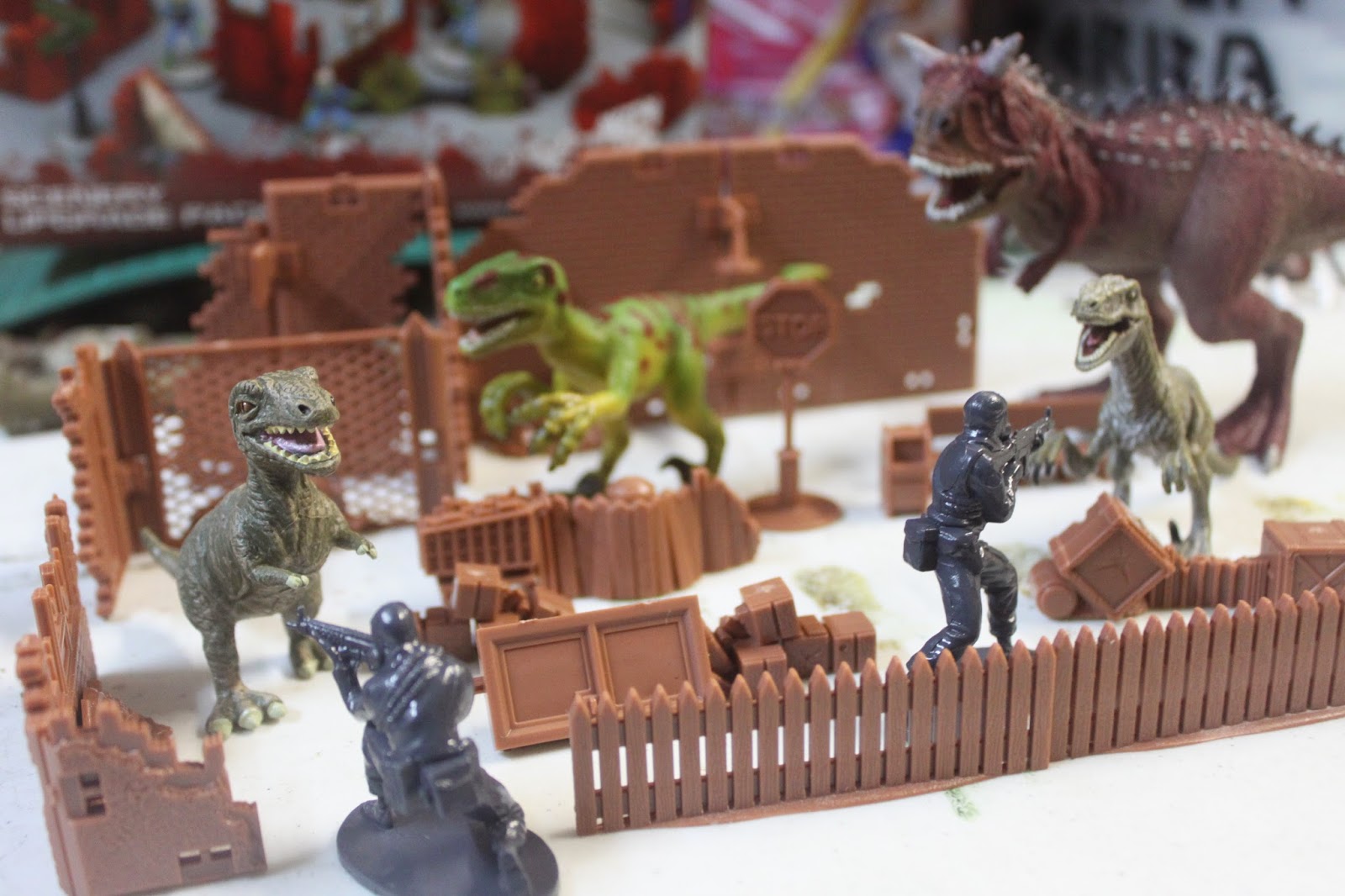 Sadly i had been into this scale since 5 and i gave away my lifetime collection of ww2 1/72 men including 400 8th army and same amount of africa corp. Ive hear guys say they gamed wiith them which was nice as I had mostly hoarded them and ever got used in gaming properly.

As my collection grows I occasionally find ones to suit characters in my RPG which is handy. Will get some dark age vikings and anglo saxons, some more romans and enemies and some more medieval armies like templars. I guess cheap bargains will pop up too.

Pleistocene mammals and terror birds are possibilities too.

I have considered running a whole time travel campaign based partly on the Dr Who story from the 60s The War Games (where dr2 morphs into dr3). Rituals of infinity by Moorcock handy source too im sure influenced the Luther Arkright comic and game (rpg coming too to BRP/RQ) that i could do any psuedo history or parallel time stories I want. Will definatly run a bit of Vikings and Rome this year. My Rome BRP has been on order now for about 3 months and getting time to hassle  them again.

Nice to see my fave models as a kid still being made under different brands. Some of the Caeser brand modern terror/militia/special forces sets have a few items that look like action movies too.

Alas there are no martians with set of tripods like these but Mars attacks and that war of worlds miniture game are just for that. Some more animals and dungeon monsters would be awesome. A set of Uniformed security, armed suits, yakuza boss with swords and other corp theme could be nice for spy films. Heck boiler suit lair mooks, hippie protesters and riot cops could be cool. Mad Max this scale would be awesome. Games featuring those things could be interesting. Battle suit infantry and super heroes too but sounds unlikely to happen.

Im after copies of these RPG products at non dickhead prices

Two of these I ordered from Amazon in november and no show yet. I keep missing out on auctions and ive been wanting these for years to run my Arkham county sandbox game again. I have some as legal pdf's but real thing nice too.