Babylon BRP: To Serve The King 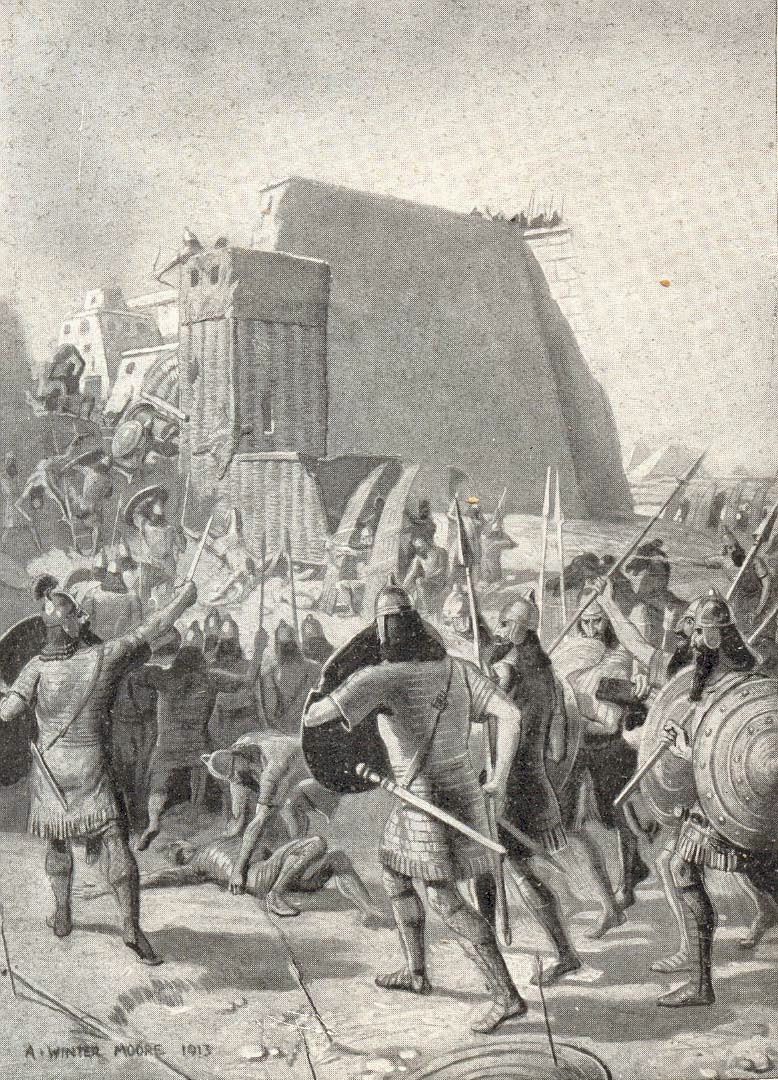 So having fled the City or Kartulu, half sunken and degenerate worshipers of forbidden sea gods and dragons, the heroes returned to the city of Umma.

They told their friend the king how the residents of Kartulu were evil cultists who were best destroyed and scattered to the winds. The kindest of the party, the Amorite Charioteer Sobek suggested they be rounded up and sold into slavery for their own good with the active cultists beheaded and burned.

Toth warned of their black magic and witchcraft.

The king considered their words and considered casting out the street of merchants and fishermen of Kartulu in his own city. He would speak in secret with other kings and asked them to tell the king Samsu-iluna of Babylon about the matter.

So back to Babylon where the heroes returned to their homes and loved ones. Many now had church obligations. The noble born half siblings were put to work with managing family affairs for months.

Ariana the half Minoan pirate maid worked with her church and fathers trade houses and learned many new languages. Spent time with her Assyrian husband. She was pregnant again.

Toth the half Egyptian was not ordained and was happy to be an initiate of Nergal. When not working with father he spent time social climbing in Nergal's holy city of Cutha. He was well reguarded by the church and finally got to befriend the king of that city.  Performed various rituals with priestesses of Erishkigal and spent time with his new serpent spirit wife and managing his estates. He became familiar with noble funeral rights his city was famed for. His bride bore him a healthy child.

Kull worked mostly with the temple of Marduk, leading and converting barbarians like the Gutians into the service of the empire. He set up a war dog breeding farm in his former shack on his property. He was very assimilated now and Gutians no longer recognised him. His brother was in Umma with his beautiful young wife serving the king there.

Sobek spent time with her pets, children and shaman-lover. She was very pregnant. Her pets got into a fight. Her terror bird and lion cub ate her monkey. She had warned it a few times. With her husband she re-learned all her magic to perform better in combat. Her sister and house maid learned a spell to create temporary perfume. Her follower was sent to fighting school to learn to be a better bodyguard and shield bearer. She had been training the bird to be a mount and ride on her chariot.

All become more familiar with chariot to in hope each could have a chariot for themselves and servants.

After four months during the wet season when the city streets were flooded, they were presented to the king of Babylon by their father/patron. The king was fearsome and silent but he warmed during a feast they were invited to. The king spoke to each hero and was obviously well informed of their actions. Notably the party had been to the four corners of the earth and had killed many witches and monsters. Most had brought their wives and were wearing best clothes and heaped with exotic jewellery from the heroes travels. Ariana especially had a fortune in gold jewellery and made a point of showing her boobs. She hoped the king wouldn't fall in love with her.

Kull was asked to recount his encounters with Dragons in Kartulu and the Mediteranean. Sobek was talked to about lion hunting and Chariots and the king was interested in going on a hunt some time. Toth spoke of the ancient funeral rites of his city and mothers homeland of Egypt. Also of his encounters with the underworld. Ariana spoke of her youth as a pirate and the king was especially interested in what Mediterranean cities he should conquer or trade with.

In the morning after a late night as the kings guests, they were summoned to a garden courtyard where the king spoke to them. He explained their father/patron had given them to him to be his agents. He wished them to eliminate cultists and witches who served wicked gods. Pretty much what they were already doing but now with status. Kull was made seal bearer of the party with documents from the king insisting all assist and aid the party which should intimidate most city state kings.

They were instructed to head south as the north was frozen and windy right now and boat should get them speedily to the south to the city of Lagash. Toth was pleased as his wife had mentioned going to the city. In the meantime they were to enjoy the extra holy holiday month that adjusted the lunar and solar calenders every so many years and participate in the Yearly ceremony on the great Ziggarutt of Babylon. There they would view the high champion of Marduk in his dragon armour  execute and dismember a captured Elamite prince representing Tiamat. They were also introduced to court officials that might aid their quest against Asag the stone giant, the Anzu bird, Tiamat the chaos dragon and Humbaba the wind demon.

As they had a week before the ritual they joined the biggest party they had ever seen, all across the city was dancing, singing, drinking, processions and holy folk in ritual dress.

On the fourth day the head of the secret police called them in. He was wary of them but he had a problem in that the sacrifice had escaped using his Elamite witchcraft. The guards who failed were tortured and executed just before heroes arrival and they were called on the find and capture him withing hours. Every city gate would be watching for the man so he would be looking for something different. Kull brought in his trusty war mastiff. A slobbering brute of a dog worthy of a Marduk champion.

Sobek used her shamanic magic to speak to the dog and also sent some doves to look for the man. Arian consulted her weather divination, sensing the villain would escape by the wall where there were few witnesses on the outside. Toth called on the vapours of the underworld huffing on incense determining that the man had much magic and his body was covered in tatoos. Kull cast dragon and manticore teeth determining that the man would seek countrymen for aid. All followed the fresh trail through the rope makers district as it was fresh and the dog tracked it easily. Found a tavern full of Gutians with two suspicious Elamites. They saw the men react to them and try to leave. Sobek told the dog to guard the rear exit of the tavern as the heroes all entered the courtyard. The Elamites spoke in Gutian that the newcomers were enemies of all Gutians and had spoken of them as cowardly wet nurses. The Guti arose angily but Toth in his original Guti dialect barked out that the Elamites were liars and cowards using them. The men fled out the back and were bailed up by the dog.

The men were thretened and confessed the escaped Elamite prince was afraid of water and planned to cross a wall. Kull and Toth set off with te dog. Sobek ran to the wall section to cut off the sacrifice and Arian grabbed some troopers to help and watch the men and headed to the wall.

Sobek waited among the reveling crowd and missed the robed man climbing the guards stairs on the wall, large enough for chariots to drive around. Toth shouted to her and Kull set his dog and cast a disrupt hex on the man. The public would normally be outraged by public magic but when they saw the dragon warrior of Marduk the crowd parted. Sobek still very pregnant ran behind the Elamite prince and punched him in the head. Meanwhile Ariana seeing this shot the man in the leg. The prisoners from the pub became unruly and began fighting the troopers but Ariana ignored them. The prince overwhelmed by damage fell down the stairs unconcious. Sobek first aided him and Toth ran up and bound him completely, blindfolded and gagged. Kull ran to help Ariana and the guards killing one prisoner and the llast one surrended. He earned a less horrible death for his surrender.

They returned the prince to his scell and the Kings spymaster was pleased, eve impressed.

The ceremony was a success and Marduk accepted the Elamite sacrifice. They watched him be dismembered on the ziggarut and his chunks of body raised to the crouds as the creation story was sung by priests. This was how Marduk made the world from the corpse of Tiamat.

One day rest and then a peaceful trip to Lagash by boat.

--------------------------
A little bit on Humarabi the kings father and his awesome code of law
"Anu and Bel called by name me, Hammurabi, the exalted prince, who feared God, to bring about the rule of righteousness in the land, to destroy the wicked and the evil-doers; so that the strong should not harm the weak; so that I should rule over the black-headed people like Shamash, and enlighten the land, to further the well-being of mankind" 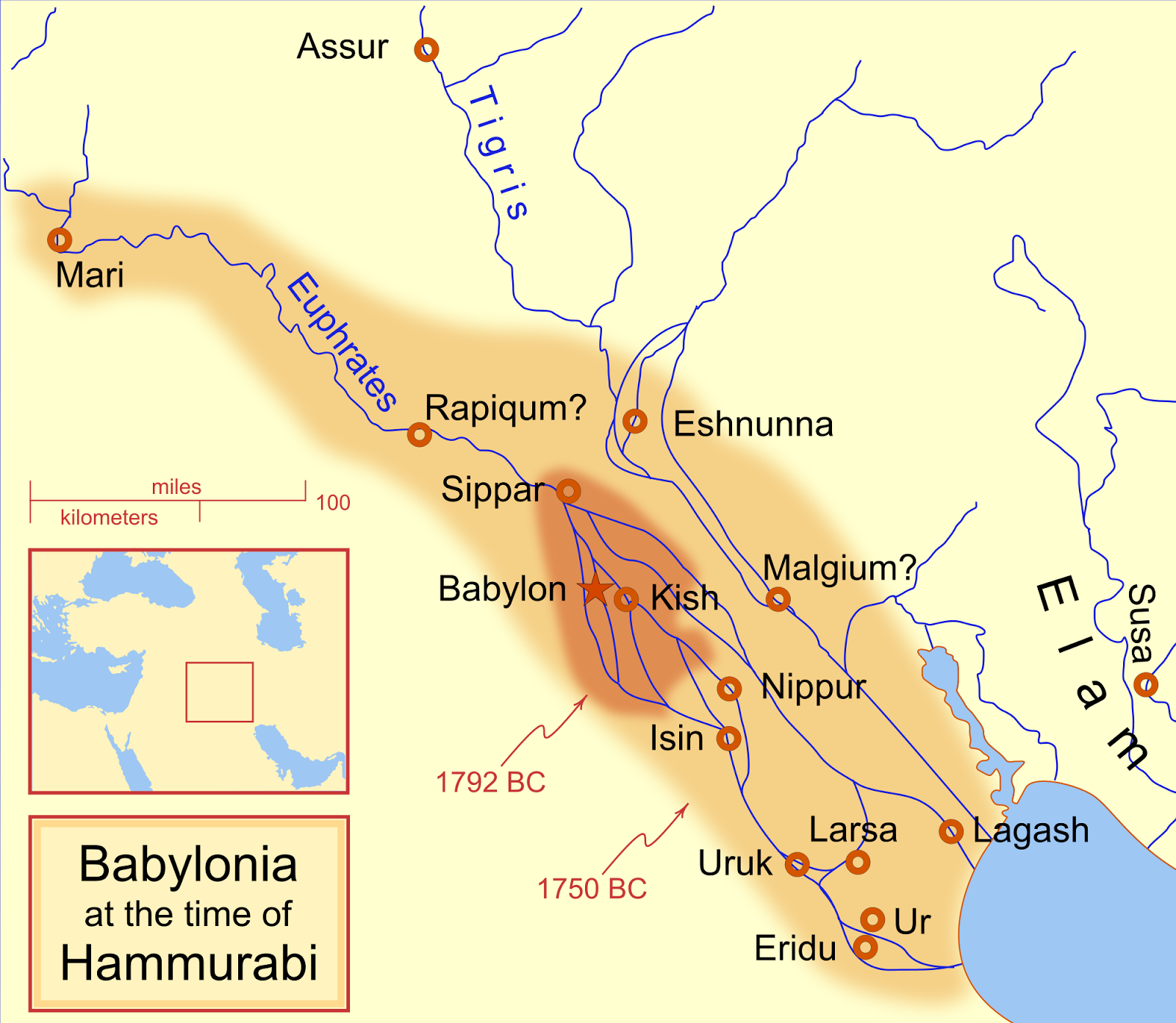 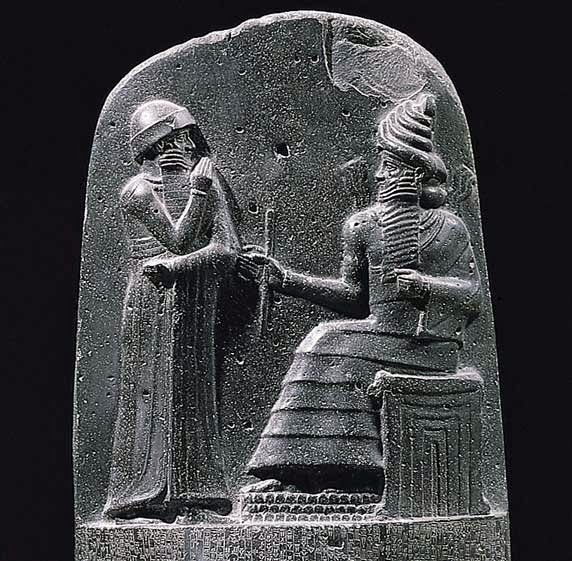