Babylon BRP: Into the Wasteland 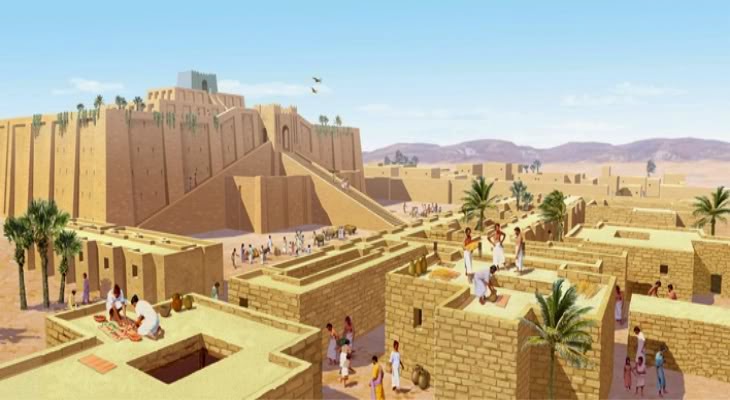 So the heroes arrived in Ur with the prince who summoned them and arrived in the court of the King. The awaiting the was their sister Iltani. They had left her in Knossos several years ago. She demanded her share of treasures and her magic tiara back. After calming her down and explaining how they fled palace in the night after killing minotaur was no time to find her. Iltani explained how she was forced to serve Poseidon to atone for her sins against the god and that the god expected them all to surrender to his temple. She spent years questing around Mediterranean.  Party agreed they would wait till Empire got to the northern sea by conquest and they had a need to cross waters. Ariana was most saddened her family would probably not see her for a long time. Still after the squabbling they were glad to be united.

The king of Ur had a daughter kidnapped by arabs from the gardens of Ishtar. They were abhorrent cultists of some sort of daemon sultan. He begged them to find the girl and avenge the Ishtarian priestesshood. There was a great oasis they were to find where they worshiped the moon god Sin as did the men of Ur. They would help the party find the heathens.

Divination revealed struggles and hardship. Packed chariots with water and food and set off. Through the western wastelands they saw gazelle and ostriches and was mostly peaceful by day. By night heard some animal growling in darkness creeping near. Dawn saw huge footprints of a unrecognisable beast. It was like a lion or a hyena they saw in Africa but neither. In the distance later that day saw four lions. Big ones with manes like ones they saw in Africa. As got closer saw they had huge spiky tails and flesh faces of me. The sun glinted from their rows of shark like teeth. Manticores!

They charged at high speed and circled them shooting them with arrows and javelins. The beasts swore at them but they were too slow and dumb so died easily. Sobek skinned them now everyone could have a manticore cloak. That night the mystery beast of darkness came snuffling around them. Sobek who could cast a shaman spell to speak with beasts called to it. It complimented her how delicious and sweet she sounded. In morning she suggested they try and pretend to sleep next time and lure it in close. All agreed this was wise.

Next day saw a hermit wandering alone. As got closer saw was a arab with a turban who had a mad gleam in his eye. That was enough for Kull who charged his chariot and ran the man down as he chanted something. His impossibly broken shattered body twitched and kept chanting for a time then shuddered to a stop. In distance a beast was spotted from a great height. Some kind of hideous dragon but Kull saw it was not a true dragon his cult could command. As it swept in they were struck by horror. It tor head off a donkey on Kull's chariot and he jumped off. Sobek rode along side to calm the screaming donkeys fleeing out of control. She hit its wing with a javelin too. Ariana got two good shots in belly and as flew at Toth he leaped up and cut it's belly open killing the beast. It's stinking black blood left stains on Toth and the donkeys, but fair Ariana dodged the dragging entrails of the beast as it crashed. As usual they went to claim trophies but the beast was putrefying in the sun and smoking.

They saw a oasis in distance that was fair with topless maidens, date palms and inviting tents. Sobek sent a dove who said everything looked great with tast grain scattered everywhere. Iltani and Ariana agreed was in wrong direction and not to be trusted.

That night the black beast of darkness came closer. All hid in ambush. As it pounced they leaped to they're feet and struck at it. Seeing the demon of darkness properly for first time they wailed in fear. Sobek could merely copy her friends, her own will shrunk in despair. It was a black lightlss sillouette with a lion like body but huge crocodilian jaws. It's eyes were white slits and it's breath was fowl. Mortal weapons could not harm it but the heroes armed with magic treasure weapons from across the world slew it. Thoth knew it was a avatar of Nyalathotep. Sobek grabbed a juar of palm wine and began a lifetime habit of drinking to forget. he had spoken with the god and seen his otherworldly palace and been offered power.

Next morning arrived at true oasis. Welcomed by curious locals who offered to buy their goods and women. Ariana managed to offend local men and Sobek joined in til Sheiks man calmed situation. Tensions grew at suggestion women be put in stable, with Iltani outraged at ignobility of locals. Ariana bought a local dress and covered herself which satisfied the locals a bit. Met the Sheik who was more open minded and had a large harem from many lands. He served the moon god and was willing to aid in killing the outcast cult and to aid the men of mighty Ur. Ariana got a bit drunk and while in bathroom, Sobek accepted offer of Sheik to spend night with him. She told Sheik Ariana was married and he thought Sobek the warrior woman charioteer was a exotic delight. Ariana was grumpy that Sobek told everyone she was married. Some discussion about her virtue and how many she had slept with out of wedlock.

In morning Sheik gave them rations and a shepherd boy who had escaped cult. Boy had parents killed and would help them find the cult lair. So a few days into the worst wastelands till they came to rocky plain that Toth had dreamed of huffing temple incense in Ur. Chariots had to go slow but Illtani assured them her sorcery could mend broken wheels if they needed to risk moving faster.

Saw cut stone rubble and a ruined temple with square pillars. Kull saw boy in chariot whisper into his hands and release a moth. Kull kicked him from the car and set his huge fierce warhound on the screaming boy. The savage brute tore off his arm and tore out the boys throat. Others wondered about the justice of this when they saw turbaned heads pop up in ruins. More men were seen running for cover so heroes began shooting and hurling javelins back.

Dozen began casting missiled at the heroes and the chariots were very effective defenses. Kull pulled up and jumped over a wall hacking into them with his huge holy axe. Thoth and Illtany went for a flank using wall as cover to attack several men. Ariana with her bow was picking off many but she was caught in rain of arrows from topmost part of ruin. Sobek jumbed on her terrorbird and they charged into the centre to break up the kopesh wielding warriors charging from the temple gates. The bird was hardy and deflected many attacks and dodged others, easliy killing men with kicks and nips from its axe beak.

More warriors poured from behind front of temple ruins and two camels each with two archers riding came from other side. Iltani injured the camels panicking them and Sobek told camels who had knocked off some riders that the cultists were planning in eating them. Illtani with her mace and dagger killed many while Toth cleaned his way to rear of the temple which was really just a facade of the front and rubble. He saw ladders going to upper tiers where javelin casters and archers were so he began to climb up.

Kull with his armour and protective spells felt invulnerable and took on five men. Ariana shot a few in rear and was missed by dozens of missiles from her covered position. Sobek and her bird took a few scratches and went through the doors. Commanded her bird to kill men trying to remount camels and she tried to climb other side of temple. Iltani ran about behind temple killing more stary men. Camels were doing best to get away. Toth ran along battlements knocking men to the ground. He hen went up to the top tower to get archers on top. They stood on the trapdoor but he was so strong he lifted them off, one falling to death. Sobek tried to jump off wall onto her bird and missed but she landed unharmed on her feet. Last archers jumped to deaths to avoid Toth while Kull killed the wounded and dying. Terrorbird managed to get a few bloody gobbets of flesh to eat.

Found a trapdoor into underground lair their prophecies predicted and made camp to rest. All pleased with battle, over 42 dead men and two camels captured.

Next: Into the darkness 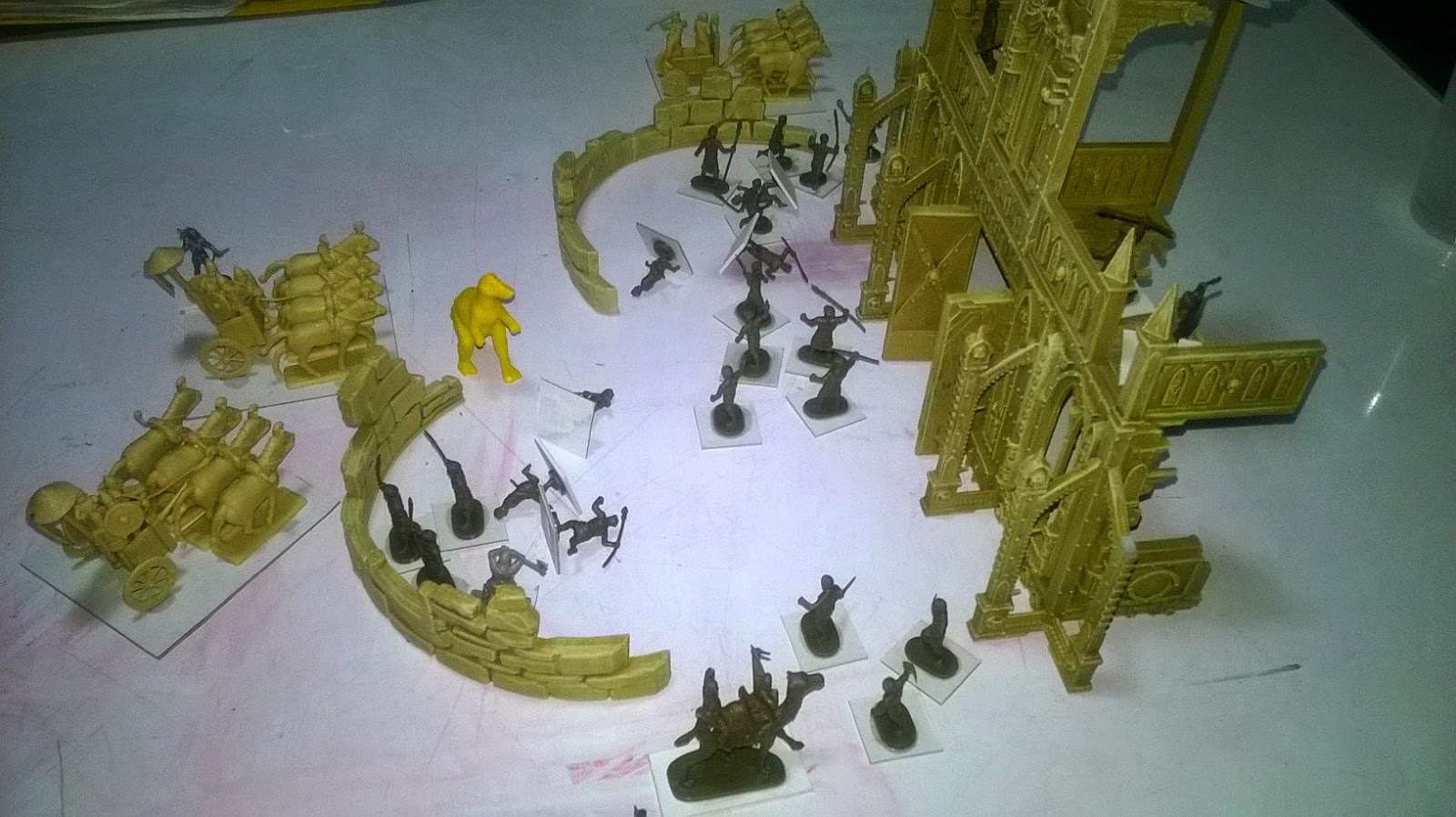 This was the battle, heroes on chariots and cultists in their ruined temple. The yellow dino is actually Sobek's terror bird. Was a very exiting battle with lots of Peter Jackson-esque comedic fumbles and falls to the death. Thats Ariana behind chariot parasol. Kull with big axe by curved wall.
Posted by Konsumterra at Monday, January 26, 2015