Babylon BRP: Into the Underworld 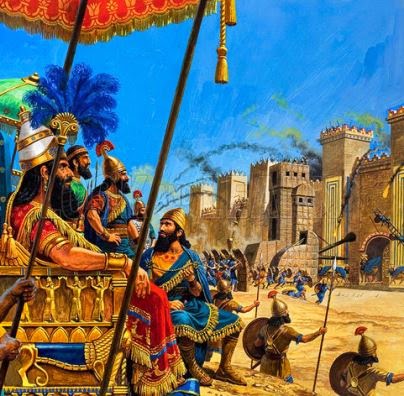 So have my mini collection growing - have Hittite, Sumerian, Sea People. Assyrian, Arabs, Assyrian allies (i will use for Babylonians). Getting Indian and archean greek and egyptian next. Fantasy sets by Caesar are awesome and getting 6 boxes or orcs, elves, skeletons, dwarves. Have at some other gamers interested in 1/72 ancients and am getting 1/72 fantasy box sets next at a good price (less post than from USA). No clubs in NSW doing this scale so im going to have to make my own scene much like i do with oldschool rpg's. Will be getting 1920s and modern special forces and insurgents too. No good sf this scale i can find.

The party arrived in Lagash as King has sent them to work in south where Babylonian control isn't what it could be. The heroes got in their chariots and donkey battlewagon and set off.

Toth the half egyptian hero of Nergal with his snake goddess wife
Ariana the half minoan beauty, former pirate and hero of Adad the storm god
Kull the Gutuian now a hero of Marduk serving Babylon by taming barbarians
Sobek the barbarian charioteer with her pet terror bird, a apprentice shaman of lion cult

Admired the acres of fruit trees and vines surrounding city but could tell was not as lush as it ought to be. Presented passports at Lagash and overjoyed guards sent for priests. All seemed very happy and invited party to the Temple of Ningizzida. Heroes wary but taken to meet priests and the king. Apparently they had forfilled a prophecy by arival and priests asked them to enter the entrance to the underworld and restore the flow of life from the depths of the earth. Heroes accepted. Toth knew locals had different idea of underworld to his own adopted people in the city of Cutha, sacred of Nergal. His wife urged him to go. She was kin of many of the snake divinities on display in the temples. Cadeceus intertwining snake motifs, snake headed women, horned adders in fruit trees, jeweled beaded men with snake bodies and many more.

Night before Ariana got horribly drunk flirting with snake priests and the others practiced divination to learn of perils ahead.

Under the temple a crowd of city notables gathered to see them off. In a great chamber they saw gates, covered in copper with designs of the underworld powers: Ningizzida, Tammuz and Geshtianna. The great bolt was opened and music priests rattled cistrums, blew horns and plucked harps. Holy singers chanted as doors opened. Eerie mist wafted out and heroes entered the depths.

In a great fog shrouded chamber they marched across dusty floor into the unknown. Found a stream with a old man with a jeweled beard fishing. He smiled at them. They spoke in Sumerian and he was a minor divinity of fishing and wisdom allied to the serpentine powers. He told them the stream source was blocked by a evil hydra and if they killed it he would give them a magic cave fish each.

Marched on and saw a village of snake headed folk. Tried to speak to them but they were hostile and kin of the hydra. A fight broke out and many snake men injured before they fell back. Toth was poisoned and could not go on but Kull called on Marduk at some personal cost  to heal him which impressed all. Wounded party fell back to the old man and rested. Returned to the path next day and avoided snake village. Saw a great golden goat grazing on sleeping vines. Sobek who loved all animals spoke to it and it offered some fleece if vital forces released. Later saw a bejewelled maned giant lion which Sobek spoke to learning secrets of her own lion cult.

Finally they arrived at a great Zigguratt with dry creek beds heading in the four sacred directions. Climbed to top and entered shrine cautiously to see a great well inside. They called out and the hydra arose with six heads dripping venom. It would not move or be taunted from its position no matter the insults hurled at them so they attacked. It was a long battle as they well healed the Hydra. Eventualy they hacked off its heads and dragged it out, hurling it down the stairs. Collected it's teeth, skulls and hide and witnessed the sweet holy waters begin to flow.

Sobek met the goat and received some gold fleece. Each got a magic fish from the old man which made them healthier and spent night with him. Ariana seduced the man as rest slept. Morning they returned to the geat where the crowd had awaited them for three days. Already the orchards were bearing fruit.

The grateful lords of Lagash gave them silver and promised to send priests to bless their crops and beasts. They knew secrets to grow fruit trees overnight and would plant a orchard on Toth's Estate. A great feast was called and heroes got to be paraded through city. Became evident this happened every thirty years for thousands of years.

As party subsided a prince of Ur came, calling them to help the king on a urgent manner.
Posted by Konsumterra at Monday, January 26, 2015