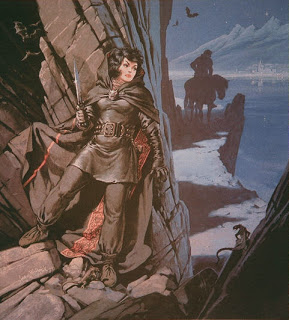 This completes my primary classes - next will be racial classics of elf, dwarf and halfling - the fourth my Tako race was done earlier but i might go back and revise.

Rogue is actually the most changed class. He is tougher than d4 or d6 hd versions - he is a capable martial artist. Also they are the best at NWP skills having the most slots of any class and a list of skills that are as good as spells or magic items. Every lv they can grab a whole new awesome NWP, not just get a few % in same old skills.

-Back stab attack +4 to hit x2 damage then x3 at 6th then x4 at 12th then x5 at 18th if surprise victim first hit by melee attack in the back
-Sneak attack +2 hit and +4 damage surprise attack can use with missiles or even face to face - study target and aim full round before attack
-At 4th level get a trained pet or apprentice for a follower
-At 5th Level you’re gang rank is raised to master, taking orders from the real guild master and operating your own chapter
-At 6th level Attract 1d4 thief followers and get one more each lv
-At 10th a Rogue establishes a HQ for their organization and is a guild master and gets 2d6 gang members.