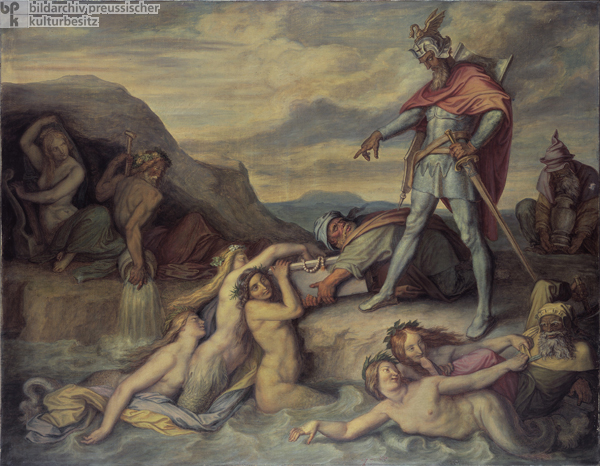 This is section 3 from my DnD home clone rules this site named after. As I'm running several gammaworld games and DnD is in hiatus I'll go back to refining my EMO rules set. Some people are curious about such things. It will let me have some more content here for a bit too. I should be writing invoices.

3.Attributes
Roll 4d6 to generate 6 numbers – any below 9 raised to 9
you can subtract points from some stats and add to your class prime stat
9 lowest you can reduce to and 18 max you can raise a stat to this way
(my d6 dice could possibly be bad – only 1  newbie got a gross character this way)

Strength
bonus damage all weapons
Warriors Prime
breaking or lifting things, a measure of physical muscle power and carrying capacity
Take Str if you want to pack a mean punch in hand to hand and carry more loot

Constitution
bonus to hp every lv and daily healing, survivable negative HP score
Dwarf Prime
poison or disease or fatigue saves, a measure of health, durability and powers of recovery
Take Con to be resilient to physical harm and bodily threats

Intelligence
bonus proficiencies and languages from any list
Wizard or Elf prime
searching and detecting saves, a measure of learning ability, memory, perception, education
Take Int if you want additional starting abilities normally outside your Class and alertness

Wisdom
bonus number of second chances
Priest or Monk or Monk prime
resist psychological or magical effect, measure of faith, persistence, bravery, sanity and will
Take Wis if you want to be mentally resilient and have more second chances (see below)

Charisma
bonus loyal companions and number of personal retinue
Bard or Sorcerer prime
aid morale and diplomacy,  a measure of ability to charm, leadership and appeal
Take Cha if you want to be a leader or communicator or just get positive reactions

Other Benefits
Attributes are used as basis for saving throws with a d20
Dex vs blasts, traps, breath weapons
Con vs poison, death, fatigue, disease
Wis vs spells, mental or psychological effects
Situational, class, NWP and WP mods can all apply

Attributes are used as basis for NWP rolls with a d20
Add +1/3lv to rolls to reflect improvement
Roll made by +1-2 required number  = made it but close call
Roll made by +5 required number  = quality success
Roll made by +10 required number = master success
Some proficiencies like sneak and hide or craft skills can be rolled together for ease or enhanced affects.
Some proficiencies can give a +1-4 bonus to another like Tumble or Acrobatics could give +4 Jump. These are decided on a case by case basis with the player or DM able to make suggestions. Be generous if lots of skills overlap.
A common NWP like spot or climb has a base of 1/2 the normal stat if anyone could do it
Often a skilled person does not have to roll in a non stressful situation
Extra time (+2-4), quality tools (+1-2), spells may all help

Dexterity and initiative
Initiatives are 1d10 per side + individual Dx bonus and weapon modifiers for length and speed may be used if   a close call between sides. Usually roll per fight but a skirmish in a scrub may dictate radical changes in battlefield superiority.  Fast  draw  weapons are always ready. -4 on d10 if weapons not ready or may miss action if surprised. If a side is surprised or  ambushed one side may get a free action before initiative rolls.

Intelligence and creative character creating
Bonus proficiencies and languages gained can be exotic and from any type you can make normal class characters more interesting.  A wizard could take long sword and light armour. A Warrior might want wall-running and sense-magic. A rogue could get Use Arcane Item and have a familiar pact. A priest might just take lots of combat skills for his mace and shield. Languages give you cultural knowledge also and having a language of some exotic type can be handy for meeting strangers or reading messages in ruin pictograms.

Wisdom Bonus and second chances
You can pull feats of persistence by sheer will or is it the grace of the gods after all?
Can have one plus WIS bonus number of second chances per session
you can spend these chances on:
1) heal 1d4 damage or can stop bleeding with this
2) re roll any dice again then pick best result
3) change one spell in your memory to another through great foresight
4) have one piece of common equipment you ‘almost’  forgot to bring

another option is to adopt my card system (appendix) and everyone gets a draw or redraw card per game and Wis bonus provide more. Wis useless for non Priests in most games.

Charisma Bonus and followers
You can keep a band of hireling personal retinue up to your Cha score. Everyone gets one and your bonus in loyal follower companions who will go with you to hell. They are guaranteed fanatic in devotion to you. Classes grant special followers too but they may not be replaced as charisma derived followers.

You can try to befriend any encounter you meet or re-discover a lost companion. Some people you meet will volunteer to be your companion or apprentice. Make a Cha roll on a suitable target and use gifts to get a bonus to recruit followers to try to persuade a potential available follower. Some persons may already have family or cultural commitments and be unavailable. Young bastards for example are easier to recruit than a prince or a married shop keeper. Many player groups play mostly spell casters and hire muscle or use followers. Followers Lv or HD usually two ranks lower than yours but natural unintelligent animals can have equal HD.

When followers die you can recruit new ones unless you have a rep as a companion killer. Some followers may adopt a character class and become 1st when you reach 3rd Lv. A player can start with one follower but might want to wait until they are higher lv to recruit all he can. If a follower dies or is dismissed the slot can be refilled. Some followers support you but dont come along - a wife who stays home, a steward who runs your castle, a lord who aids you dealing with law, kin with financial support.

A panicked follower will break formation, and will move only backwards, if pursued by disciplined troops or fail a second morale test they will full speed flee until danger is out of sight. They will get one more test to hang around or will scatter for days if they fail.
Panicked  personal followers will withdraw but will seek to help with missile or other support if possible.
A hero may pursue panicked persons and make a Cha roll to reassert control of a group 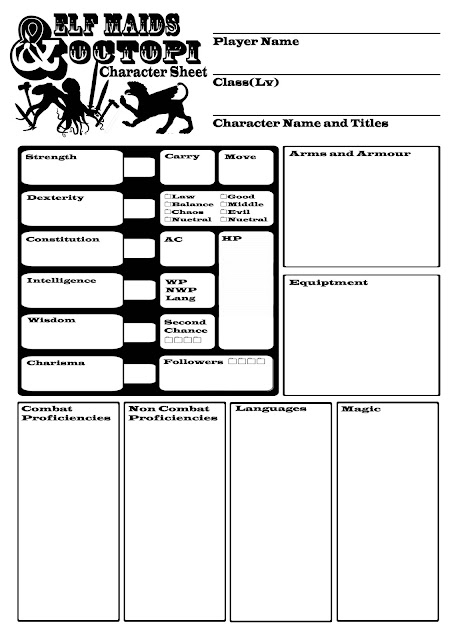 Posted by Konsumterra at Thursday, November 15, 2012