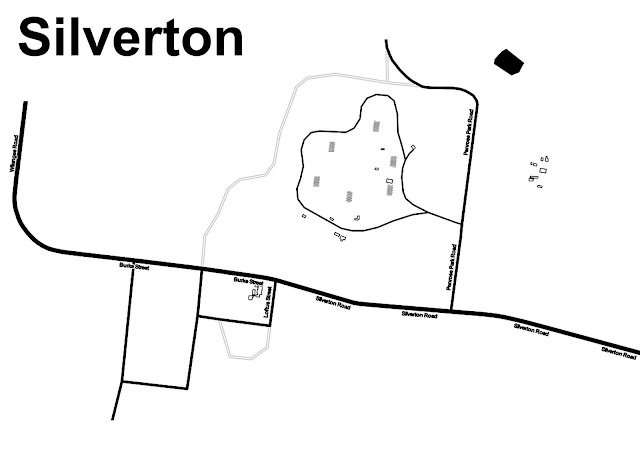 Silverton is a small town to north west of Broken hill predating the Warlord's Silver Town settlement (formerly South Broken Hill). It is a source of many raiders and resists the warlords power. The remnants of a small town that always looked like wasteland compounds and home of the Mad Max museum, a famous treasure trove that is a holy place to raiders and wasteland scum. They are led by Mortis, master of the wasteland, a former bunker trained military man who has many allied gangs in the Broken Hill ruins. The continually bother the Warlord's domain, keeping the warlord from spreading territory east to the soft farming folk. Heaven help them when Mortis dies without replacement or the Warlord and Mortis unite.

1 Motorheads vehicle obsessed tribe ho operate a sozen plus bikes, 4 scout buggies, 4 battle cars, a tracked transport and a war rig truck mostly used for moving water to other gangs for fealty or other goods. They have 40+ men operating vehicles. They have quite a few cartridge based weapons used from vehichles that make the gang superior.
2 Flyers a small clan who operate 6 ultralight scout aircraft providing superior air support. They are wary over the ruins of Broken Hill due to flying monsters. They drop bombs, molotovs or shoot light automatic rifles. They number  about 30.
3 Mechanix are 30+ gang mostly working on fuel, repairs or keeping town machines going. They operate from the holy Mad Max temple, where all wasteland warriors came from according to them. They worship machines of all kinds and most carry muskets and iron black powder grenades.
4 Water Boys have a bore with a underground cistern, water purifiers and a solar hydrogen splitter to make fuel. They also operate a large air still that leeches water from the air. They also trade water to other raider gangs in the region cementing their loose alliance. The distil alcohol, brew beer and biofuel from anything organic even people. They are the least committed to Mortis and he makes effort to watch them and keep them on side. They avoid fights but carry large tools like wrenches and spanners.
5 Hell's Harpies a all women raider gang and the most cruel. The share their favours with only the bravest warriors and keep female slaves as breeders if not fit to fight. They raise all the children of Silverton. They often whip other raiders in battle, shoot any who retreat, yell abuse to fighters who fail and promise rewards to the heroic. Most of other raiders fear them as crazy. Mortis is married to their Quees Tabitha but both keep harems as it is mostly ceremonial. Mostly use crossbows and archaic weapons as more personal. There or about 60 of them with twento of those breeder slaves.
6 Chromers are drug and solvent abusing maniacs who take suicidal risks often a company vehicles and get juiced up before attacks. 50+ members often bald with silver make up. They have a few robot members who hate humans. Mostly they use crossbows, daggers, javelins and spears. They constantly recruit to re[place those who die.
7 Flesh Fiends are a ruthless cannibal gang who capture and cook human flesh and mutilate themselves. They like chopping and hacking weapons but also nets, bola, man catchers and lassos. They are highly feared maniacs with 40+ members. They are feared and have clans in the ruins also.

Other Notes
They also have refurbished a old prison for captive slaves and meat for cannibals.
There is a notorious pub where worst raider scum party.
They operate a school run by the harpies for their own and kidnapped children.
They operate a bakery.
A church used  as a meeting hall and raider rituals
Have their own race track and yearly vehicle combat race
-car with most laps wins

Raiders seek prisoners for slaves or meat, children to indoctrinate, grain for bread and beer, vehicles and machine parts plus weapons.

Any attacks on the town must face aircraft scouts and vehicles. As the warlord's warriors lack enough transport and have failed before due to aircraft they await the right condition, especially weather that might ground ultralights.

Adventurers might be recruited to infiltrate, raid by night or kidnap someone for intelligence or assassinate Mortis. Getting the Water Boys or or Flyers to leave could cripple the town.

They often open the town to race events a good chance to visit not as a enemy.
Posted by Konsumterra at Wednesday, February 27, 2019