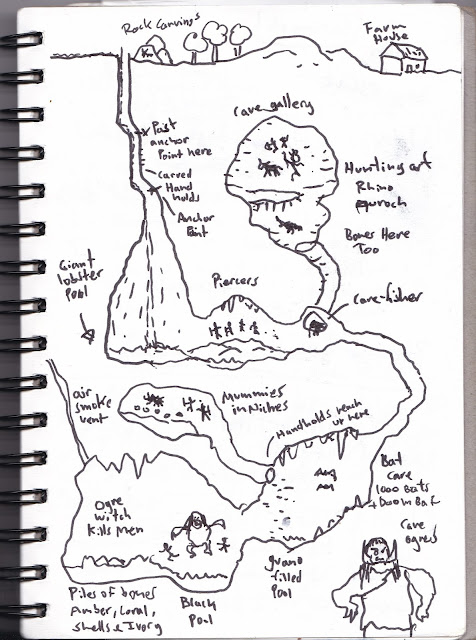 A local cave thought to be a witch hole long ago has been blamed for the disappearance of a children and animals over the years. In ancient times cave folk came here for secret ceremonies. The men performed hunting rites in the upper caves. The deepest cave is home to a lady ogre magi shaman. She used to receive sacrifices to not eat people, give secrets or treasure. She tolerates women who bring a sacrifice and attacks men. He has long hair, is naked with blue-black-grey flesh and a blood red mouth with fangs. She has long black hair, tusks and long iron claws.

The chimney has some old handholds in key points indicating past use.

Other dangers include giant bats including a doom bat, piercers and prehistoric mummies of the elders.  A cave fisher and cave lobsters might be a problem.

The cave is rich in artwork.

Bones, teeth, tusks, skulls and horns of ancient game animals can be found. The hunters cave has obsidian and flint weapons, several are magical.

The mummies have coral, amber, tusk and cowrie shell beads and a d4 ornate copper tokens of value to collectors that do not tarnish and can cut or be used to start fires or skin a animal hide

A Skull with a trapped ghost that if released must obay one command
A basket of holding carries 100lb but weighs 10lb
Club does a d6 but can hit magic and has a extra attack
Bone ring of water breathing
Copper bowl filled with water makes flattering reflections of viewer
Comb if used can add a d3 inches to your hair length a day and makes hair shine
Posted by Konsumterra at Friday, September 29, 2017