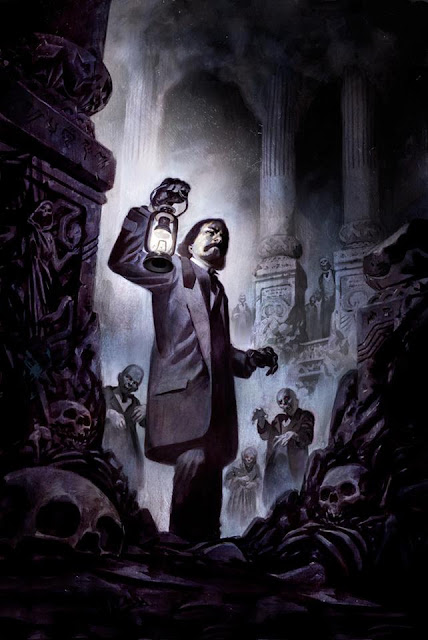 A while back I came up with the idea of using morale rolls not just for cases of fear and combat losses but obedience in general. This is especially useful when using hirelings of different alignments or hiring those murder hobos you found in the gutter. Moral is not just courage it is a measure of obedience and discipline. It is a entertaining mechanic for the GM to use in all kinds of situations.

The gist of this is your hirelings might disobey at times if loot easy enemies present or loot themselves. Battles have been lost because men broke ranks to chase fleeing enemies only to be wiped out by cavalry.

Troops and mobs have always had these problems come up which morale seems appropriate for. A canny enemy uses these things to bait ambushes or throw off pursuit. Burning a enemy flag or shrine might be used to taunt troops into breaking orders.

I give fighters a command radius equal to CHA + Lv in battlefield inches (10ft indoors 10y outdoors). Other classes get CHA Bonus only. The command radius is the are of effect of a heroes attempts to rally troops with broken morale. Typically you get one chance to rally troops but a fighter can try once per round to a number of times equal to their level.

Followers gained from charisma or level and class are for more obedient and normally only flee or disobey if injured or numbers killed.

In normal combat moral rolls are made:

Also:
Resist urge for looting if treasure visible or men hungry and food visible
Resist urge to for fanatic desires like burn a witch or attack a pagan church or hated enemy

Looting
The enemy has routed leaving payrolls, weapons or armour on the battlefield. A city is burning and the army has fled. A fleeing caravan scatters wealth and goods in wake or even food too distract pursuit. The troops may require a morale roll to keep following orders and not break formation to start grabbing treasure and prisoners to torment. Starving men might be tempted by loot. Women starved men might be distracted by fleeing nuns. Alcohol or honey might work as well and sometimes a enemy dumps such goods or even poisons them to throw off or weaken a enemy. troops might want to grab loot and quit instead of pursuing enemies or moving further into enemy land.

Fanaticism
A band of fanatics might be distracted by idolatry or other religions and tear off to pull down a idol or burn a rival religious sanctuary. A person eating a sacred animal or some other conduct could rouse a angry mob. Prisoners of certain types might be difficult to keep if troops feel disposed to tormenting or killing them. troops might break ranks to chase scattering hated enemies making them vulnerable to a disciplined counter attack.

Other Desires
Specialist troops or casual hirelings may have other moves and require a discipline checks. Alignment might play into this. Evil troops might want to torture prisoners. Chaotic troops might want to go home or renegotiate their contract. Lawful troops might want to turn on chaotic troops. Individual hirelings in a dungeon might have other problems. A follower thief might be tempted to snatch extra treasure, pick party members pockets. A crotchety maniac might become enraged and attack a bossy superior. A captured follower might get a morale check or might sell out a party providing names and other habits. A cultist might turn if he sees a familiar idol in a dungeon.

Mostly a demoralized group will break up from formation on a first failure and flee on a second.

Thanks to Ivan Sorensen for feedback on this in G+