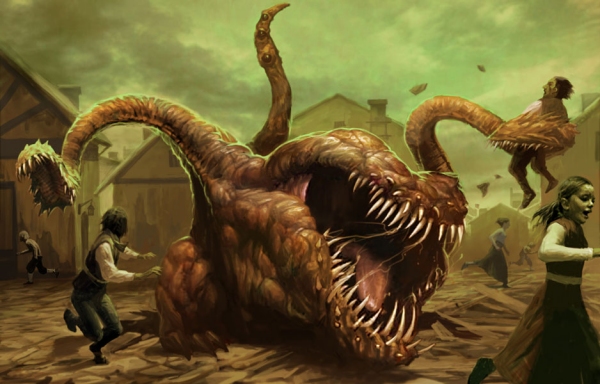 OK so next will look at MM2, the BX monsters and im looking at the Dragon Creature Catalogs becauses they had some nice planar monsters. I might have trouble getting them because ppl tended to seperate them from mags (ppl like me...).

Aboleths - awesome critters to live in deeps of Xor

Afanc - big killer fish with 15HD could be handy

Ant lions - someone has to eat those ants

Bat, Mobats are good riding bats, on Xor lots of bats are albinos

Deathwatch Beetle - these really freak out high level players when make those death saves, many a follower in my games has died from these

Boggle - kinda pathetic and funny googly eyed guys who scuttle about Xor. The can communicate by ear wiggling

Boobrie - giant bloodthirsty herons with bat membranes instead of feathers

Daemons - In my setting I like DCC having Cthulhu mythos for Nuetral evil but I also like the gygaxian Daemons and there is no reason to have both. In my setting Devils are lawful persecutors of mankind who buy souls and tempt with worldly power and lie like lawyers. They are more likely to have legal battles than fights with angels. Demons are lawless selfish beings who lie as a matter of course and they only pretend to make pacts and contracts till they have the upper hand. Daemons are more into corruption and sadism. They visit Xor mostly to see what demons are up to.

Demodands - are another evil race kin to demons mostly interested in execution and torment rather than persecuting mortals or quibbling over souls.

Dustdigger - monster are starfish like traps cept on Xor dontt hide under sand, more they disguise selves as floor

Land Lampreys - because you can never have enough lampreys

Myconid - fungi men are so much fun

Quasi Elemental Lightning - these hang about in neural clusters

Thri-kreen - one of those awesome monsters

Vulture, giant -  thrive on Xor but only snack on terrain if desperate

Zygom - can grow in diseased or weakened Xor flesh

BX - AC9 and Cyclopedia versions
A few variations of monsters have always puzzled me in dnd. Bees, ants for a start. Yetis are white apes with ice powers. Devil swine make my top ten monsters and kinda a afterthought in 2nd ed. I like how the BX creature catalogue AC9 lists monsters in sections like animals, magic, humanoids, etc. Has a good undead section too. Some of these in a 2nd ed Mystara monster folio too.Drakes are interesting. Some monsters have slightly silly abstract names while i prefer descriptive names like winged ape to Tabi.

Oyster Giant - also good for clams because every pool might have tentacles or clams. Aquatic and land versions

Golem - Amber, Bone, Bronze, Rock, Silver all fun - never got why these not in adnd - bone and amber main type in Xor and as mentioned before Flesh

Gatormen - pretty horrible beastman type with 7HD - similar elephant beastman too - i just use my Abhuman class but id not considered these beastmen before. 4HD turtlemen too. Evil wizard

Jellyfish, giant - I have aquatic and floating varieties

Beetles - Tiger bugs not in Adnd, im tempted to make them beserkers

Gargantua - titan carrion crawlrs, gargoyles and trolls are pretty awesome (sadly I dont have a Oriental Adventures anymore which has mega apes, lizards and bugs with 50 odd HD)

Golem - Obsidian and mud here too

Gremlins are interesting and I like their luck powers otherwise goblin like, I pefer to make them 6 inches tall and sneak into adventurers stuff to sabotage them. Adnd Jermalaine are hella more creepy but I would make them a sub type.

Lizards - include some extra types not in Adnd

NEXT
making basic encounter tables for terrain and dungeons
Posted by Konsumterra at Thursday, April 06, 2017