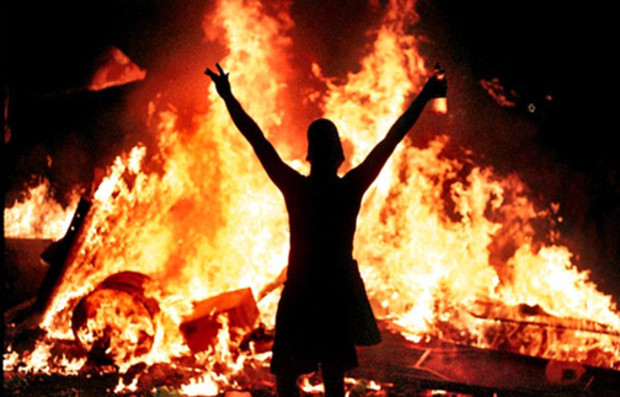 Poleboy:
What is good in life?

After discussion about how horrible your murder hobo must be in this age of murder hobo eat murder hobo i have decided to make the ultimate murder hobo setting in my current campaign. So will have Blood Sand Beach township described next post here.

It is a new age of dungeon exploration and exploitation.
Kill the monsters and leave nothing of value.
Kill em rob em and forget em

Murder Hobos only prejudice if how much more one corpse can make profit over another. A prisoner might make a salable slave if you can be bothered. A corpse can make bait, or a terrifying leather outfit or artwork or scary deterrent. Teeth can make jewelry or even dentures and bones can be ground and used as fertilizer like what happened to the millions of Napoleanic war dead.

Murder Hobos are not just a big naughty and greedy. They will kill and enslave everything living then sell the corpses and collect every valuable shred of loot. Even the not very valuable doors, old bones, tables, chars, shreds of cloth will go to waste. Modern Murder Hobos with bring workers to glean every scrap. Some with bring rending vats and turn corpse fat into tallow and sell as devotional candles or use as fuel to burn down a goblin fort (ancient Chinese did this last one to thousands of people at a time). A rotten corpse thrown in a well can cause all kinds of problems for the locals. A murder hobo doesn't need a mission or a cause or a story. They just need to know there are creatures they can rob and muder for profit and preferably not be called wanted criminals in civilization. While Murder Hobos might even thrive in a prison the life style could limit their money making.

Once a Murder Hobo has sated their basic lusts and desires and have some left over money then it is time to invest. A private prison is a good investment because you can use it for storing ransoming captives, receiving bribes and running other vice operations like drugs and prostitutes. Plus inmates can be turned into sweatshop workers and can help strip dungeons and glean every fibre of hair, every tooth and every brick.

Slumb lords are a common advanced career. An easy way to start is make a list of every haunted house, squatters shack and unwanted demon murder house and buy them at low low prices. Then clear them out and rent them or sell them to new more profitable tenants. A tavern is good buy. Possibly invest in a trade boat so you use it to loot and enslave backward islands far from the law or smuggle drugs or set up a slave plantation.

Also remember cannibalism is only with your own species. It's totally ok to spit roast a kobold. I do recommend if your party isn't made up of evil degenerates to not start eating dead party members an hour inside the dungeon. I find using the excuse "we might get trapped or lost and need food" needs a bit more time and desperation to be effective than one hour in the dungeon.

Sometimes you might get a mission but the only details to worry about is where the loot is. I recommend when rescuing a princess not to eat her until dad hands over the loot. A charmed doppelganger or illusionary disguised orc works just as well as a real princess but best to run away to your gruberhole (robbers cave) quickly with those old tricks.

Now to compete with the Empire's open cut dungeon mine military engineers, the Barron is having work crews use Bloodsand as a processing facility where murder hobos send dead monsters, bricks and dungeon junk for processing by the wagon load.

In the Barony murder hobos often start out as scavengers and gleaners looking for items not looted by a more advanced party. The next step is to go prospecting perhaps in the wilds looking for a new dungeon or join a shanty town near a megadungeon full of Murder Hobos, bandits, killers and scum. Finally with some experience elite murder hobos with a entourage of their own can take over their own dungeons and build their own tiny fortified camps with rending vats and prison cages on wagons.

In the Empire life is a bit less horrible and more wholesome. Most Murder Hobos start as penal dungeon scouts and are forced in by soldiers. While they explore and evaluate the dungeon the Royal Dungeoneering camp sets up a tiny fort and locates all the dungeon entries and air holes and seals them. Then they can pump in smoke and drive out monsters into archers or waggon mounted crossbows or gun arrays or spike filled pits. With a sufficient crew the Engineers will get workers ot open cut mine the dungeon. It can be risky but the Empire provides healing at least and job prospects.

When these murder hobos earn their legitimate freedom the Governor of the Empire colonies might grant them a licence or letter of marque to explore dungeons. Freelance Murder Hobos in the Empire can work fine but best off avoiding civilization. Escapee convict scouts who cross the border to the Barony will find the Empire will have sold them to the Barron by the time they reach a tavern. Respectable Murder Hobos in nice clothes who can fake good manners might get offered officers commissions in the Royal Dungeon Engineers. A great reward might be a gifted commision and territory but mostly you pay for the privelage. You might even have to outfit and train your own troops. The Empire demands first purchas rights of uncommon magic which is a drag. If they the party fake respectability in public they will go far. What happens in the dungeon stays in the dungeon.

With the Barony and the Empire both expanding and building settlements dungeons are useful as brick mines at least. Both sides want magic items. Both sides want Murder Hobos kept busy on the frontier and not too long in civilization.


Poleboy:
Why be a murder hobo?

Murder Hobo:
Stories are for weaklings
Don't think about being a murder hobo
Just let  your greed and hatred flow
and let it happen


Poleboy:
What is the secret of living a long life?

Murder Hobo:
Shut up and get in that hole boy!
Posted by Konsumterra at Friday, November 04, 2016