Masks of the Gods by alighnment: 1 The Sea Gods 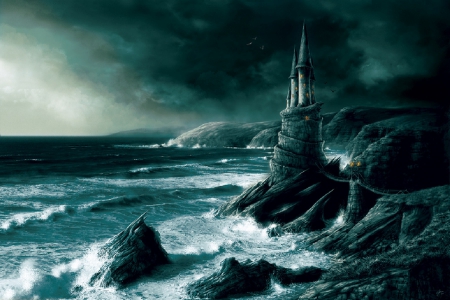 So as I have my new alignment rules Im finally keen to make my pantheon for my campaign. Basically gods will be grouped in elemental pantheons with a god for the most popular alignments. Ive made them all a bit grim even the nice ones.

Ive mish mashed some mythical gods i like and several more posts on this for sky, solar and dark gods. Its a bit less rigid than previous pantheonsl I have done.

Possibly it is what god gets your soul when you die. No reason not to respect other gods even opsed alignments. Other situations gods cults will fight and fued. This could be where cultures clash or represent a division in a comunity. Old cult vs new cult possible with two gods. Gods might marry to overcome comunity splitting.

So a town might have one or more popular alignments, the more people the more alignments. A metropolis with all alignments but several will dominate the civilization. You might have a city with several gods in a family as husband and wife,  Several elemental groups could be applied or a triad of different elements.

Sea God Religions
Many sea and water gods may take forms of aquatic animals especially serpents and fish. Gods happily change their gender or have aspects of themselves with different genders. Even their married partners or lovers might be versions of themselves. Their arms and armour have aquatic motifs. They are all connected by the elemental plane of water. Sea gods are passionate and mercurial, the can be attractive of nightmarish from one moment to the next. Often they move

Seagrim The Ocean Father - Lawful
A scarred and battered long haired bearded old man often with a missing eye or hook hand
Wears ancient barnacle encrusted mariner armour wields trident
He is often accompanied by hydra, sea dragons, sea horses, sharks, whales, fish men
Keeper of secrets, fate and laws, lord of the drowned, father and fighter of monsters, patron of sailors
Souls live in his underwater hall of the dead to feast anf fight and be sent on missions as undead

Seagrims cult are popular world wide as the fearsome sea lord who kills at a whim. Popular with sailors, marine troops, pirates and lords who depend on the sea. Temples are dark and fearsome with collections of weapons and armour. Seagrim may release the dead or father monsters to guard treasures. Many sea forts bare his name and shrines. Many kings use his name when invading or expanding. The cult often act as judges and administrators in some kingdoms. Secret specialty lodges for trades such as for fighters, hunters, assassins and sailors meet to share his secret teachings.

Tamirra the cup bearer - Balanced
A beautiful virgin maid with long flowing hair
Carries a holy cup of silver, but sometimes bottles or vases or scales, wears a crown
Accompanied by nymphs, fish and aquatic birds like herons, ibis, pelican, flamingo, ducks
Goddess of healing waters, peace, purity, love and trade, popular with slaves and poor
Souls serve in the celestial city of the gods providing holy water to the gods

Tamirra maidens live in secure fortified temples with divination and blessings dispensed to common folk. They make the most holy water and sell it the most freely. Virgins usually specialize in healing and divination and blessings. Mature women might manage or guard temples, work for a sect specializing in carnal love or perform act of charity among the poor. They use their influence to effect kingdom politics.

Gizzida the snake lord - Chaotic
A bejewelled bearded old man, often in bearded horned snake form or beautiful youth
Robed in human form and caries a staff or a apple or staff with coiled snakes
Often accompanied by snakes, fruit trees or vines, favours horned asps and dragons
God of wisdom, prophecy, healing, life, orchards, fruit trees, fructifying waters of the underworld
Many souls return as snakes or trees others serve in the underworld tending sacret fruit of the gods

Gizzida is often an important god in community, aiding agriculture, providing scholars, healers and ancient lore to rich and poor. He is popular in underworld cavers and among monsters. Snakes and gardens and sacred trees feature in cult practices and temple design. While he is altruistic he is also vindictive and may side with ancient non humans or reptile folk over his human children if their pacts are more ancient.

Muroa the sea ogress - EvilA obese bloated witch woman who morphs into horrible chimera creatures
Queenly clothes or dark robes with crown and staff or rod or mace, she drags chained slaves
Accompanied by ogre sons or monster children or on a amorphous living horror throne
Goddess of the deep dark depths, mother of mutants, monsters and malady
The souls she traps in her nets and bakets are hidden in her underwater lodge house

Muroa is a monstrous hoarder of treasure and slaves and her temples reflect this. Worshipers give her gifts so she will spare them ans sometime entreat her to recover a specific treasure or prisoner. Most temples have flooded areas filled with monster guardians so nobody can rob the goddess. She is also wise and can be entreated for lost and forbidden lore. She has far reaching schemes to nab nice things mortals don't deserve. She also steals babies, kidnaps selfish people who are inhospitable or bad gift givers. Some of the more common worshipers are fishermen and live in fear if this goddess but she does aggressively protect what is hers.

Aquaregia queen of the sweet waters - Nuetral
A beautiful woman with long flowing hair and shimmering scaled skin often as a mermaid
Often as a mermaid queen with trident, mirror, pearl, jewelery, treasure chest
Accompanied by fish, shellfish, octopi and squids wait upon her and plants act as her clothing
Goddess of sweet waters, called on for rain and water, irigation, wells, aquatic vegetation and coral
Souls often reborn as aquatic animals or water elementals or short lived clouds

Cult temples include fountains, cisterns, canals, wells and dams or flowing water. Often will be on islands in lakes or have moats or water wheels.  Often incorporate natural water features or coastline, or places of great beauty. By improving access to water the community is often dependent on the church. In deserts cult is very popular for irrigation and they know how to build oasis in the desert. Those who defile or pollute water especially sacred waters are hated.

Straala the bounty of the waters - Good
A beautiful maiden with luxurious hair with sea creatures in it like shellfish or starfish
Naked or a mermaid, bird woman ,sea lion or animal hybrid, possibly with jewelry, crown and trident
Accompanied by sea creatures especially sea mammals like dolphins, seals, narwhals, whales, otters
Sea creature goddess, the bounty of the sea, lady of life and fecundity, amorous mother of monsters
Souls often reborn as sea creatures or monster guardians or nyphs or niads protecting a shore line

Cult temples often on shorelines near fishing fleets at sea or in swamps or rivers or lakes and possibly underground water. She helps keep the waters well stocked with life and helps fisher folk who maintain fishing codes. Some vessels have shrines to her to help catch fish. Temples often have a monster guardian. Not really into violence and will feed the poor but will defend breeding grounds and swamps from being drained.

Sin the Lord of the Moon - Lawful Good
A jeweled bearded mature man might appear as a bull or Minotaur or as the crescent moon
Wears turban, hood, mask or horned crown, usually on throne or with stelae of laws or astronomy
Accompanied by family and servants, possibly with winged moon bull, shedus or minotaurs
Lord of trade, travel, and law and navigation he is the sailor in the stars who guides us
Souls work forever in the celestial bureaucracy in the city of the gods

Cult temples are observatory towers or ziggaruts or fields of stelae. Many contain tablets of laws including weights and measures and other laws. Temples can also be market places in the open or on ships. Priests are excellent navigators, judges, bankers, doctors, lawyers, scribes, civil administrators and other educated occupations. They run schools, granaries, taxation and many regulatory and economic services for the state. Sin sails the moon like a boat in the sky.

Tiamat the Dragon Mother - Lawful Evil
Mostly apears as a she dragon or hydra but can seem as a elderly sea hag
May have a iron crown and wearing slime covered or scaled dragon hide robes and a mace
Accompanied by monster offspring like dragons, scorpion men, demons and devils
Primarch of hell, mother of all evil, godess of greed, revenge, abuse of cosmic order
Tiamat cult souls return as monsters or guard her mountain horde in hell

Tiamat temples come in many grand designs but large ziggaruts and coastal or island complexes are her favorite. In some places the cult act in secret to subvert a community or kingdom. They like to include doors and rooms for large monsters. Monster guardians or sacrificial or fighting pits all possible. Monster breeding is a specialty and many temples are in dungeons. Treasure is more important than bloodshed. Slavery is more profitable than evil.

Enki waterside temples are usually whitewashed and occupied by fish hat wearing clergy running temples, working in libraries, healing public or as scribes. Some investigate spiritual threats like ghosts and demons. They are usually highly respected and fight for freedom and life. Priest like their god drink themselves into ecstatic stupors with breweries, wine cellars and vomitariums. Bath houses are common features and involved in rituals. Enki cultists will break rules to win and will use subterfuge and murder to win if justified.

The Kraken is a kin of the gods who has betrayed them and joined the demons of the abyss, commanding aquatic universes of monsters. Kraken cults are often secret, the public ones practice human sacrifice to keep away attention of their god. Towering ziggaruts and weird towers often over water so victims can be dropped in. Caverns with water or wells make possible holy sites. People give to the Kraken to appease him and keep them away. Sometimes monsters are called to carry away sacrifices. Fishing villages often worship the Kraken but sacrifices are often supressed by law. Monastic orders who care for the mad have been operated by cults also but the usualy hide the Kraken shrines from public.
Posted by Konsumterra at Friday, November 11, 2016