Talons of the Night 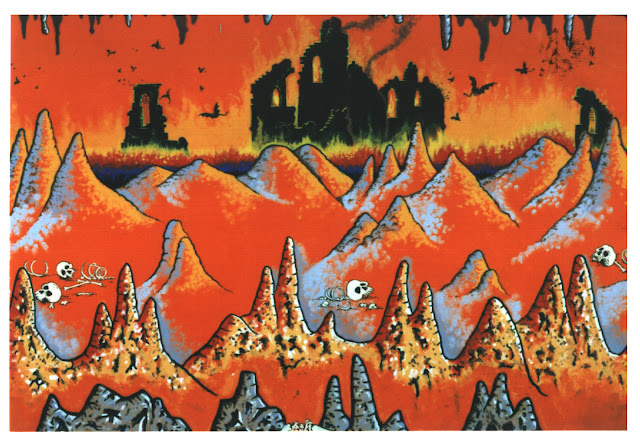 Above: Stage I painted for a horror sex theatre restaurant I worked at for 7 years.

More play from 80s adventure Talons of the Night.

I mentioned to Jenell the module writer I was playing it and she replied "I’ve been told that my M-level adventure stands head and shoulders above the other M class adventures. For what it’s worth, I only had a one-paragraph description to work from, a title and cover prototype with an indecipherable image on it that has nothing to do with the adventure. I’d never played games that high level before, so I tied to come up with challenges that weren’t purely combating and magic."
So my players broke lots of the search of the wilderness with their flying castle full of goons and found a titan skull and they had a chat with her spirit only to have the nightwing attack with a load of mummies. Radon the cleric Borons wife and no1 follower destroyed the mummies and the nightwing was driven away to another plane again. and managed to gain elf and treant and lemur people to battle the spiders and even kept prisoners to reform. While minions busy party attacked the dimensional spiders (like phase spiders but bigger and 7th lv magic users). Then the sneaky Nightwing (20th level darkness horror immune to most spells) appeared from the ethereal plane as it does attacking whenever players weakened. But they used a wish to plane lock the spiders temple so they couldn't escape. The rightwing flew away before sneaking to the ethereal plane and escaping.

So they found the ruins got some more snippets of lore and dropped down the 2 mile shaft to fight the world body of Nightspider and of course that Nightwing came back and a bunch of dimensional spiders appeared. Sourberry the elf used chains lightning to attack the weaker spiders while Lanos and Boron got into melee and Borons wife Radon the cleric hung back to help. The part now going into fights buffed by lots of spells which is frightening. As they repeated their use of wish to lock the plane and this time the rightwing finally got killed and Sourbertry was pleased by look on the monsters face when the plane sealed. Players getting used to 2 or 3 save or die rolls per fight. Possibly the most annoying monster party ever faced.

Party found entry to the dimension of thorn and rested and levelled up.
As teens we would power through these in a long day and night sleepover dnd night but takes a few sessions now. Once again impressed with the resistance of the module to change and Dm not getting all the elements. Everything fell into place well and the use of boardgame and the various lore dumps that can be accessed multiple points in the story work well.

Boron now 20th Lv got an offer to visit the gods on the celestial mountain. Party also considers when they go to the peace conference they will not use disguises but will arrive in the castle and demand the northern continent is hands-off for the southern empires.

Big fun. This campaign lasted way longer than I ever hoped. Discussing what will be next and even the possibility of playing modded immortal rules as first tier deities.
Posted by Konsumterra at Monday, December 06, 2021