BABYLON BRP: Temple in the Stars 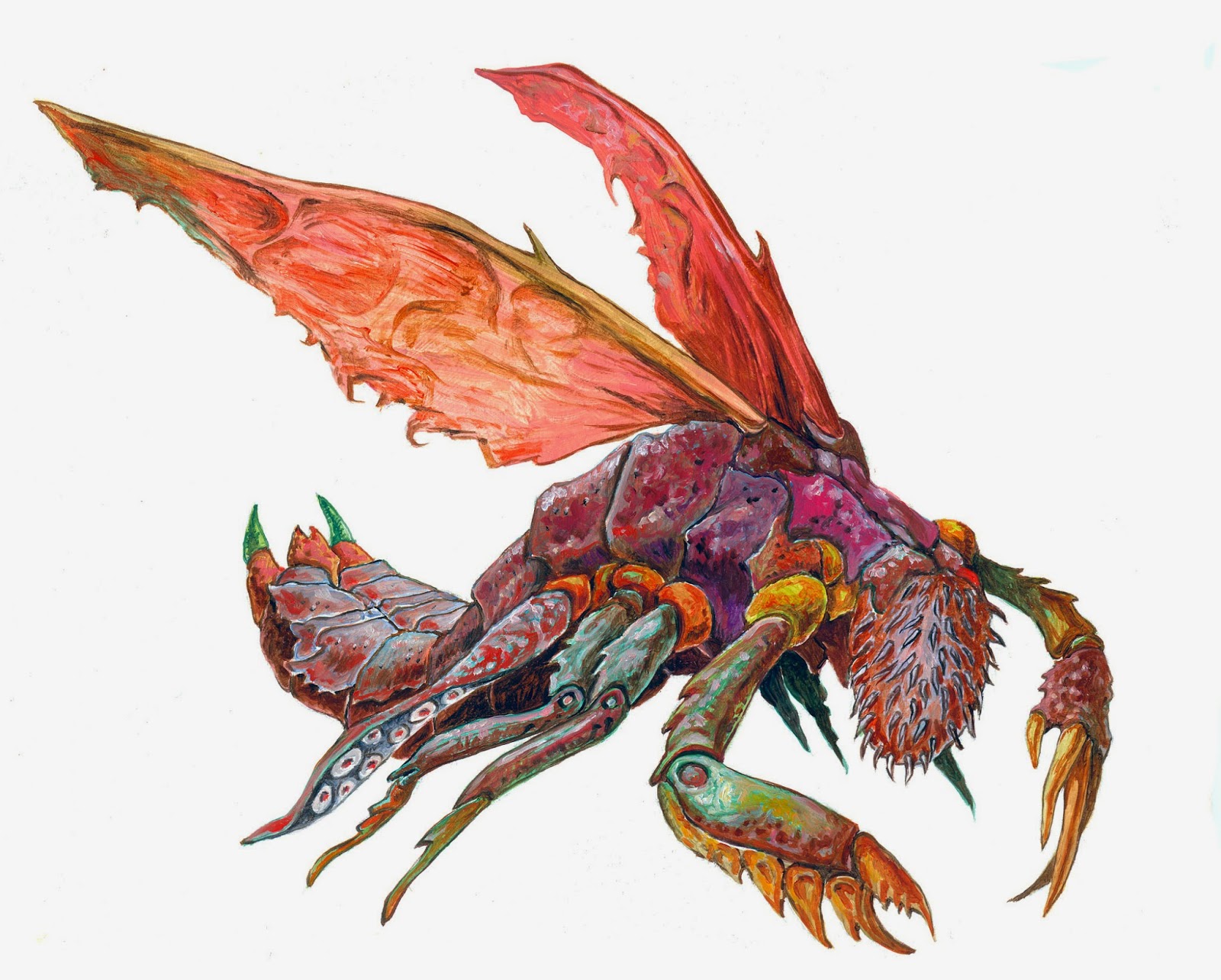 Pek son off Targ came running across the desert to join them. He had hunted them for months and tracked them from last known location. Under the Arab nomad temple was a dark stairwell. After a short distance there was a grey wall that seemed to be not solid. Sobek sent a dove through and it came back saying it was quiet and unwilling to go again as it felt tired. Heroes marched in but Sobek and her bird passed out and did not go through the grey veil. The rest came to a copper lined complex with triangle shaped corridors into a room where they could see a ledge and a strange door. The door had a triangular jeweled grid next to it and a elongated hexagonal door. The upper part of the door had a series of circles and the lower one a point with varied lengths of lines radiating from it. Pek messed with door control and saw a corridor with two doorways. In the room was a pile off foodstuff, water and bedrolls. Everything was lit perfectly with no shadows. They all felt magically drained and decided to wait and recover in hopes Sobek could catch up.

While resting heard something slithering sounds on upper seldge. Ariana climbed Toth and Pek to see what was on 20 foot ledge and saw a door with stairs going down. Continued resting but wary.

After 24 hours Sobek came though portal unconscious. Took 2 hours to wake up feeling weary. Now united  and most happy they could escape so they went onwards to inspect the complex. Pek was deemed very clever so was assigned the role of door opener. Really it was mostly luck but nobody really knew.

So down the copper hall though the door to a great hall with a doorway opposite. Above the door was a row of semi opaque crystal panels. Sobek went to look at up close using her friends as ladders and tried to see what was on the other side. Something creepy, perhaps mummies. The room had a stone altar and a chest of priest robes, silver coins a sacrificial dagger and a medallion. Pek saw a man hiding behind altar. He stood up holding a grey metalic lump from which a chilling cloud of gas came forth. The others all fled the gas but Ariana was injured by frost bite but killed the man. Took the metal lump but could not tell how to use or which way was up.

Passed through next door into a t-junction. They chose left and saw three doors and a distant open area with strange lights. Opened first door and saw a faceless sphynx in a black octagonal chamber. Some recognised it as a temple of Nyarlenthotep. Sobek was an initiate already and had been to his celestial throne. Toth had the spell to become a initiate but never had cast it. Ariana went in and looked at the sphynx and fell feint. She had unwittingly had a spell placed in her mind and and her spirit met the dark god and accepted his offer of power. Others rushed to Ariana's side to help her up from her dizzy spell.

All left the shrine and entered the next room. This was a horror show the likes none had seen. Manticores were behind crystal bars, growling and swearing in Arabic. Three benches in the middle of the room had worse horrors. One had glass vessels and tubes of bubbling fluids, some contained manticore fetuses in various stages of growth. The centre table had a frozen in mid air, a exploded manticore, its pulsing gurgling organs suspended in some manner. They watched the revolting scene before gazing at the final bench where a manticore was being modified to have reptilian leathery wings and a scorpion tail. As they smashed the lab and killed everything they found the last manticore had freshly implanted organs and rows or spines inside it's tail for some reason. After hacking and smashing all they went to the next room.

One wall was black biological pulsing mass with three large biological engines attatched, each with a gaping orifice. Pek poked to with his axe and the oriface closed. The machine began to swell and the wall gurgled and throbbed. A fleshy balloon as big as two men began to be birthed from the hurt machine. Ariana stabbed it to see if it would burst. All were covered in slime with the blast and a huge spider monster remained. Sobek turned away before she saw anything. Her sanity was dwindling. She had become a drunk of late but now she had developed blindness as supernatural danger came near and always grasping her weapons, even with her lovers.

The others battled the horror spider, hacking off it's legs and eventually slitting open it's egg filled abdomen. It had massive venom dripping claws, web shooting spinnerets and spells but of course was killed.  All backed off and shut the door. The weirdly lit open area had four shallow hexagonal pits with cylinders of light from floor to ceiling. each had different glowing symbols in the light. Toth found they could manipulate the signs. Pek discovered maps of the heavenly globes including Earth. Sobek found anatomical diagrams of the manticore surgery explaining new manticores could fly and fire  envenomed bolts. Others found other incomprehensible symbols and strange images none could understand. But some saw hints of biology and navigation and astrology lore.

Someone heard shuffling around the corner and all leaped out to see a priest. As the men hacked the stunned priest into hunks they saw strange coloured blood and organs under his loose sloppy skin. Insides looked more fungal with strange wings and lobster claws on multiptle limbs inside the skin sack. Definatley not human. Pek opened a door into a new room with humanoids behind the crystal walls and the princess of Ur they came to rescue in the first Place. She was in shock. Others worked on de frosting human captives from frozen cells including men from other lands and times in the past. Toth befriended a man from the time of the pyramids. Several Gutians grunted savagley. Ariana met a man from old Knossos. Several were more savage than gutians, wearing only furs with elongated jaws and stooped appearances that none could speak to. The princess revived and told them she had seen a duplicate of herself leave with priests days ago.

Toth waited by the door and watched the hall and saw several shifty priests hiding. One saw him and fired a lightning bolt. Pek and some others ran past hall dodging lightning. Pek used time to go round the complex and sneak up on them. He splattered ones head and the others charged. The remaining one got Pek trapped with a web gun and the others ran up and killed the last one. Horrible non human creatures in human skins again.

The last room was a long hall with pallets holding more of strange weapons the alien men used. Took the weapons and someone accidentally activated a holographic display of a ape man at the end of the hall. Got idea it was a target range. All moved to the entry chamber to return to Earth. Saw a last creature without skin, a horrid exposed brain, fungus lobster insect thing they killed before.

Finally rested for a day then returned through the gate. Sobek passed out and her pet terrorbird jumped to her side. Kull had been looking after the chariot donkeys and captured camels while others away (on Yuggoth?). They crossed the desert directly to Ur losing the strange savages and Gutians on the way. Ur gate keepers surprised as they had already celebrated return of the princess and rewarded the nomads who rescued her with several talents of silver. They were taken to the court where the fake princess outstanded everyone by shedding her skin and flying out the window in her true form as one og\f the other worldly horrors.

The king had charioteers hunt and kill the escaping nomad cultists and the heroes were given the fortune in silver and offered the eternal friendship of Ur. They were escorted back to Babylon and spent several months at rest. Sobek spent her spare time with her shaman having her troubled mind healed. the others forfilled their cult obligations and and trained.
Posted by Konsumterra at Friday, February 06, 2015