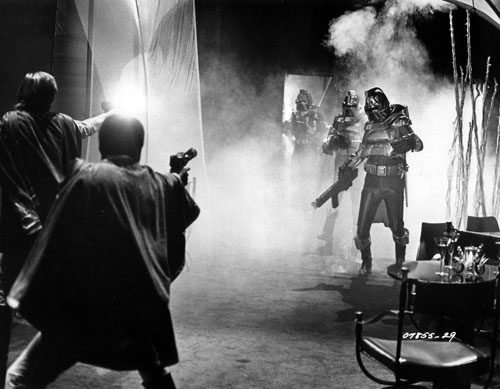 The heroes flew with Amelia the Goose hybrid woman in her alcho-diesel high tech balloon. Landing in the Barony of Horn they saw the awesome pool of vehicles including the Barron's e-car. They met the Barron with their letters from King Beaver and he sent them to find what was kidnapping his people. Cyborgs were suspect but other menaces do stalk the land. So the heroes got driven by catalytic conversion powered Cadillac to the near buy fort and the walked the last few kilometers.

Fishtank, Amelia, Deathpool and his two Mormon farm lads with muskets were looking for sighns of trouble. A man screamed for help and the party saw a bug drag him off. Charging into ambush they blasted the buggem to chunks of screaming burned termite flesh. More buggems burst out of the ground and start chewing. Amelia wasted lots of smg rounds to feed a person for a year, while Fishtank now in plastic armour hosed down a bug with flamer and hosed the buggem tunnel entrance. Deathpool blasted laser after laser finishing them all. The mormon lads were a bit hurt but ok and even killed a fleeing buggem with bayonets.

At the village Mayor Frump offered them a millitary ID if they recovered missing kids. The arty set off and killed lots of Parn bugs in the burrows and freed the kids. They set them free then went back to kill all the Parn eggs and larvae. The found a brain buggem and his guards and had a savage battle. Deathpool lasered the brain into roast dinner in seconds, while fishtank filled the room with a wall of flame. Amelia fired more bullets and finally exploded a buggem at point blank. Burning axe wielding buggems broke the heroes ranks when deathpool used a anti-insect poison grenade the mayor gave him. Most of the bugs died vomiting yellow foam and screaming. The last few were picked off with fishtanks fire axe and Mormon muskets.

Fishtank scoffed some drugs and skulked around burning and gassing the last few buggems. Then they burned the buggem eggs and blew up the entrances. They got the usual tat the party now feel too good to dig for, but batteries and a functional life ray were good finds. They smuggled the life ray to their airship in fear of Baronial interest. 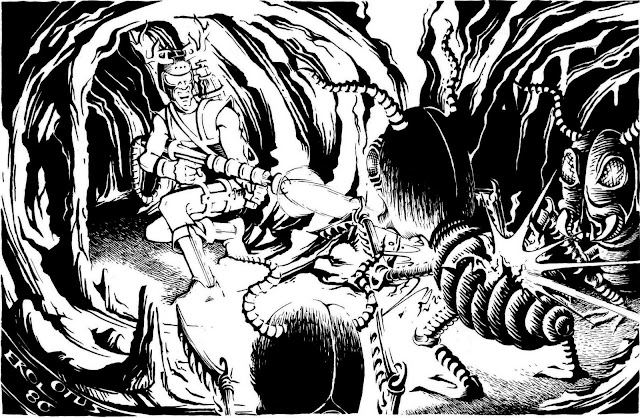 They traded some more stuff  and Deathpool could no longer justify keeping all the new weapons the party Had. He was using his nurostunner whip to great effect. Amelia took a las pistol and the Mormon boys are sharing the shotgun and a unstable chemax grenade.

Next android hunting up the coast and found S.A.M.U.R.A.I. base. Mormon boys backed off and squad of las pistol knights came along. The party entered and spied on androids, Then met a science android and Deathpool tried to be friendly, It threw hyper acid in his face and started punching him. A cloud of lasers killed the android. Scouting the base which they all admired they killed several more androids, captured lots of sonic blasters and death dealing ultra tech power tools. Spotted cryo pods on flooded tower. One soldier killed by hammerhead hybrid. Other one killed by grenade which killed everything in the 200 year old fish tank. Soldiers emptied their lasers and were keen to flee. Two worker androids fled to join 7 warriors outside. The Barrony sent troops in and the Androids are homeless. Most human knights were pretty wounded and the knights cheering the recovery of this base in the Barron's name kinda upset Deathpool. As a chef he really appreciated the autosurgeons, labs and aquariums.

Next the party will attack the cyborg base and get a crack at using an e-car they can fly to the moon.

Now everyone has at least 2 deadly weapons, explosives and a high tech energy weapon. So they feel higher level. Fishtank gave lots of irradiated locations to her cult and some books and a rad sensor so she is most advanced in her rad-cult. Had to roll 20d6 a few times this session from up to 8 laser pistols on parties side (and two muskets for a d6 each). I'm pretty impressed with the parties lethality now. Some of the most advanced tech most bizarre and hard to understand even for those from high tech regions.

Next session defend their base and hunt cyborgs.
Posted by Konsumterra at Tuesday, December 11, 2012