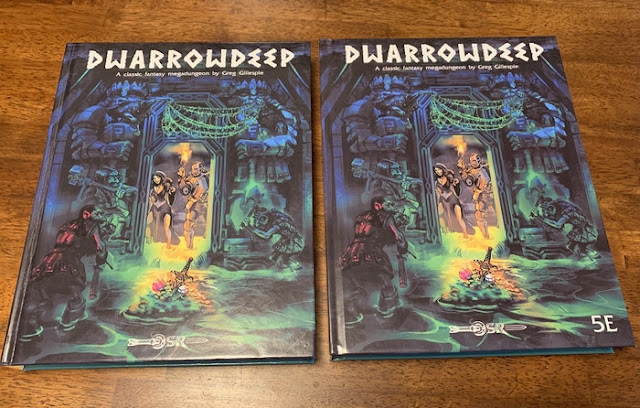 I followed the writer on FB for a few days and regretted it promptly and I understand some ppl might not touch him or his work. I got the first two second-hand and others as KS. I definitely got PDF stuff to go with it and glad I did as it has lotsa chop-up-able geomorphs and maps. I have the OSR version.

So this is the fourth Volume in a series starting with Barrowmaze, The Forbidden Caverns of Archaia then Highfell and now Dwarrow Deep. The first is lots uf tombs and undead. The second is lots of ruins and dungeons. The third has lots of wizard towers on a floating landmass. Now this new one that is a big love letter to the Mines of Moria and is aiming to be the biggest dwarf megadungeon. It probably is but if you can get a look at the MERP supplement of Moria it is pretty awesome and has good cartography.

Firstly all these are in the same world. They are connected by geography and gateways. They overlap in gods popular in the local area lots. Each book has a substantial monster section illustrated. The art is by many excellent artists who deserve to be seen more. I'm Truman (Hellboy and early TSR) and Darlene (mapper of greyhawk). This volume, in particular, has a frieze on the bottom of each page featuring the same adventurers vs various hazards described and it is a great example of this (new dungeoneers book did this but this is way better). It has an illustration section like some of the better TSR modules with an art section to illustrate specific scenes.

Each book includes a local village and preferred gods and a wilderness area. These shared formating and set ups are one great thing about the books. You can also pull out bits of them whenever you need a dungeon, a ruined wizard tower or a barrow. This one will be useful to do underground dwarf highways and cities for years to come. It is the fattest of all four and has very substantial map sections and geomorphs (I could add to some of the Dragonlance ones). Some maps have thin walls a pet dislike of mine but they feel old-school with various types of dungeons like mines, caves, funhouse and underground city. There is a great mix of old-school characters you might expect from the D1-3 series. So its full of classic tropes and old-school hat tips and familiar gods and gags. Its probably not my favourite of the series. Id order 2 1 3 4 as my order of how much I like them. If you love dwarves lots this will excite you more as it has lots of lore and magic and is a rare book to use the abilities of dwarves to detect certain stuff. I think it is while awesome less imaginative than say volumes 2 and 3.

It has lots of good systems to generate encounters and tunnels and giant dwarven mega dungeon corridors. As it has dwarves and clerics featured a wizard will not do as well as other volumes for cool stuff. Yes its a classic and if you have other volumes and love dwarves get it. If your are new to them Id say Barrowmaze is a bit of a slog and undead can be boring after a while. Achaia has lots of classic humanoid tribes and cults and dungeons you can put anywhere. Highfell has lots of weird magic stuff. The consistent format is one of the good things about the series but I still want to see what comes next and hope to see something more fabulous to top the past achievements. To be fair its a big fat book of dwarfy ruins easy to run bits of it on the fly or a campaign. There is a monster manual draft part of the KS we might see more of.