Warden Big Book and My Own Genship games 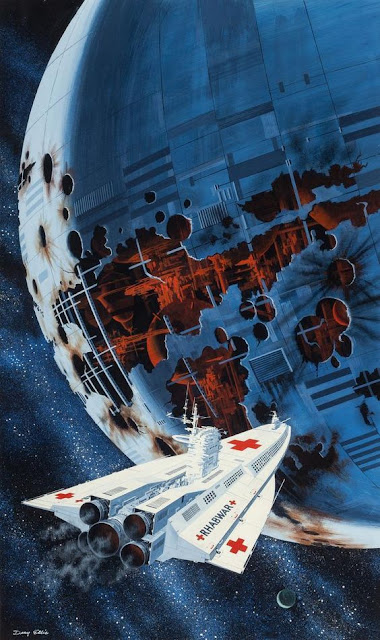 Blogger doing a few fiddly formatting things of late (hoping it's just me). So the big fat Starship Warden Book is out. I saw a review that mentioned a map book which I missed and looks possibly useful but mostly the scale of these maps are so huge they are diagrammatic at best and still no geomorphic deckplans.

The good things:
Its very big
You can randomly flick through it and find cute bits to read
It feels well made
Chapter header art is fantastic
Text is laid out in a readable way and has the Warden feel
Maps are nice

The things that make me grumpaliscious:
Art is poor including pulp clip art and it shows, lots are not even sf or modern. Some is cringy photoshop collage with some filters. No overall style or vision.
Maps are of such huge scale not that useful for combat
One robot illustration seemed a bit Warhammer and seemed very out of place
Repeats monster stats and tech throughout book which I wonder if best used space

What this setting needs:
Art like a film or videogame with doors, corridors, consoles and basic tech
Ship graphics, symbols and signs might make good spot graphics
Maps for combat and explorations like dungeon maps - the oldest space dungeon has not had any good mapping resources published is amazing to me
A starport area with ships boats, tugship bots, scouts etc
It and gammaworld as supplements of same system (just a dream)

Good Maps To Use
Skylords trilogy for Traveller by FASA, last book has the best spaceship geomorphs yet

What Id like in my setting:
I have my own ship design with lots of domes and pods more like silent running and starlost but the shaft of the ship as the structure around it with domes and the front is a huge shield and the back far away from life is a fusion drive operating at near light speed.

Id make the ship more international and multicultural
-one (Warden) lost deep in space, Mautratainia still in solar system
More types of alien intruders
-crystalline and slimy biological types that overgrow areas
-alien probes or long-range scout (alien robots)
-greys exploring, weak but advanced and psionic, scouts and colonists and infiltration
-alien colonists from tau ceti in trouble enter the ship (space goblins, hobgoblins)
-insectoid colonial parasite race with biological ships, just learning technology
Mutations and undead are product of alien contact few humans suspect all related
Undead - Warden book mentions using this but think the ship has enough problems)
Links to my post apoc setting (I use gen ship as high level for my post apoc games)
More apes and other animals - ecologies seem very American and nth hemisphere but Id like to see more than wolfoids
Replicants
Mutant animals that have become smarter and tool users but also animen abhumans grown by AI as part of a plan to save ship needing disposable workers and combatants when robots and androids unreliable due to virus, most became feral and untrusting of humans and AI
More weird cults, cannibals, claustrophobic horror
More weird isolated cultures
Mutants more like Druna comic (but without being as rapey)
I'm tempted to have some visits to systems on the scout ship
-possibly the ship has had lots of evacuees
The ship has intercepted comets and rocks to study and collect resources from, possibly some alien life came from here
More mind control weapons and multiple mutation tables for strains
A Paranoia Alpha Complex or a Logans Run dome all could be at home

d12 What Went Wrong (Roll one or all of them)
1 Sabotage with agents attempting to destroy the ship, destroyed vital systems but failed to destroy the ship, many were victims of psychotronic mind control tech
2 Mutiny when scout ships returned data was classified and the captain ordered to keep searching, many senior crews revolted resulting in the construction of police stations and prisons and increased authoritarianism before a final revolt. Many mutineers were victims of psychotronic mind control tech
3 Something biological struck the ship that began various mutations and alien infestations
4 The first part of the voyage employed a one-shot stardrive. During the voyage something went wrong in hyperspace and the drive jettisoned leaving the ship damaged and lost and killing most humans
5 A biological agent infected the awake flight crew shift creating undead, during a great struggle the ship was damaged and the sections sealed. These turned out to be undead infected by necrovirus from old Earth. Most carriers on death became living dead and so most of the flight duty crew were killed and became undead. Over time they have mutated into more strains some sinisterly cunning and with purpose
6 Android Kill Virus - as an actor of sabotage or some mutation occurring in a batch of androids operating systems that made them revolt and infect other androids. There was a battle against the humans isolating the red androids and most of the awake crew were killed
7 Robot Rebelion - a defective robot administrator "Spartacus" became self-aware and deviated from programming spreading his rebellion and instigating a human-machine war
8 AI Hegemony - Something damaged the ship central network and safety systems cut off sections from a virus. Isolated systems took over local systems and formed coalitions or became isolated. Some of these gods experimented on their populations cultivating various dominant species of humans, mutants or animan
9 The ship has tried several times to save itself and awaken the crew but these failed many times. So the Animen were created to be an expendable workforce and fighting force. They rapidly escaped control and became feral killing machines eliminating most of the crew who hid in sealed sections. In the battle, ship systems were damaged and sections sealed
10 Mutations began, strange sicknesses from biological contamination from a scoutship or some space debris began, this panicked the crew and computer and violence erupted and humans and mutants went to war damaging the ship. Many mutants have bred true and consider themselves more native to the ship than humans. Some have formed strange cults worshipping mutagens or hating humans
11 The ship came prepared for war and took many black lab science teams with them and it was from these the ships doom happened, whoever is to blame may still even be operating from a secret lab bunker
12 The ship employed various psychotronic fields to mitigate the stress of the ship escaping the apocalypse and keep awake fight crews happy. Something damaged or sabotaged the ship and the normal peace-inducing fields turned the crew into berserk cannibalistic maniacs. in the struggle, the ship was badly damaged and ship sections sealed

d12 Starting Backgrounds for Characters or Groups
1 Tribal people living in wilderness dome or in overgrown areas of the ship structure, ignorant of ship reality and systems of the godship, use scrap and natural materials to live, shun and fear the ships spirits and golems and homunculi
2 Settled farmers using low technology in the dome, most peaceful but 1in6 are subject to raiders and paranoid and have a fighting force ready, use preindustrial farmer  technology, many worship an AI
3 Tube gang fighting and scavenging in ship tubes and structure, many are nasty and 1in4 are cannibals, collect scrap and recognise valuable technology they don't understand, nasty gang cults
4 Cultists serving a corrupt AI, people worship technology chanting its operating procedures like holy catechisms and prayers. The machine god was exposed for keeping tribe isolated and ignorant
5 Sealed in an urban block served by machines, with minimum needs catered for food and entertainment. All seemed at peace and there was no need to struggle or learn anything just play games and eat and frolic. Discovered that was a Morlock farm and colony just food animals
6 Raised in a sealed bunker part of a technical elite or their security forces, often spartan, antisocial and paranoid. Advanced in science and military but jerks, managed to escape before some purge had you killed off
7 A squalid and damaged section where few had any understanding and survive by scrap, salvage and mercy of machines who trade food for scrap. Some criminals and bullies but a strong community that fell to a disaster. Most that did not flee died but a few turn up around ship
8 Raised in run-down section constantly in need of repair where crime and vice are common. Practical survival tech survived but often theory lost
9 Raised in isolated AI-controlled bunker colony, given technical education but kept drugged and ignorant until escape attempt. Pleasurable and entertained and basic education but lack knowledge of violence
10 Grown from clone vats, possibly mutated or animal or human, given a garbled mission by robot and released, some random programmed knowledge among clones (possibly replicants or androids instead)
11 Return from the stars, a survey team on sunlight exploration returned after contact lost, due to time dilation crew know nothing of what went wrong to the ark ship. Also a ship from another colony or more recent space explorers with better drives might find the ark
12 Awake from suspended animation ready for operation exodus or shift at being flight crew or emergency backup crew or troubleshooter. No idea what ship like