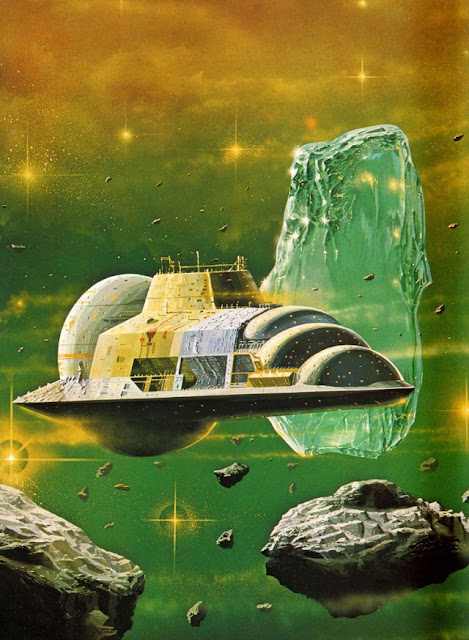 Been watching the Canadian TV series Starlost from 1973 and of course, I love Non-Stop by Bryan Aldiss. Morbis Gravis with less rape would be nice. I often like using a metamorphosis alpha as a place for high-level play in my game world and planet psychon games. Unlike the survivors on the earth, these various space megastructures around the earth these settings lack good factions. So I'm fixing that... I'm hanging for my 670page Starship Warden KS book.

There is stuff here based on my own setting - this is a variant for that for when adventurers get from earth to space to a generation ship, a heavenly kingdom of loot. Perhaps an earth AI can gate them to the spaceark via a gate or an improved drive.

Also considering The languages in the Expanse I considered such a ship would have multiple languages. Languages can make communications harder and violence more likely in some cases and will slow the reclamation of the arc. A language is not just talking funny, each includes cultural information and lore that will help you survive. If you have a skill in a language you could guess where another user came from by their dialect and language style. Some use the command as a religious language for programmers only

Command
System language used by original crew and ships (English/Spanish/Chinese?), spoken by computers, machines, ancient crew, sleepers, undead, ship signs. Other ancient dialects can be accessed by ship systems once you know how. Some people learned this entirely from ship speaking systems and displays.

Trade
The more guttural language used by tube merchants across the ship. Even one part speaker in a village can initiate trade. Also able to crudely read ship signs but functions are often distorted or mythical - distorted word sounds based on ancient are common

Tribal
There are hundreds of these possibilities but a speaker of one can quickly understand basics like taboos, borders, aggression or peace. Tribals live as hunters in certain domes and habitats dominated by wild nature and are almost always at war with mutants or rival tribes. Some call this language scav after the scavengers roaming the ship for parts

Jacker
Slang from old ship infrastructure crew who often were treated as second class and even had barracks deep inside ship systems instead of paradise-like hab cities. Gangs have individual slang terms. The development of this language started before the ship left Earth

Domer
Languages are from stable isolated communities in urban or ag domes. Many of these were ancient languages or mutated versions of Command. Some local AI will operate in local domer speech and may be instrumental in its development. Command speech terms about technology often used even when local domers based on a different ancient tongue. Domer speech is often limited with each specific isolated community but some command phrases might be understood and used to start to build a common understanding

Machine
The AI, Consoles, Androids, Cyborgs and many other synthetics speak in high-speed squarks and crackles or more directly via machine code broadcast by coms systems or data storage devices. Some human techies can understand crudely but usually require a Voxbox to actually communicate and understand the nuances of machine etiquette. Some animals and even insect minds have learned to use machine languages but often in a limited way to get food or call help from a vetbot. A human trying speech or flashing lights or writing machine code can be very slow to communicate and might be a holy skill for programmer priests