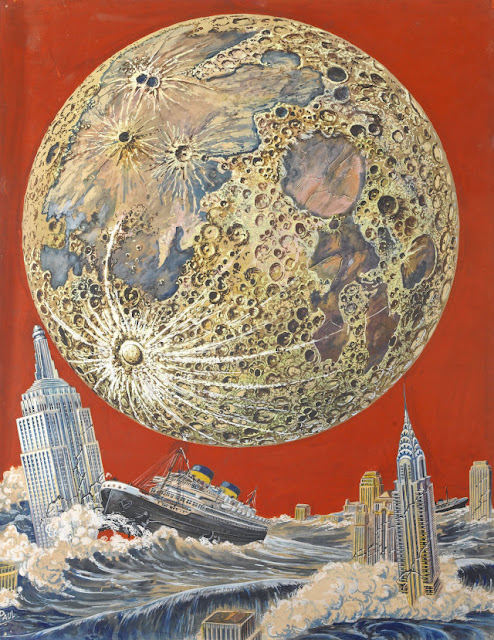 Have had an editor go through the text with me and have remastered the first 11 threefolds I did for my Patreon so now I need a cover sheet for legal publishing and hopefully put up a dollar each and a bundle for 10 with numbers 0-10 and extra maps. So we just got 7 days of extra lockdown lockdown and I don't have to feel bad for typing for days.

Back to writing a batch on a project and have a layout to do this month.
I Will look at working on more of my threefolds out there but may still redo the number so they run in order and I can release the finished ones earlier. So Yay a good editor I can work with in-person who knows my work at the moment. After I get the first bundle up will aim at having a crack at finishing my rulebook and then to a version of Planet Psychon and its broken hill supplement.

Was hoping to move but might have missed my window on that with covid property price hikes here in my "safe" town (less lockdowns than big east coast cities).

Knock has been a great success and has been good to be included.

Have scanner and pile of art for Broken Hill book and a bunch more content for that ready. I'm hoping to redo some of my older books with extra content and improved editing for some sales points.

One artist, I need to resume dealing with as I had frozen some projects while I caught up on some more keystone projects.

My homebrew I have a working version with summarised info and tables and basic character gen and simplified spell descriptions as a digest book and a version with designers notes, examples, more choices and content for science fantasy and more spells. There are plenty of retro-clones and this started as BX+1985 1st ed skilled and a few other bits. The homebrew main features are my alignment/oath systems, reskinable species as a class, options to change class in play (all to eliminate some problems of species=class), attention to followers and other stuff. It is pretty compatible with stat blocks for other games. As a fantasy game, it supports more commonplace shapeshifting and spirits and potential planar interaction. While games expand into domain play higher levels this is designed to reach 20th level and then face constant risk of apotheosis where divine beings anoint you with divinity and carry you away to some timeless otherworld.

My Cavegame is almost over and I could add to and revise that book. 3 games to go tops and hoping will try another setting out. Ideally my bronze age stuff so I can edit 3folds for Egyptian and Babylonian stuff or the Fantasy setting I have not used for a while. The cave and bronze and the standard version of my world are all same settings so running the eras in succession with reincarnation might work.

My backup post apoc game has been fun and useful as it gives me more ideas for stuff It needs. Car rules are sadly needed I might mod from my previous work for other games. It has taken using my level system to get players at 6th level starting to feel like beginning gamma world characters now they are waving lasers around and have robots. The 3folds I did featuring common ruins was pretty good and I would like to expand. I wanted to do a series of Planet Psychon 3folds each with land to explore and a citadel and a complex map of some kind. The complexes required some art which I can now get around to collaborating on.

Patreon & Publishing
Should be doing a paid Patreon post this month. The bigger adventures I have been writing to learn to write adventures were a good experience but they all blew out time-wise into 3x as long in R&D phase as I would like. Im back off from these bigger adventures. I might want to play with a more linear mid 80s style with sequences of mini-dungeons awash with narrative railroads. Id like to research old dungeon tropes and reinvent them and make my fantasy world post-colonial in some way that's not by making it a utopia better than the real world.

So below is my stupid dream publication list from when I started in 2012. A large number of my tables are compiled in a book of some kind on my downloads now. My fiddling around with a core book has been to at least have the consistency I can edit stuff to fit and file off some stuff repeated.

Dungeon Zones
1 Red Brick Dungeon - kobold built brick dungeon complexes are the most common type. This is mostly done and workable I would probably revise it some more but basically an infinite classic dungeon
2 Gothic Ruin - haunted mist-shrouded ruins of castles, churches & graveyards. A did a version of this to play with some layouts and I would have written plenty more and have planned more. Full of graveyards, ruined castles and moody weather
3 Goblin Mine - goblins have riddled the land with mines now homes of humanoids & monsters - have a workable version with humanoid lore and strange underground stuff I would revise it a bit. Id probably try to include lots of nun human races for play
4 Strange Manor - haunted mansions and sprawling estates of time haunted decay. I could possibly assemble lots of this stuff and it might inspire me to work out what it needs. Funhouse dungeons with weird magic traps and dimensional spaces like inside paintings
5 Castle Grim - sprawling titanic ruin built by giants and trolls, only degenerate giant kin remain and it borders of other various worlds such as elemental planes and faerielands. Full of powerful roaming monsters and some humans and demihumans surviving in rubbles
6 Desert Temple - great haunted ancient desert temple complex buried beneath cursed sands,  writing an A-Z for this for months. Plenty I would add but includes bronze age campaign stuff
7 Lost Jungle City - sprawling ancient ruins in thick jungles full of dinosaurs and cultists. Some fragments on this under my monster Island setting stuff. Have had players establish a colony here. Lots of lost world jungle weirdness stuff
8 Eldritch Age - prehuman alien ruins of things from the void and their vassal monster kings. This one has mutated quite a bit but includes prehuman occult ruins and paradoxical things from incongruent times and strange artefacts. I've done bits of this for exploring eldritch alien cities. Needs more time travel, portals, dimensional spaces, reality warps
9 Glacial Cavern - prehistoric ice caverns where great beasts and monsters of the past survive, probably rolled into my stoneage setting stuff
10 Sunken CIty - great ruins of flooded civilisation in a terrible reef full of wrecks and haunted sargassums. Did a sea book recently could double it given time
11 Elderwood - faerieland forest where creatures live among the roots, inside trunks and high branches. I did a faerie book I could expand
12 Underland Chasms - mighty cavern and tunnel system with lost and fallen forgotten kingdoms. Bits have been published and I will reuse at some point but no immediate plans as on cooling off. Unless it fits my campaign play needs