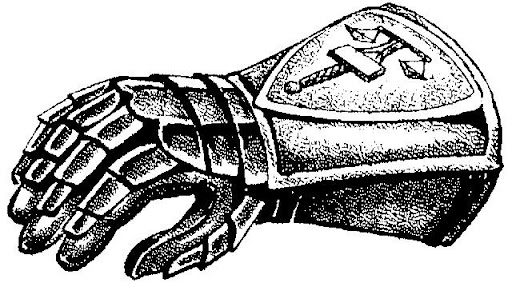 Gloves in the dungeon are not to be trifled with.

Underworld Beasts 02 - Phantom Gloves and Gauntlets
These are gloves often seeming to be left on a dungeon able or in a chest. Often rooms with them will have weapons or dangerous tools or heavy objects near by. When intruders break pre set conditions the gloves usually float into the air and attack. These are conjured or called by summoners and illusionists or created as automatons by artificers . The are not truly alive just magical constructs. They never check morale and are immune to fear magic. Agents and beings of Law use them especially.

Gloves mostly in pairs but single or collections of a dozen might dwell together or operate as a collective unit. Gloves either following orders or awaiting a trigger to set them off on a task or mission.

They will use weapons if instructed or punch or grapple or a group might use all of the above in sync. They can perform any action a human could without a body, head or legs by just floating. The basic gloves are useful laborers and can perform so kobolds hate them. Some use to produce mechanical force for traps, automatic doors, pumps, mills, and other wonders. Specialist wizards have made versions more to their taste (rumours of a necromancer or demonic versions of spell).

They are not imaginative or innovative but have serviceable memories. They find it difficult to differentiate humanoids except by colour of uniforms. They can't tell gold from dirt. They do like pointing, demonstrations, and generalizations like that thing or that person.

The are terrible at many complex tasks if left alone too long and will sit and await orders if left unattended. Sometimes when the magician who made them dies and they have no preset orders they become wild and might change alignment or develop individuality or curiosity. Many seek to serve minions of Law or the Cosmic Balance.

The gauntlets are a more recent development with more armour than agility and more it points instead of manual dexterity. They are stronger and dumber. Dwarves and gnomes have built them and martial wizards. Gauntlets only fight and do no craft or labour but will push or lift or dig.

Things they can do
Punch - basic attack if have no weapon
Grapple - will try to swarm and grab foe from behind, grab limbs, cover eyes, steal stuff
Weapon Attack - will use as if skilled any blade, rock, frying pan, iron spike whatever
Can pick up a rock and throw in a round d3 damage (d3+1 if Gauntlet)
Carry and drop things from above like bag of caltrops or nets or rocks or boiling water or oil
One could throw a hand missile then fetch it or go in close to punch or grab
Two can work to load and use a gun or bow and a third carry ammo
Two can use greatswords and polearms and other two handed melee weapon
Many together could carry a net or bench or big rock and drop it
Many together could carry a battering ram, branch, beam or boulder and ram people with it
Carry a tray, fan, glass or use a stylus (not for gauntlets)

hmmm a d100 weird dungeon gloves might be nice
Posted by Konsumterra at Monday, December 14, 2015