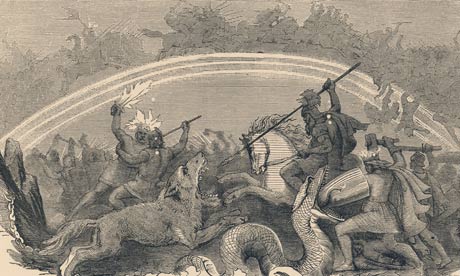 Just a catch up on my campaigns. I have not done full game posts much last two terms. Some readers only read them. Others complained had no game content. So was about same. Im gaming about half as much and working more mostly.

Vikings2 922AD
Almost finished this game one more session after 4 months. Band stated in hiding from inter clan war in Estonia/Rus borderlands. They explored local area and visited Novgorod. Rescued some christian missionaries from russian pagans then took the monks as slaves as parents had done before. Explored hole in ground formed by long decayed dragon and met goblins from underworld and a sorcerer. Went to find fortunes in Kiev and fought werewolves and a witch raised by Baba Yaga. Took charming companions from the witch's endless cliff cottage.

One viking had learned of werewolf secrets from Kiev. Later he accidently mixed with evil werewolves and they taught him a soul eating ritual. Learned of werewolf types, tribes and ways. He tried to use ritual on newly buried dead and failed mostly. Party did meet ghouls in many cities this way of several strains. Moved to Byzantium after a looting spree through Bulgaria. Met many sorcerers, got better armour and became skilled at mingling with christians. A few party members made Odin crucifixion necklaces that saved them lots of trouble. Over that long time two brothers slipped away. One visited a sea hag near greece and visited her claiming he was son of a night hag and kin. Many in party learning and mixing bits of cult magic and sorcery and spirit magic. One of the hag sons returned from absence with trollish size strength and ugly face. He spent a whole winder grooming self and shaving horns and tusks till he looked more passable.

Bought a longboat and got crew in Byzantium from vikings there. Eventually headed through seas near greece and sacked a monastery to sell books and slaves. Sold them in Libya then went to Rome where they spent months. Most in party new latin, greek, arabic. Went to Marce and learned Frankish and went up river to attack monastery marked by parents on map. Had to hit bridge by night killing all troops then went on to monastery where they found a Necronomicon, a immortal brotherhood with a resurrection lab and malformed things in pits. Killed cult except leader and took their ignorant follower monks to sell in Spain.

Moved on around Spain and along coast to attack a rugged cliff coast monastery. Also earmarked by parents as to be destroyed. There found cultist monks all knew mindblast spell and almost all party went mad before they drove off leader and killed most of them Cultists made bad slaves but book collections and trinkets sold well. During battle One viking gnawed off a mans head and another watched excitedly. Rest of party who found them aghast. Another went blind. The noble leader of the band was struck dumb and followed all instructions literally which poorer vikings liked.

Through Britain to the currently norwegian ruled Danelaw viking state above Saxon England. They swapped cargo load of books for land with saxon church and got some celtic serfs. In Danelaw the Norwegian king was served by party kin Stonedales so they were welcomed. King offered them more land if they swore fealty to him and the refused then left. Noble viking bought several ships and had her serfs shipped to Arabs in spain then taker her silver to Norway. Party left british islands and stopped at Viking city on tip of Ireland before raiding third monastary. There monks took many blows while praying and vikings cut them down. Questioned several and wondered for a moment if the monks were innocent or even of a allied order to their parents. But under the Celtic monastery there was a roman level then a hyperborean one. Whilst they hacked up a great bronze idol the Trollborn son saw what others could not, a horrible tentacle=eye god had oozed up well and was coming from behind. Heroes charged and defeated it and it fell on them crushing half the band. They killed all the surviving monks set burning pitch across the buildings and sailed away to Iceland.

Greeted by kin and local temples as heroes the were feasted and given best halls to stay in. One viking followed her fathers trail to a cave where his gate to saturn was hidden. Trollborn and his brother used Necromicon to call spirit of father who explained he was eaten by their night hag mom so that mystery solved. They visited her and the vindictive brother spared mom for his brothers sake and she gave them magic gifts. Others rested. One became a priestess of Njordr. Others got married over the winter.

Fimaly they were ready to sneak to Norweijian clansmen and to court of Norway to see king and have Bloodstar clan outlawed (or at least get a huge payout). Just a quick trip through Saturn.

Posted by Konsumterra at Wednesday, October 07, 2015