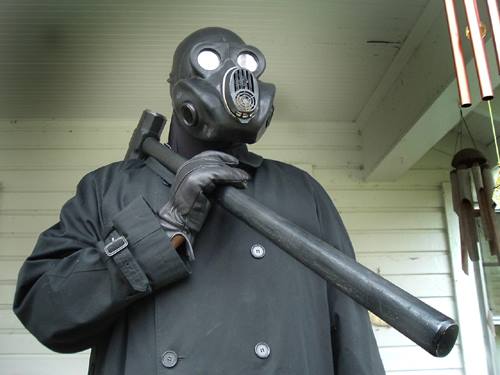 So as I'm running my murder highway and rome games on sunday I will try to touch on what happens briefly. Not as long as my old ones but it is handy to have some records.

Staring
The Sheriff
The Mutie

The boys got to start the third of their tv pilot death race show. The show brought back all the racers and the start zone was pretty quiet with tents set up on a ashen polluted desert wasteland. Sheriff spotted managers discuss the days ahead and he sent his bioengineered dino pet in a stealth suit to spy on them. Overheard talk of surprise stars, sponsors and unwanted unauthorised cops.
The race started with all teams wary of race rather than rivals so mostly a bit of bumping. After a while in worst terrain and warning signs to avoid area everyone saw something disturbing dust racing at them. Bionic sheriff saw something with lots of wheels and robot arms and armour. Eventually they realized it was a russian venus probe that had landed by accident weeks ago and had upgraded self with destroyed vehicles. Team fired machine guns and mutant used his laser. It rammed the mini Citrus Fresh damaging it badly and moved through the team. It breaked and came after the racers and the Sheriff and the Mutie kept firing. The sheriff saw sign of a bonus cash prize in a farm building ruin and fired a grenaide to get through the fence, White Knight a lady rival racer followed him. The rear most car got grabbed by the venus probe which began to dismember it. Driver screamed while Mutie decelerated emptying his laser battery. The probe destroyed a car and the racer escaped with a helicopter extraction team. The probe grabbed the ailing Citrus Fresh and the teen celeb clone racer jumped onto the roof of the Mutie's car. As Citrus Fresh was shredded and the probe hurled wreckage at a race helicopter. The sherrif outwitted a mine field in front of case with his fishing rod while White knight returned to the race and machine gunned the probe. The probe slowed and lost power as the Mutie rammed it from behind destroying it.

Worst foe they ever faced. At pit stop they were glad for a rest. Sheriff opened the bonus cash case with his bomb disposal armour and sensors to find he had won a banana. That meant a bomb and a cash case left on circuit. After rest of racers did repairs and had a bombshell girls bikini carwash. Cars reloaded and fixed a bit. Citrus Fresh's driver was back with new car after others pep talked him into returning after near death. The Mutie had picked up a race team girl who was religious and impressionable. The radio DJ team played the greatest hits from the 50s 60s 70s 80s and 90s. So they started the race early.

Next race section was off road roo tracks and farm ruins. Sheriff instigated race for the second possible cash case but mutie beat him again. A corrupt cop enemy of team with a .50cal sniper riflle damaged several cars and sheriff lost time killing him while White Knights driver inspected body. When almost at pit stop two drone cars with 20mm cannon turrets came after them. Those hit were a mess and Citrus Fresh was destroyed again. Another race stalwart was destroyed and only four cars made it into safety zone. Even that was due to sheriff damaging a cannon turret.


Staring
The Eutruscan Seer of Minerva
Her sister a horse trainer
The Alexandrian androgynous sorcerer
The Nubian slave gladiator who fights like a Thracian
The Spartan-Cretan gladiator teacher who wears a bull helm
The ex slave turned loyal family scribe
The adventurers had a gladiator brawl and had gone to see with their saving to try and recover their master held hostage by Sicilian Pirates. Managed to get pirate locations with bribery and met pirates to see if the could get price down as they only had half cash. Pirates unimpressed but offer to take cash to not sell him to his enemies. The bull horned gladiator gave a teary speech about the master being really poor. So the pirate asked them to kill a wizard to make up the cash, So our heroes went to last remaining ruin of bronze age towers from when wizards ruled the island.

The wizard admitted them and they saw his swine headed slaves he boasted of creating. The seeress was disturbed but dreamed of creating owl men she could copulate with. The wizard offered to help kill the pirates for just 20 000 coins and wanted three of the party to transcribe their spells for him. All party agreed so after dinner the wizard helped them make a illusion on a pirates head making it seem like the wizard had been killed by the party. He also made bags of river stones seem like gems and poisoned some fine wine with hemlock.

Heroes visited pirates with fake head and loot and paid of the pirates, gave them poison wine and left. Back in wizards tower they examined their patron with blotchy discoloured flesh, twitches and tilted head as if he had had a stroke. Returned to pirates who's leaders were either poisoned or shitting phlegm from hemlock. Began to ambush and kill the boat guards and drove them into their cave. Heroes with skillful missile fire and gladiators killed 21 pirates before the remaining ones called for a deal. Forty pirates left and party found coins and fabric and maps and a carved gem and a strange potion. Collected many petty weapons and a few of adventurers picked up shields to keep. Got back to wizard to transcribe spells for wizard while gladiators got rubbed up in oil to practice their wrestling skills.

Some consider studying under the wizard as getting into sects of sorcery in big city involves lots of toadying. So master was starting to talk and fit for voyage to Rome.