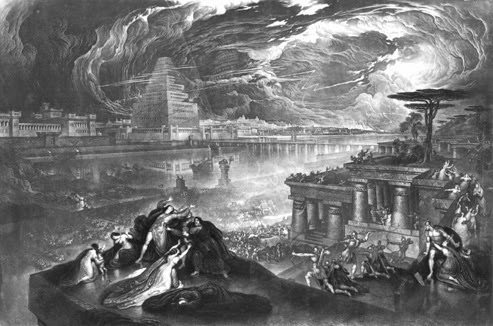 Party had a year or prep. Ariana went to spend time with Griffons. Kull spent time in Dragon Pits of Marduk, Pek persued the secrets of his god Ninurta and gained a spirit, Sobek had become a shaman, not by raw power than with expert ability in rituals and a bit of luck, Toth spent time speaking to the dead and Iltani had learned more sorcery.

So time to face the coalition. Egypt (With Lybian mercenaries). Tyre-Sidon (with a horde of Phoenicians, philistines and sea people). Hittite led group with Mycenaean pirates and Mitani Charots. The Heroes came with King of Babylon and the armies camped and awaited the right moment. Saw the enemy try to hire local Canaanites and some Arab nomads to fight so Ariana and Sobek managed to get then on side. Iltani turned a boy into a giant dove and linked him to king so he could observe the battle fro on high. She cast spell on the elite troops to be more deadly and formed several smoke clouds she formed into horrors. Pek turned into a eagle and spied on area and saw cultists on the sea shore summoning something. Ariana sent her loyal Mycenaean  pirates to kill the cultists. Toth snuck into camps of enemies leaving a Phoenician knife in a Egyptian general and poisoning the Phoenicians water. Pek as a bird would waylay baggage carts and one crashed once revealing a black faceless sphinx he thought familiar.

Finally the battle was afoot and hoards of enemy irregulars, Pek led a huge force of archers in the trees on edge of battlefield which did a lot of damage. Canaanites suffered the most. Sobek riding her terrorbird led lions she had trapped in pits and now controlled. Kull rode a dragon which swept towards a enemy position shielded by trees. Toth and Iltani rode chariots in close. Iltani drove her smokey horror phantoms but enemy leaders had prepared them for this trick. Each main enemy faction had a group of chanting magicians. As heroes army of Babylon marched forward  both sides ran low on irregular auxiliaries and the enemy lost chariots to the dragon. When the great factions clashed and Pek and Ariana flew with spells over the battlefield they saw they were going to win.

In the distance a horrid sound was heard from the sea.

The Hittite wizard had been killed but his familiars carried on the summoning, a weaker form of the unnameable one than desired had been called.

The Sea peoples wizards sacrificed their wild dancing girls and began screaming and their eyes bled. Their spell was diminished when Arianas prate crew killed the cultists on the sea shore a few miles away. A mere dream of a god was called.

Elder gods began to appear. Foul tentacled face god surrounded by yellow mist swept on his callers, devouring them. The dead wizards familiars were worshiping it the unnameable one. Nyarlathotep appeared from among the Egyptians growing from among the Egyptian heralds. The lord of chaos screeched and waved his face tendril at the sky. Cthulhu's cult had been stopped but a phantom dream sending came, increasing the pressure on the minds of men.

The soldiers snapped, screaming in all directions, tho battle was now a panicked mob screaming madly. Sobek snapped, she remembered long ago Nyarlathotep promised her power and now she was here to wait on him in person. As she rode her bird towards the crawling chaos, Toth snatched her from his chariot and fled the battlefield. Pek called on Ninurta and the god gave him a gigantic form like the god. Pek-Ninurta strode towards the crawling chaos with his holy mace. Kull never to be outdone called Marduk who merged him with his dragon. Ariana blasted Hastur with lightning and flew into the highest branches of trees. Iltani called Ishtar and was granted more energy to user her powers of sorcery to bear. She blasted Hastur with bolts of smoke from her smoke phantoms. Dragon breath singed Hasturs screaming face.

Cthulhus dream form faded and Nyalotep had shifted form and fired himself into interstellar space.

Hastur was blasted by spells and dragons before exploding into a foul yellow fog.

Only a few heroes walked from battle and that cursed place.

Pek was gone with his god.
Kull the dragon went to live in Marduk's dragon spawning pits as a stud.
Ariana, Toth and Iltani lived for decades un-aged before departing the world of mortals.
Thats right the noble richborn kids hogged the elixir of life they stole.
Ariana went to live in mountains with centaurs, satyrs and griffins.
Toth and his snake goddess wife went to live in a great cavern near the land of the dead
Iltani became a sorceress advising the Empire
Sobek was kept in a tower but some say she escaped and is now a witch
Fluffy the terrorbird has no known location

If I run Babylon again will include more crazy magic and non humans and more fantasy
Will post photos tomorrow
Posted by Konsumterra at Sunday, May 03, 2015