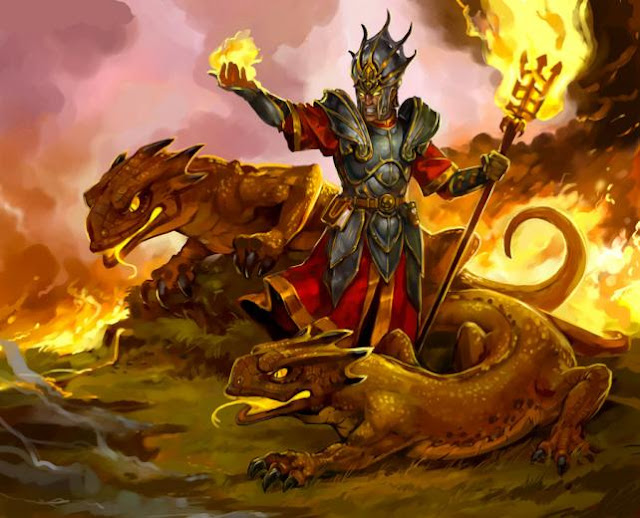 So people complain about alignment and pesky gods allied with inhuman morality impose their conflicts on mortals. Everyone knows the gods are jerks. But it's better than what was before alignment. What?

I mentioned older weirder alignment systems and how I might use this in my game. Alignment is all about drawing lines in the sand to pick a fight. I can totally see two chaotic evil bugbear clans that serve elemental cults but one is fire and one is earth so they both hate each other even more than those zero level mooks building a village. This direction in my game might go to strange places yet.

So the current arrangement of law vs chaos and good vs evil is the new improved alignment mark 2. Before that elementals swarmed among the elemental storm, in the beginning, coalescing from the explosion of law and chaos and light and darkness (this mythos is incompatible with other accounts).

So the first spirits were manifesting into raw matter and energy before the world was formed. In islands of elemental protomatter these beings lived without need or want. Then the elements began to be aware of the wrongness of the others and began to fight and merge helping to form the world. Early in the world many of the beings worshipped the elements. As gods and other beings became known to creation the elementals and their cults shrunk in influence in favour of the current system.

The elemental heresies are various styles of elemental cults that can fight and squabble over the ultimate nature of reality and why it is unlikely they will ever cooperate again. It is why they lost any power they had and other simple alignments became preeminent.

These could be handy for any quick meeting with elemental cults or initiations.

d12 More Elementalist Schisms
Use to determine conflicts and factions withing elemental cults
1 Lawful - elementals part of matter and energy building blocks of reality
2 Chaos - elementals are the source of all things exploding into reality eternally
3 Balanced - elementals must help harmonise the eternal war of law and chaos
4 Good - elementals serve the life force of the universe and the forces of creation
5 Evil - elementals ruled once and shall again at the coming elemental apocalypse
6 Neutral - most  are about local stuff on their home plane and every day life
7 One element was the first, the rest were by-products and thus derivative
8 Various elements combined to create the material world (d3+1)
9 Hybrid, para and quasi elements are abominations diluting elemental purity
10 Hybrid, para and quasi elements are early steps in creation before the mortal world
11 Restore the multiverse into constituent elements and elemental pre-eminence
12 Elemental nullists break the universe into basic elements before submitting to the void

Note: In my retro-clone homebrew taking oaths lets you get gifts. Obviously, the gifts from this draw on particular elements and rewards should somehow be connected to the theme of the elements.

Elemental alignment spells are pretty predictable but generally, elements help you resist the same element rather than an opposite. Im happy if elemental cults from different places have different ideas on what their element opposite is. All elements have been allied and enemies or had a turn on top over aeons so any bunch is acceptable.

Long ago shaman dealt with elementals as spirits and some specialised in dealing with them. Sorcerors came from bloodlines of those who mated with elemental spirit folk. Much later there was an age where elemental templar cults battled necromancers after a dark age of forbidden magic and darkness where monsters ruled. Remnants of these elemental cults are common in ruins, dungeons, magic items even coins. Long-lived and elemental beings remember more than most people who know nothing of this. Elemental wizardry came later and also had a failed attempt to control the worlds magic. They did leave an impression and their remnant schools make up lots of the world's wizards today.

Such cults can be incomprehensible and rival sects might be hostile if their heresy is different. The elementals encourage lots of strong themes and are easy to improvise. One moment they seem to follow some pattern, the next they are doing something inexplicable commanded by alien elemental overlords.

I do like the eye cult in Greyhawk and the temple of elemental evil as a scam for unappealing demons. The point of these elemental cults is they don't seem as weird or bad as demons but they can be pretty weird and arbitrary pleasing their planar lords from beyond. I want them to be unpredictable when you meet them - are these the crazy fire cult who hate water or the fire cult that fight undead or the one who burn human victims?

Elementals have enough problems with other elements and how to treat them but then alignment forces infiltrated and influenced the planes. Its bad enough that you wander the elemental planes and meet lava people where earth and fire meet but good, evil, law and chaos complicate this more. Most elementals are neutral and many of these tend to go along with the efforts of more committed elementals.

I like Avatar-Airbender show in lots of ways - the elemental continents were big fun and elementalism is easy world-building. Remember other cultures had different elements and some had more or less. Sumerians earth air water was a thing. India added void/spiritual 5th element probably a bit more complex than pithy game systems care about. Wood and metal were elements in China. I like elemental cults squabbling over which was the first element using arguments like early greek materialist philosopher tried.

I considered an elemental war and elemental mutations for core elements posts.