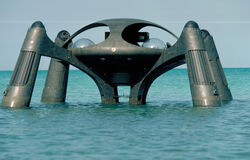 So In my post apoc setting, I have not detailed coasts much. Lots of the south coast is cliffs. Many ancient cities are flooded and the waters are retreating currently. Ships and marine structures often were lost inland carried by tsunamis. This is mostly for stuff to see on the way players can mostly avoid or might get them curious.

Overall it is a good way to get around without getting lost but it is more likely than the wasteland to support hostile life. Sea factions are mostly mysterious to landlubbers and even feared. Some have built artificial platforms to live in at sea or are boat nomads or find isolated islands.