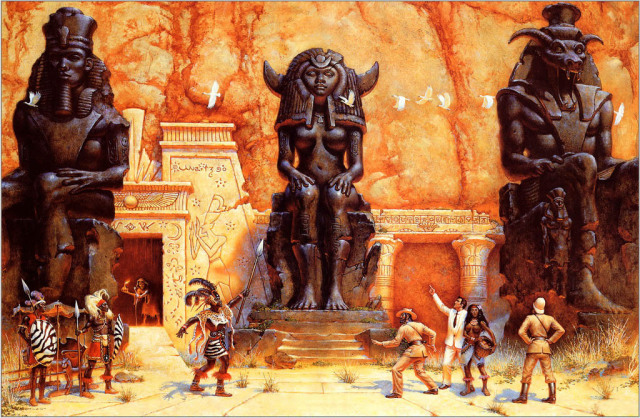 So I'm filling some of the gaps in my TSR collection for reading. I have said a few times later TSR stuff like 2nd ed was wasting more space per page with fonts and page borders, writing in a more long-winded style, and changing the basic method of setting up modules. Have been getting Al-Quadim setting adventure reprints as perfect bound booklets rather than the original booklets and cards in a thin box set. I found it readable and there are some good adventure ideas but the layout is just blocks of columns and meant to be used with maps on cards. In some ways, the maps in different style are props and quite nice but the booklet parts seem like relentless blocks of text. Some spaces and bold headers would have separated sections better. It just seems that era layouts were slapped out fast and steered away from the older styles of adventure layout. I will be able to fit these into a game I'm sure and will write better comments on their content. In some ways, I'm happy to have these in drive-through POD.

X6 Quagmire
An adventure I had seen but never looked at and was a print option so I got it as the more post 84+ stuff I got less of. So this is a sprawling wilderness crawl through a tropical jungle and swamp I could fit into a few campaigns and I think would work while on the way to the Isle of Dread. SO you find a message (and more copies all over the place) to save a sinking city. It's barely a city but getting there and to all locations and exploration uses detailed peninsula maps. There are lots of wilderness events of interest so wilderness is one of the key elements of adventure here. Quagmire the city needing help is a citadel in a giant brick shell one of three. Visiting Quagmire is tough as a few critters have moved into flooded sections. So the citadel shell map is described with variants of design for two other similar shells. One you lead the People of Quagmire and clear out getting the chance to be local cultural heroes. Another submerged citadel offers a nasty merman colony that players infer from maps in the other two. I'm liking the idea of adventures that have reusable functions and reskinning possibilities. Giant shells remind me of Corum's home in Moorcock book. The idea some marine civilisation built them is interesting and can be a basis for a campaign. You could put some similar ones you stock yourself in other locations and lore of the ancient builders. Adding extra ruins and detail to the native people so you might be able to befriend them. Easy to add something like the Tomb of The Lizard King in the area. Speaking of which the POD of Tomb of The Lizard King is pretty nice but the cover a bit dark.

The World Of Greyhawk Fantasy Setting 1980 version POD
This reads like a tour guide of the setting with notes on seasons, calenders, heraldy and in the POD booklet version the maps are split into pages and not so usable. There are some pencil notes from the scan which is amazing. Id like later version to come out and the much later Greyhawk box sets all be released but this is a barebones rather dry book in the setting. I do like it has some naught kingdoms, mention of imprisoned demigods and other trinkets of info. It feels like medieval European nations over huge depopulate wilderness with plenty of frontier for non humans. Possibly not best intro to this setting, the version after this was better, The maps are lovely shame they dot have fullsize POD maps from TSR box sets.

AC11 The Book Of Wondrous Inventions
I don't normally like magical tech but in my old age I have come to tolerate it as an occasional appearance preferring ray guns and robots to steam stuff and airships. I did like the deep gnomes in the UK module when a star falls so I quite liked them with weird tech. Dragonlance had wacky gnome tech. Things in strange ruins or a dungeon so players wonder what it is might be amusing. Anomalous Sub Surface Environment could have lots of this stuff. Some of my settings are weirder than others. I could imaging a magically destroyed gnome city with these items detecting as magic in the ruins might attract adventurers. Basicly this book is not for every setting but perfect for some specific settings of uses. It is partly silly with Jim Holloway interior art adds to the impish spirit of failing adventurers. But it is very well done and does give me ideas on how to use in my games. With artificer in dnd5 this might be of interest for ideas. Has rules and discussion on how each item is made and a system that looks pretty easy to make items. 96 pages and a solid POD product.

AC10 Bestiary of Dragons & Giants
Really it is a book of lairs for basic dD&D. Does have a nice size chart and minimal notes on giants and dragons with a nice bit on hiring giants to make stuff including magic. Dragons hoard wealth to become immortals and has lots on dragon spell lists. Then most of the book is dragon and giant lairs by various writers. There are some fun set ups to change how players interact with dragons which would fit in my setting. The scenarios have snippets of lore and mention of a Dragon Council poor dragons have to attend if summoned. One adventurer has poor dragon who was subdued and sold to an evil wizard. So these are good springboards for ideas. Now I'm thinking I should subdue dragons and ransom them to their kin or the dragon council. Some of these might be slipped into G123 the giant modules. They could even replace sections as they are shorter and to be fair the original is tedious. Some have rule notes like flying combat, there is a cloud castle, some islands, using dragon bits in item crafting, and lots of titbits. This could have been terrible as the lair books are hit and miss