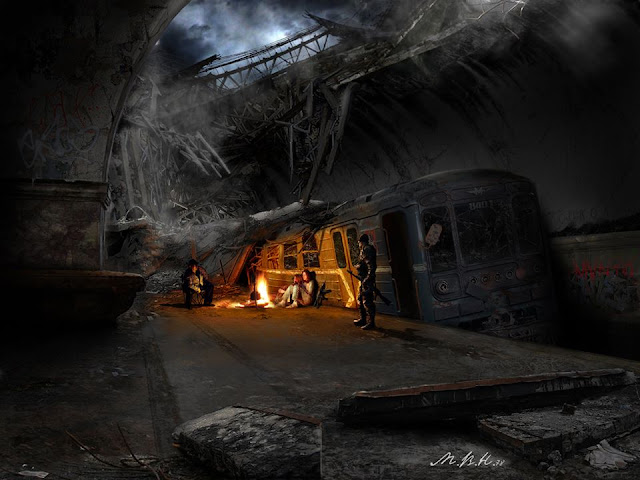 d10
Factions Locations in ruins of Broken Hill
1 Tribal Hunters Camp - where tribal folk visiting the ruins mostly for trade camp here. a d4-1 tribe will be here each with 2d6 members in distinctive dress and ornaments. All unite dealing with non-tribals but won't fight here as it is taboo. Often will be cooking or butchering animals or working on weapon crafting. Camp can use smoke signals to call allies, often many living among settlers
2 Raveground - where ferals put on bushdoof rave parties and camp selling vegetarian food and drugs. Often have wagons or a bus. When several clans meet they spend days having DJ and dance and bong battles. Lots of gang members come to big events and mostly there is no trouble
3 Bandit camp - led by wasteland gang vet, preys on merchants, settlers and adventurers. Camp has concealment and booby traps and gang members experts in woodlands. They do try and keep in favour with commoners who believe bandits are good guys. Some of the front line guys wear crude heavy plate armour which is intimidating
4 Raiders Camp - wasteland tribe with d4 bikes and a d3 buggies and several squads of psycho punk troops. Camp here to raid locals and go plundering ruins. They like fights too. Large tents serve as barracks, mess and medic. Each gang has own name and boss. Sometimes a gang tries to push out a rival mob from the camp
5 Ghost Town - settlement abandoned for a d4 years often with a stray creature or prospector, population all massacred and signs like bones scattered around. Many think it is cursed and avoid it. Often some clue to the last days is found or other visitors who passed through
6 Secured fortified cap populated by well-trained humans in uniforms, came from a bunker they were exiled from and well prepared for life outside. Try to act like common settlers but too clean and disciplined like bunker folk are. Are willing to trade and even relocate if a better location found. Have several advanced weapons and are good with tech.
7 Spartans Camp - fanatic warring tribe here to train in fighting and athletics. They compete in games and allow others to compete with them. If you beat them respectfully they may let you hire them. If you are bad sports or lose they have contempt for you and may become hostile. Guards carry assault rifles and shields and spears and daggers. They are famous for being war-loving jerks and slavers
8 Morlock City - where morlocks dwell in a great street of rubble in buried buildings, basements and a train station. They also keep a bunker where the populace of Eloi (Eldren) believing they are safe in utopia. Other levels include plants and factories where they toil and prison cells for food prisoners and butchering area. They will trade and are expert with steam-age technology of 1900
9 Snaketown - where reptilian abhumans meet to speak of reptilian supremacy and to reconquer the world. They keep humans as cattle to humiliate and abuse. Their numbers are growing and the snake priest Krung camps here with pilgrims awaiting the weekly cult meetings. Krung keeps human slaves to lure victims into the gates of town
10 Canibal Town - where gangs gather to have BBQ and revel in eating humans. Victims are sold off to be butchered for a feast or to make jerky. Skin tents house families and prisoners are kept in wooden boxes or chains. Visitors are welcome but just need 2lb of fresh human flesh to enter
Posted by Konsumterra at Sunday, November 17, 2019