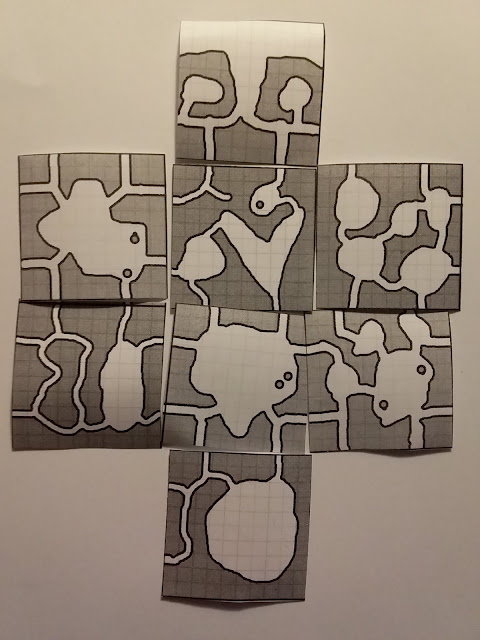 So alone on a friday night waiting to see friend on lateshift.

So rolled up party of 5 for my EMO homebrew and sent from Tinvale near Sour Hill to explore random kobold mines.Im using stuff from recent blogs, a unreleased 3fold and dungeon zine #14 on my patreon currently.

So I don't want to name them till they get to first level.
Solo stuff is always dangerous.

So made these guys:
Elf - average with low vigor so will rely on arrows and spells and spotting stuff
Fighter - average with good agility lots of armour and good with a sword
Cleric - above average agility and will and first aid specialty
Dwarf - strong with good vigor, the party HP tank
Thief - has best stats of all with three +1 bonus stats wow!

Worked well and will try again. Geomorphs about 3cm square so fit in my wallet. Printed 2 sheets to a4. Were done hastily so a few bugs. When i do my sewer ones will be more careful.

Sortie 1
So wandered about mine for a while finding some scraps like a mining helmet before found a shrieking fungus that the party killed. The thief heard kobolds miners coming and party battled 9 kobolds. As they could fit more in a corridoor they had a edge but the party had superior armour. When down to four they fled but didnt get far.

Party continued finding scraps and heard kobolds chilling between shifts. Thief sneaked in and killed one of five and fight broke out. Fighter got scratch and thief got bad cut. But kobolds had chest of gold!

Found some lamps and went through more rooms til a green slime guardian dropped on dwarf. Party burned it off in time but his plate armour ruined with just padding remaining.

Wary of moving on but went anyway came into a bat filled cave. Dwarf didnt note danger and swarmp panicked chomping at everyone wearing party down. Thief fell first, then elf then fighter and cleric. Dwarf drove them off,  stripped party metal armour and weapons and dragged them out unmolested into a abandoned wolf hole. After days hidden thief recovered and others got better except the sickly elf in a coma unable to recover without a healer. After several days two wolves attacked and thief fell and dwarf killed one and drove other off. More days passed and cleric anf fighter recovered. Priest easily accelerated party recovery and they fled back to Tinvale.

Sortie 2
Everyone but thief now in chain as they couldn't replace plate party left in dungeon so overall a loss but 100gp in the kitty. Thief spotted a portcullis trap and deactivated it. Elf spotted piercers and mining tools and party went another way. Thief heard some kobold chatter and investigated and stumbled on a kobold priest and two servants. As they saw him but were stunned he lashed at them stabbing priest and called for help. Party poured in surrounding them. None of them hit and the dwarf got a cut. Kobold priest cast hold person and all failed to resist so elf used her sleep spell and cut their throats. Party recovered and dwarf got some medical aid.

Wandered about and thief found a grenade trap. Took grenaide and found cave with carpentry tools. On investigation a fearsome molebear erupted from the soil expecting a snack size kobold. Cleric healed the dwarf and the elf put a strength cantrip on the fighter. Dwarf and fighter badly hurt mole bear and it tried to flee only being a young one but thief killed it before it could burrow away. Skinned it and stripped it of meat and party pleased even though biggest healing spell used up.

Found a mining cart of rubble with a scythe trap. Wandered about more finding a dead kobold and avoiding green slime. Thief wounded by a flaming oil trap and stable but unconscious so party decided to flee. On way towards exit came across kobolds guarding a medical chest. Both were startled and attacked. Kobolds defeated but fighter survived 3 hits and dwarf badly hurt. Elf was hurt and had to fight unarmed when kobold closed her with her bow and she punched it three times to win. Party took locked chest and ran back to Tinvale unharmed. When Thief recovered he picked the lock to find a kobold healing potion.

Party at a net loss still from losing fortune in armour but healing potion and a grenade always nice. Ended first session.

Sortie 3
Entered a new kobold hole. Avoided a diseased foot spike then a gas trap. Thief tried to get the gas bomb and failed but got away. Found various mining scraps and avoided several green slimes. Found kobolds working and one had a plan of the mines. Thief tried to get them  failed and kobolds all attacked. Everyone wounded o elf cast sleep and party fled.

Sortie 5
Everyone was healed and returned days later determined to hit king kobolds lair with the map. Went deep inside but spotted 3 hungry stirges they easily defeated.  Found 3 guard dogs and defeated with only a few nips.

Finally found the kobold king lair and thief went in. He was talking to his priest and petting two dogs. Got close to king but a dog yapped and thief killed it. Elf shot the priest and the kobold priest blasted the party thief knocking him out and leaving him bleeding. The king threw a net on the party cleric entangling him as dwarf attacked the king. The fighter stopped to help the cleric free himself from the net. The kobold priest threw a fire bomb at the elf taking her out. The fighter ans priest attacked the kobold priest bringing him down as the dwarf and king battled till the kobold king died. While dwarf grabbed the crown, the others helped the dying elf and thief and grabbed a few hundred silver. Party fled back to tinvale still at a loss but with experience.