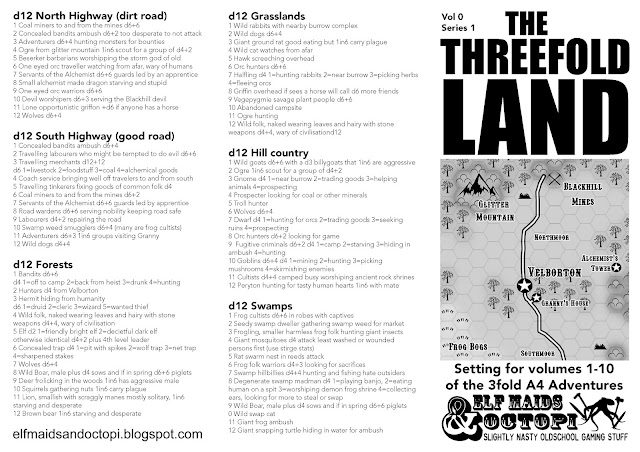 So had a game of my EMO hombrew dnd retro clone rules which was big fun on public holiday with four players using my 3fold flyers on patreon. One had played The Secret of Granny's Hole, Beast of Velborton and partly the Alchemists Tears scenarios. So i used a different intro. I had them all roll up terrible backgrounds which helped.

Dallas played a bard from a noble clan that had been ruined by demonic cults which he several times tried to use as material for poems but audience never got it. At least once he attracted the wrong kind of fans.

Hugh was a friar of the wine god who's clan had been executed for tax evasion. He had worked in church assisting building plans before becoming a wandering rural friar.

Fergus played a thief from barbarian country who after a night sleeping in elder ruins had dreams of the primordial age then fled to live as a urchin in slums and never quite cutting it in a guild.

Tom played a noble bastard who was a black sheepand ran away to be adopted by a guild. He fled them after the beatings from failure and the threat of death if you failed initiation.

All had come to the Threefold land from the rich south to make it rich. They met on a roadside tavern and stuck together till they reached Velborton and were greeted by the rotting corpses hanging on town gallows. Went part the Royal Coach House and to the cheapest pub the Pigs Eye looking for adventure.

They all tried out frog grog and swamp weed and local food. Met local scum and got invited to frog cult rituals. Heard of the ruined halls, the witch filled woods, the alchemist, recent monster troubles, cults, the mine devil and other problems and decided the Southmoor Hall ruin was best. Stayed in the nicer Inn where Dallas avoided getting robbed by a lady adventuress and  almost got conned by her fake treasure map. Fergus went to spy on them through a second story window and decided Dallas was safe. Tom robbed a miner shouting patrons with money he got from stealing warding gems that caused the problems with devils in the mines. Heard several such gems were in town.

In morning went south and spent days searching for ruins and as they found them wild dogs attacked and almost killed party. Dogs fled and the party retreated to heal without harm. Learnt camping by road at night safer than moors. They were also lucky.

Raided the hall and it's hidden frog cult hidden. Thieves proved very handy and several times party taunted frogs to attack with thief ambushes proving deadly. Freed some slaves and found some lost clan relics of a deposed royal line. Priest convinced them not to rob dead. Hid in a secret closet for three days. Realised that you need nappies for unconscious adventurers cooped up for days.

Back at Velborton after rest and training wanted to rob Northmoor Hall ruins. Several had taken oaths and players considered how they could mess with each other. Visited the Alchemist to trade and took up a minor mission they failed and almost TPK. Healed and went to look for Northmoor Hall. Found it and spied on it a while. Ignored several orc warbands and sneaked ip to ruins to systemically kill & arrest evil inhabitants and free prisoners. They cleared the surface and went back to Velborton keen to return.

Two thieves proved pretty deadly and I am pretty happy with my current version of them. Still might change way surprise and initiative works rather than doing it because BX does. Adventures worked fine and good to play them through. Nice to play a DnD clone again which Ive missed.  Sadly no idea when this will happen again. All came together quickly really.

So discussion today over game that the oldschool initiative and surprise rules seem to be about using different dice more than making sense. All the monsters and classes with different surprise or be surprised chances and i was never sure how to play these off against each other - chameleon vs a shadow - which surprise dice to use....possibly hang over from early days when dm just facilitated encounters, door kicking and room looting of purple box days? anyway any alternatives? could i try common sense?

Afterthoughts
-I prefer rolling initiative once per fight for each side as faster
-in BRP use DEX wich is consistant and simple
-RQ strike ranks were painful, as was Champions system
-GDW troops raked from green to veteran or something but more experienced chartacters get to do more faster which makes sense
-im fine with spells and missiles before melee and factoring reach rather than 2H weapons all go slower, but does get a bit fussy
-amazing not more spells abilities to mess with this but it probably has been done
-a simple core mechanic shouldnt need lots of tedious rulings and abilities to fix
Posted by Konsumterra at Monday, June 10, 2019