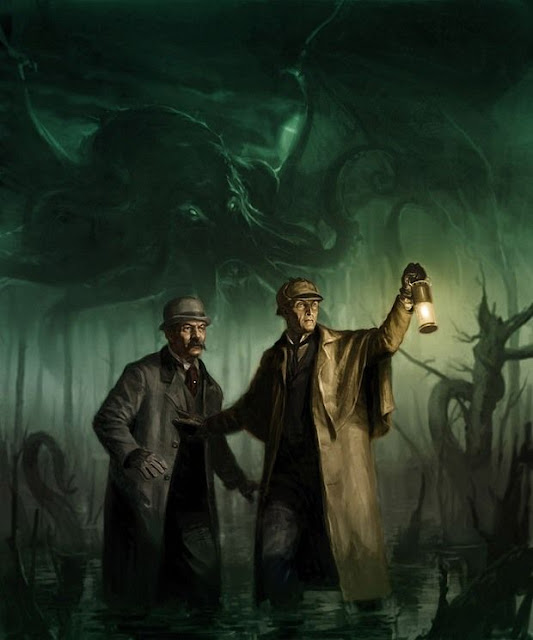 Snappin' her tentacles and shufflin' her hoofs,

The only mythos god that give you milk
Dedicated to recent thing that happened in tonights game.

The next best thing to killing a character,
driving them insane and into the clutches of Shub Niggurath.

So Almost done the New York chapter of the new edition of masks.

Like much of modern Chaosium it looks, good, is crammed pack and pretty high quality. Still the best company making RPG's to me (though dropped the ball a few years back). But it has lots of flaws. Im using fan made companion extra content and have found it helpful for fixing some flaws and expanding on ideas. I keep my second ed copy on hand because it has some great art and is often easier to find stuff and to work out what to focus on. Small print but density is not worst RPG crime but i often need to use glasses which is very rare for me.

I might be complaining a lot here but I do dream of buying more stuff and my wish list has over 20 old and new Chaosium products now, 2nd is a few TSR things I lost and want back. Ive complained about old vs new before so will avoid that trap. I guess trendy rules and possible simpler/less maths helps some ppl.

I never thought it was the best COC scenario. I always thought it Pulpy. Fungi From Yuggoth and Shadows of Yog Sothoth Ive run many times. Spawn of Azathoth I like and one of best case dreamlands adventure in a mythos plot. Normally I use dreamlands my own way not strictly cannon. Dunsanay opium frolics clash with Mythos too much. I always thought Masks was pulpier and the Game over editions became pulpier so i use 2nd Ed because it is meaner. A few good things in 7th ed but lots of stuff I would not bother with. I learned 3 systems in early 80s and used all my slots cos Im a brain damaged grogtard. Also Orient Express is terrible. I threw out most of the content from 1st edition but keep the railroad npc book close always.

Despite all this Im running Masks. Probably more like Lumley style than HPL or Pulp.
I see no problem with using tech available to criminals and in shops to kill real monsters.

Im finding it very over written and hard to find stuff

Half a page on a character you talk to in a bar.
Stats on character who is killed in the scene you meet them
Wish headings of section had NPC name instead of poetic headings
Im tempted to make my own flow chart with built in check list.
Sometimes only one player of 6 in room can read handouts.
They had white paper in ye old days. Not all paper was poor quality or sun damaged.
Sometimes repeats info many times in same scenario, even on same spread.
Miss 8 page scenario chapters in Shadows of Yog Sothoth.
Instead I get 32 pages instead making prep slower.
Tiny dark portraits that often are not helpful in book.
Pages on scenes that don't really help much.
Keep wishing next version fixes things.
Some of the added threads don't really gravitate the main story.
One chapter states local gun laws another does not - a format on counties might be good.
An "Atlas of Cthulhu" with local gun laws, police, health care, customs and stuff in a simple format might be nice.
They killed a villain never realising his significance but I guess they will eventually learn.
Some items with no warning destroy characters.
What if a character was driven mad with the vision mask and implored everyone to try it?
TPK is old hat TPM in COC is real. Total Party Madness.

Lots of loose ends in play so Im happy to have characters just kill some people with tommy guns or pay someone else to murder a bad guy. Happy they throw money at a lawyer get a mook out of death row so they can get on with meat of adventure. After killing cult and burning down HQ saving a mook seems a bit slow paced. A SAN reward might tempt them.

On the plus side some of these problems could be features to some.

I made a NPC live cos I liked her half page bio and thought it a waste to snuff her on first contact. She helped drive events on. I considered making her a love interest but the investigators are mostly damaged war vets and couldn't speak her language or too scruffy.

I realise some people need everything spelled out to give keeper lots of room and flexibility in case things come up but my players still ended up stepping outside the framework so I had to improvise any way or made my own tangents. If no amount of writing can prepare the GM maybe don't try. Encouraging improv and creativity is a dying art in all published big company works.

I was happy that the second New York session due to player absences only one player/character was on both games but the hand outs and me and that player filled them in well and the three previously missing players all said "wish I was there".

The companion adding details on snow in NYC 1925 helped lots to set mood.
I used the extra Mexico prequel which was great.
-beat crap out of fake drunk god
-all captured by well armed criminals with rifle skills they couldn't deal with
-a reminder "sane" humans are bad bad monsters

New Peru section was great despite above problems and players loved it.
This chapter took three sessions, was railroady but fun.
Except when they lost 90% of their stat points.
Being horribly crippled made a few go home after a fight in first city.
I like maiming or cursing characters rather than killing them.

Now I have London chapters and fan content to read.
Honestly it has reading requirements of a Uni subject with no credit.
Players might sail to London and I will try and use a Mauritainia scenario.
Or they will use Eihort's gate if they can spare the SAN.

So my campaign now on year three run since 1920 has been pretty fun.
Might discuss this later.