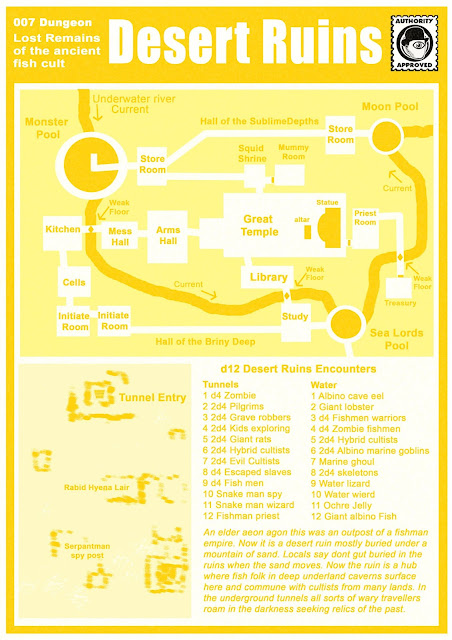 So had a good session of my new setting and house rules. Players had used the book and happy to go about doing weird stuff and enjoyed the followers stuff and oaths. Fixed some old zines and made new dungeon zine for todays game full version on patreon now). Quite happy to just toll if a room had a inhabitant 1-3 on d6. Then use random monsters and treasure. As party too three treks to finish I got to re roll contents from before.

3 players today same as previous game
John the barbarian managed to scare away his hireling
the temple bard with eunuch groom and two donkeys and a thief (later)
the arcane bard with loyal dog, two men at arms and a healer

Most of session in dungeon above killing fishmen, smashing their tablets of lore and chasing cultists. At one stage chased pilgrims into a zombie room. Teamed up with serpent man they spared who advised them of fishmen mission to recover their relic. Characters ended up cleaning out dungeon 3 times before the got relic and fled, After went to barrow hills looking for a serpent man wizard with a bounty and killed his men.

Making a few economic changes had biggest waves and issues so my economy will be askew for a while. My decades of DMing autopilot couldn't handle it. On other hand ppl were very into value of board food and stuff and making ostentatious spending. Bards threw money back to community and socialized in the city. One released her poems of 1st to 3rd level adventure and it was very successful and popular but everyone thought it was a comedy. Studied for a spell recovered from fish man documents. Sold two donkey loads of fishman lore but checked to not sell fishman demonology or bad stuff that got smashed. The other bard hung out in the temple and socialized among new peers with their "students".  The barbarian went into the forest and joined in a local hunter cult festival which involved self torment and serious thoughts.

The dungeon of random inhabitants was good for a session of exploration and re usable. Where the floor had collapsed opened more water access points some encounters could include more water creatures who could pop up close. One of the better moments was when fighter who happened to be a swimming expert was first and walked over one of the weakened floors for the first time and fell through. And failed to grab on and others failed to grab him. Current carried him about a 180 feet through rock and dumped him in the first pool room with some cuts and bruises. Ultimately it was his swim skill that saved him. Next he learned technique to hold his breath longer.

Setting aesthetically simpler and easy to get for players. Ancients meet barbarians killing wizards and cults plus dungeons. The setting design has lots of factions and conflicts. And fear of the cultists you murder in the mountains have friends who target you for stalking. Cults and wizards and professional looters practice archaeology of awful monster filled ruins seeking lore, relics and money. Ruined areas are huge sprawling cities, often with a tell mound in centre of a long lost city or civilization. So the tell near Adderfang would be known as Tell Adderfang. There are thousands of them, many are evil ruins from a age of necromancers rule and longer age of seven monster kings before that. Monsters, bandits, cults, collectors and outcasts live in such places.

When they went up to 3rd level some zero level followers took up character classes as zero level. So party ended up with 4 bards two fighters. Should get 2 more games before heading home.

The bottom pic is the in game map i drew as they explored, sometimes i fail my copy map skills. Which is hilarious and possible without a survey team measuring everything that sounds very slow. 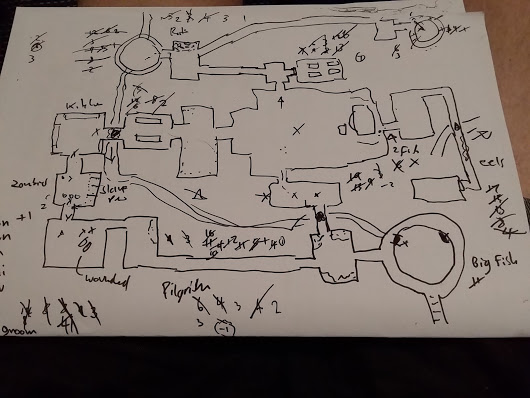