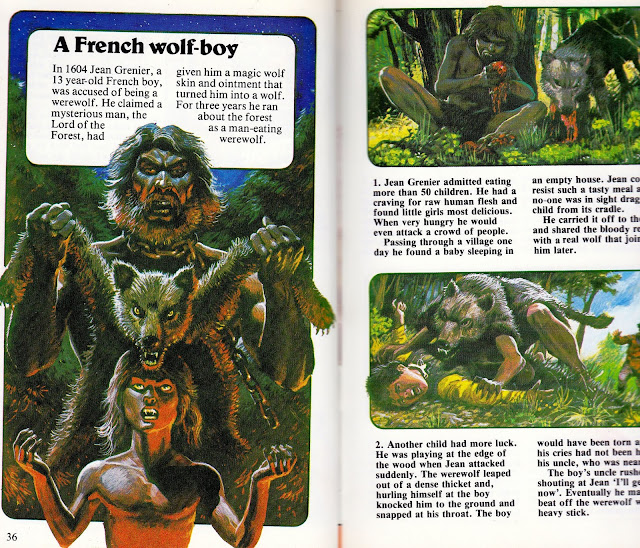 I learnficated so many lessons from Usboune books as a Kid thanks to their books for kidiewinks about the occult. This Is from the coolest of the Usbourne Guides to the Supernatural. Amazing how they would do books on horses, cars, astronomy then UFOs, Ghosts, ESP, Monsters full of awesome horror paintings. Ive still got them. There were competitor books that gave advice on how to be  a witch and how to cast spells and how to were wolf. Ive got three seperat volumes as my old one fell apart. The cover wes a awesome skull with eyeballs. I propose grabbing kids monster art and stating up as encounter fodder.

Wolf Child*
AC 14
HD 2 (d4 as child)
ATT d4 Claw x2 + d4 Bite +Beserk
MOV 15" (No Terrain penalties)
Can fight in negative HP up to -10HP during rage
+2 Hit and damage during rage
Immune to fear or morale during rage
Once enraged will kill till nobody is moving for ten rounds
Do not cause lycanthropy
+1 or better magic weapon to hit as wolf or silver or fire
Each year as a wolf child gets one skill Track, Listen, Survival, Smell, Listen

Wolf Children have been left in the woods or run away and are gifted the power of wolves to survive by the Lord of the Wood. He gives them a werewolf pelt for their soul. They will live with 2d4 wild wolves or a (Dog Child prefers 3d4 dogs) they can call for aid. Wolf boys can be caught can have their unholy curse removed and be re integrated. Just burn their unholy pelt otherwise they are just d4HP Boys. Then cast remove curse on them. Some are instead of using a wolf pelt suckle on a she wolf from childhood and that type cannot be cured so don't get them mixed up because they are identical If any kind of wolf child reaches maturity they become a werewolf forever. They are on friendly but subservient terms to werewolves and some choose to get bitten but they are immune to lycanthropy.

When they come of age and free of the taint the must give themself to the church who cast atonement or quest or demand youths service. There are wolf boys and girls and mixed and segregated packs and many loners. Some know a exotic martial art move or weapon type. They put the coat on to wolf up, especially if hungry or angry. Stealing it makes them harmless. The church takes great pride in saving wolf children and many get jobs on estates or recruited into the rangers. The king has a wolf boy hunt master now. Men of the wild lands respect wolf children as divine but dangerous.

There might be Lion Children, Vulture Children, Bat Children, Badger Children, Hyena Child, Lizard Children all of them needing your adventurers to not kill them and save their souls.

2 Scaring local children gathering berries and nuts by the woods
3 Leaving gory scraps on paths as warning to humans, mostly dead rabbit guts
4 Hear howling with wolf family
5 Killed a local dog or goat in a fight
6 Chased an old priest who tried to help him
7 Scaring local farm animals
8 Broke in hen house and killed all the chickens
9 Chased a shepherd boy all the way home
10 They have a lair in the old wolf cave

2 Footprints of child and wolves around campsites
3 They gonna act like a wolf I'll treat em like one
4 Boy ate someone's garbage and ran away when caught
5 That lord of the forest was a wicked druid lord cursing the boy as a weapon
6 Wolfsbane they find offencive wear it on you they think it vile
7 I dinna wanna hurt the child but it took four of us to drive him off!
8 There is a reward of blessings from the big city church for catching a wolf child
9 If we don't stop that child now they will just get bigger!
10 Once you have one wolf child they will all go feral, lock up your kids!