Terrible Campaign Ideas: Too Many Gods 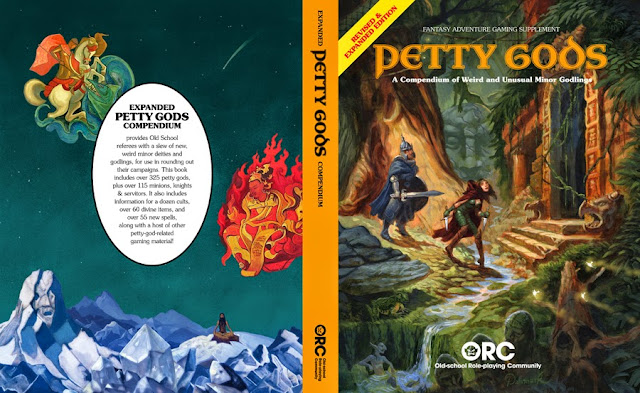 Re looking at my rpg books in my new pad and looking at what id like to get hold of. Still want ICE cyberworld book, lots of GURPS books, DnD cyclopedia. The awesome Petty Gods book (or PDF) has an amazing amount of non fluff ideas and I want to use it more. Here are some ideas.

Be like Hindus and have gods everywhere. That tree dryad or a pond spirit are petty gods too. A fancy gate post spirit. A dragon. A satyr. All mior common everyday divinities. A city will have at least a thousand shrines. A town at least a hundred. Any village will have a d10.

With gods everywhere you have to expect lots of trouble. Scare some villagers and the call a petty god. Mug a guy in city alley oops its is a god by mistake. Or that blood you spill attracts a tiny thirsty god from a rat haole.

Every dungeon could have at least one petty god roaming about. Many like dungeons and can be found watching ladders or criticising adventurers ropes.

Having a petty god met in every adventure isn't so bad a possibility. Many gods suited to meeting in cities or villages. Certainly many are more interesting than plain mortal foils.

As low level treating even kobolds and goblins and letty undead as supernatural beings makes them more scary. Goblins, dwarves, elves all kinds of non humans are low ranking divinities. As you climb a few levels you might meet a dangerous petty god and be able to fight one. The certainly make opponents you could face up to higher levels when you might move onto lesser demi human gods then proper gods that deserve temples and cities dedicated to them.

In such a cosmos animals and humans are pretty much at the bottom of cosmic order.

Other ways of using more petty gods
Scrolls with info on petty gods and means to summon them are in circulation. Dodgy fools try to call them. A dungeon boss might call one to annoy invading murder hobos.

A player is cursed to meet lots of petty gods and attracts them. Possibly curse can be removed. Possibly they might enjoy it. Even if locked in a prison a petty god will turn up and meddle in your life.

A region or country where petty gods are common. Or a island with a stranded god or god local in a pub or graveyard or crossroads. A petty god might be banished or trapped or bound by magicians to keep them away from a place or confined to a place.

A semi self aware magic book with info on petty goods keeps running away and getting found by strangers. The book contrives for the person to contact a lost petty god unseen for ages. Each new god called hangs around and becomes a local force. Players try to recover the book that keeps getting away or stolen or somehow taken from them. If you destroy it it just returns somewhere else a few days later. Constantly investigating new gods and finding who has the book would be a nice mini campaign

Dropping clues about weird rituals that might stir up a petty gods attention might be a way of dropping them into a setting.

A scroll describing a ritual to get knowledge on a certain night might lead to the petty god Aspix being awakened and to start his cult. He will hope to restore his ancient city and empire.

In ancient times when world younger petty gods were more common. Fairy and folk tale characters are often petty god so you might hear of them long before you meet them. Perhaps many imprisoned petty gods be awakened or revived. Perhaps players might overcome a temple with imprisoned petty gods in the basement. Players might notice a place has changed since last visit by a petty god. Prices might change or clientele of a bar might have improved. Crops and overall wealth improved in a village. Bandits and monsters might leave locals alone after a petty god helped villagers once. Perhaps someone they met was befriended or maligned by a petty god changing them.

Petty gods might leave stains or property damage or footprints that locals will revere and will show the wonder to travellers and pilgrims. Sometimes someone blabs too much about a petty god and dare complain about how useless and annoying a god is. This might attract a petty god or a friend or one or a rival. Commoners might evoke petty gods while using tools or performing every day tasks.

Petty gods don't need a fancy temple but one would impress them. A simple shrine where locals leave some fruit or a vegetable or food. Perhaps tobacco or flowers, Some local will perhaps make a gesture or spit when passing the shrine. Mostly a few locals look after it and rarely a acolyte might look after tit or several shrines.

Christian “Rorschachhamster” Sturke
I used a lot of earthly pantheons in my campaign, so every temple was dedicated to a different God. Some flair, but a pita for cleric pcs to find a temple of their faith.

This sounds much better... You could have a cleric, that venerates all of them or a subset...

Tom Fitzgerald+1
I like the idea that the book is the campaign. I once did a thing where I used the Fiend Folio as the basis for a campaign setting. The assumption was that the only monsters that existed were those in the FF and the number appearing was the total number in the setting. If NA was 1 there was only one solitary critter in the campaign, if it was 40-400 then there were 400. It never got played but I reckon it writes itself.

I could see a Petty Gods campaign like that where the only monsters were the gods and whatever servitors are mentioned in their descriptions. IIRC there are some fairly lowly gods for lower level parties to contend with and there is always the option of helpful Petty God NPCs (Maui from Moana springs to mind).

Joel Priddy+3
The PCs are from a monotheistic culture, and acknowledging the existence of other deities is blasphemy, but these damned petty gods are underfoot every where you turn.
Posted by Konsumterra at Saturday, March 25, 2017