Murder Highway - Schools out for summer 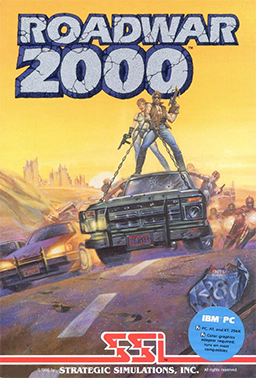 Started a new season with new drivers and best of all Ray wants to bring in his Gloranthan Duck Fisherman in as a Deathrace Driver. As will be fitting in on hyper complex schedule of LARPers and BoffleLARPers which most of my players do. I did it and loved it but kept wanting to punch strangers and this didn't feel very me. The party Sheriff is becoming a Shaman, The Mutant ram raider christian and the clone corp Ninja are elsewhere.

Sherrif met Lunar mechanic whos family all killed in outback zombie blitz so met him and Clawhanded cyborg vet in his car Green Lightning. So sheriff took Clawhand and the Mechanic to Bathurst to hang out on the team farm and help them find work. On way came across burning red armoured hummer like vehicle with crying kids nearby. As the approached the sheriff muttered a spell and saw the souls of feral kids hiding under animal skins and dirt. Fired smoke grenaide one trench fled. Warned the others and Claw went over a crude mine so fired twin MGs at kids exploding one and cutting down rest of group. Sheriff sighed knowing the feral kids were well known cannibals but still felt sorry for the brats. Crying kids in nice clothes picked up by sheriff. The rest he had rounded up and handed to a nun militia group and local lawmen. Decided to hunt kids base and found a wrecked school bus. Sheriff had seen scraps of uniform on kids he traced to a wiped out town two years ago. So team charged and fired with mechanic acting as gunner for sheriff as his smart dna dinosaur per was still in training. Kids surrended quickly and survivors handed over to authorities. Little Billy Shakespeare threatened to kill whole team.

Wiped out another foot bandit ambush and reached Bathurst for steak and beer. The moon mechanic had a 100k cash payout and wanted a car. Got a Range rover and hotted up engine to high octane and gave it light ablative armour. Put a single MG on hood and planned to do more later. Tried to recruit a crew as each vehicle could have two and Dorathy the dinosaur was deemed not counted as crew. Interviews old drunks, keen kids, gamblers and saboteurs looking for cheapest or free crew. Got a kid and a drunk. Mechanic had his lunar gyrojet pistol and found a dealer selling specialist ammo and he got heaps including a clip which had 6 shots but could fire in any order. Got a wicker basket of frag greasiness.

After a week about the Farm and wrecking yards of Bathurst the motorsport mecca, team were looking for work. Agent in Sydney offered team to be on pilot for Deathrace Oz  Style (a licence version of Deathrace USA show that sought to bring Deathracing to the Family audience 6-8pm time slot. Met other racers. A horrible Sydney radio DJ team in a volkswagen hotrod. A wanabee try hard sex symbol been in a few racing scandals. A ex motor murdersport league driver kicked out for attacking race workers. A cheese heiress who was blowing her money to becoming a death racer. A youthful  cool brat marketed to youth, possibly a clone.

The race started with no guns rule so started with shoving and positioning themselves with the smaller cars being sent spinning through Claw's trail of caltrops. Several cars got in out of control spins and bumps. Volskwagen flipped three times in air and landed on wheels. Later smaller cars got aheadof mechanics rover but ahead was a new hazzard. A jacknifed semi truck was on road ahead. Smoke grenaides from Sherrif followed by claw targeting trucks fuel drums. Even though mostly vapor  was enough to expose hidden gang the Goanna Spanners, feral car strippers with some crustry rock hiphop hippie vibe. They had deemed the new TV show pilot doomed to fail to fight big media.

First night as they hung out in garage eating burgers at pitstop Dorathy was growling and wouldn't let anyone leave. Sherrif melded minds with her and sensed with her a reptilian predator was about. Stayed inside and heard another racer savaged b y a giant 4m gekko lizard. They helped shoot it and injured racer was the kid brat who's pretty looks were slashed by lizard bites.

So one day of three in first track done with third being a live fire race.
Second course is cross country and drivers welcome to change vehicles
Third is a mystery track

Each track has three segments each ending with a pitstops