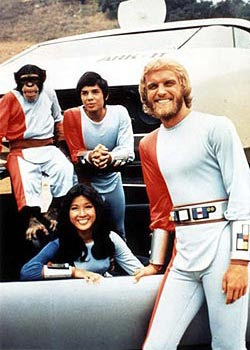 SF game will have one of these possibilities or string them all together with future time jumps every "season" really time asleep in hypersleep or lost in the void. Will do lots of blogs as I dig through old vaults of my SF settings.

One
Colonial Age
Colonial Era when earth develops faster hyperdrive and faster than light travel. Players in colonial gunships visit colonies isolated for up to 300 years to give them the great news Terra welcomes them back into the fold. Terra offers software and tech updates for compliant colonies. Gunships diplomats will meet leaders and investigate the colonies. Of course you don't want to alarm colonists but possibly one or two hostile species with FTL armed vessels have been encountered. The colonies are batshit mad mostly and many adapted selves to fit local ecologists and conditions. Many operate cultic caste systems with despot priest kings riving the colony cult. Most not welcoming to colonial plans.  Colonies equipped with T1 (Tech template one) auto megafactories. Tech provided like 2300AD RPG (second ed box set best, Old versions had great art and great aliens like Pentapods and Kafer. Adventurers will be discovering first hyper spacial routes. Gate points well outside solar system and take weeks or months to reach. Old colony ships were one way and catapulted by by a sort of limited proto gate tech station near Jupiter. They took a few years to reach destinations and had some radio contact with earth that took decades. Commonwealth gunboats travel a parsec a week + time to leave system to gate point taking weeks. Season ends with freezer error.

Two
The High Commonwealth Age
Terran commonwealth and the clone corp are now in golden age of prosperity with anti gravity, energy weapons, force fields, improved FTL via gates which also keep out unwanted guests. Are other genuine races and divergent human intelligence (AI, uplifted animen, increasingly weird colonists who find it cheaper to change selves than planet. You can be in a bar of space freaks and all will actually descend from Terra. Worry If you meat a real alien. Hivers and Pentapods are greatest allies of humanity but both prefer to be given human bodies for diplomacy. Players are Agents of Terra with superior tech and enhancements seeking threats to the commonwealth. Agents full of soft enhancements and wetware and psionic. Agents come from many colonies and Luna and Mars even other planets are strong states with unique colony traits. Sometimes act as agents incognito.  A great web of gate routes connect the core worlds and Terra then beyond them slower but well navigated routes using the older style of hyper drive connect isolated colonies. Season ends with battle in a hyperspace accident at climax of a mega space war! Save the commonwealth Hurrah!.

Three
The commonwealth is now administered by the ring of twelve, The first great twelve colonies of the first wave of 100 ships to leave old Earth as it was assailed by an alien ecology. Sol has retreated behind It's parsec wide interdiction zone preventing physical contact with those outside the great sphere Core ships create bubbles of hyperspace around them and are capable of  maneuvering at FTL and finesse and in system capability rendering older ships obsolete. Most of the commonwealth, the fringe and wildspace use older systems. This season ends when a their ailing drive misfires going beyond into overspace, avoiding being eaten by an old one and fusing with a sprawling space raft of wrecked starships and stations. Get rescued and returned to home universe thousands of years later.

Four
The Search for Sol
Sol? that's just a legend my friend. The all powerful Solarians who hid from the universe and left everyone to rot and fall apart after a great spacewar? Who lost their moon over a disagreement in social policy? Just a story for kids. Even the core worlds of the old Commonwealth are just legends made by humano-cultists. Heroes are a bunch of freaks travelling the stars supporting a science mission looking for old signs of Solarian or Selenite or Terran culture. The Heroes trade, defend, scout and assist the scientists looking for lost secrets. Heroes as traders get to live with roughness and profit motive as cover to support the advanced Darwin lab ship that hides in hyperspace. Occasionally they discover horrible things best left from when the universe was still young. The science ship has the most advanced hyperspacial array in this sector of the spiral arm which might bother beings not of this reality. And are those Solarians really gone? Distances are vaster after tens of thousands of years with even more colonies of humanoids over the spirals of the galaxy. Mostly the older type drives that take a few months between systems, with well mapped local data and rest on traded often dated hyperspace charts. The end would be finding Sol and the truth of what happened thousands of years ago.

Five
The Solarians: Agents of Terra
The agents are immortals who secretly meddle in the outside affairs of humans. You don't need to eat or breathe, you will live forever because you have been backed up. You travel light perhaps just one ultra tech gadget like a sub-space escape pod, a universal smartsuit, a polymorphic combat body, a universal weapon, a genesis bomb or a just a aerospace mecha in a pocket dimension. Only problem is there are things out there that notice Solarian tech (most adds to the mass of the universe by drawing energy from overspace). A few planets and suns have been destroyed in the last few thousand year as such encounters increase and unplanned conflicts escalate. Specialist properly armed agents and AIs combat the old ones in secret, they are to be avoided by regulars. If you more than survive such a encounter recruitment will notice you. Sol Prime observes many worlds and will just teleport you to crisis points being able to open one way gates and some times return ones. The end would be going upstairs to the next level of control - time central where they are then sent into different times and parallel worlds
Posted by Konsumterra at Saturday, August 29, 2015