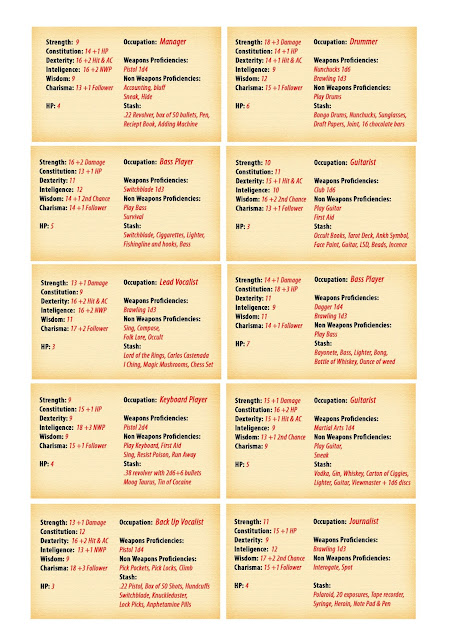 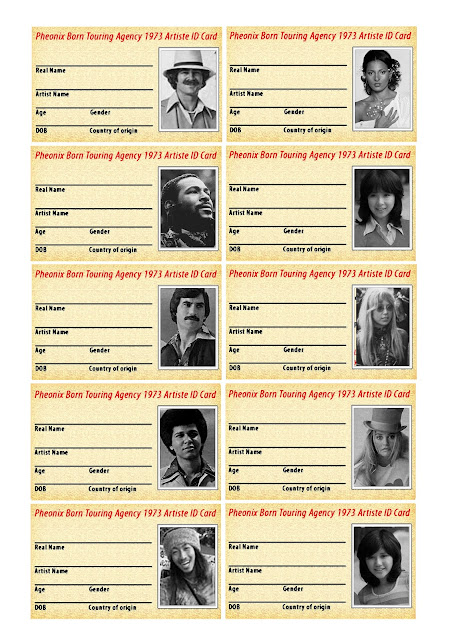 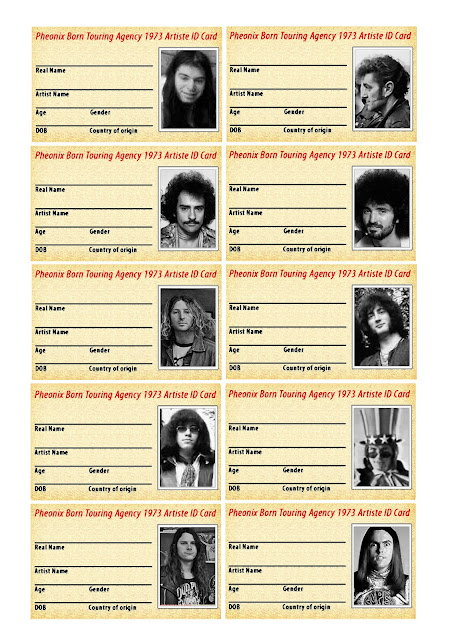 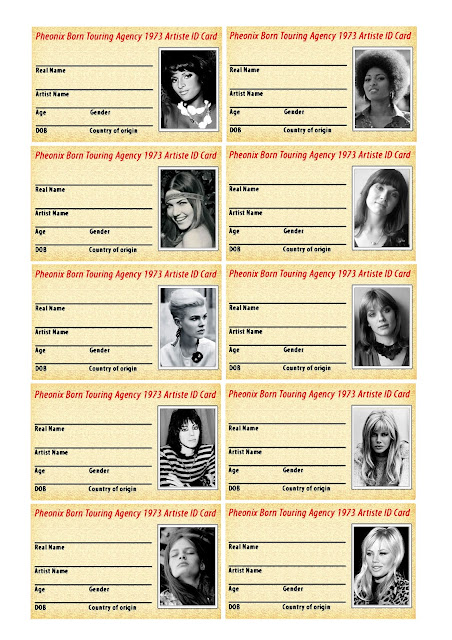 These are for my con game. Players pick a basic zero level band character, then pick a portrait card for front and fill in name, rock performers name.

Harder than id like to find images i wanted but at least some choices.

When they get transformed into 3rd level adventurer with a BX dnd type class will roll for skin colour and possibly for mutations.

Hoping to make customisable con characters so every party of 5 games im running will be different.

I will post adveture and all sheets after con. Have done full a4 sheets for transmog character versions. Need to do flight passengers lists and detail 2 hexes with encounter tables yet.

Did some PC gen tonight as regular game cancelled - all we did was treasure from the 4 session Gygax dungeon came to 50 000 gp each more than i have given out in all my games last two years.

Steve did a Tangerine Morlock with stubby horns, 4 fingers and toes per limb, who had just escaped from being kept by demons and devils in another dimension. He longs to return to his home colony, beneath the earth in an ancient automated warehouse bargain store. Where the great robot arm would bring treasure from the highest shelves. They have goods to last till end of time. He upset the local order when he discovered that a demon cult was trying to infect middle management who serve the store AI: VVallmaar. He is skilled in guns (blackpowder and energy), machine lore and other craft. He has his favorite axe (his specialization), a musket, a flintlock pistol and a one use disposable 4 shot laser from a vending machine in the home subworld. He also has a slave Eloi with a rope around his neck as back up food. Has 4 protection from evil biscuits in a tin, and 6 water breathing pills.

Matt did a Tangerine Eldren with no weapons skills (only defensive skills). He comes from a nomad satellite habitat of Eldren under the care of ASLAN, an AI who edited out every bad thing the nomads looked at from above. Unaware of why numbers thinning over last 400 years he teleported down to find out what the deal is. All the Eldren from ASLAN have pointy teeth, yellow manes and lion tails but have no knowledge of violence. Has some holy water. Uses divine spells, especially ones that control others behavior and healing. While ASLAN (Automated Satellite Layered Artificial Nueral device) is the god of his people, the greater goddess Pheonix has plans. Besides being chosen holy one, he is a barber, story teller, healer, musician and party animal socialite who thinks he can talk his way out of anything. Has a pet riding bird (a giant yellow and copper intelligent peacock).

Posted by Konsumterra at Tuesday, September 03, 2013