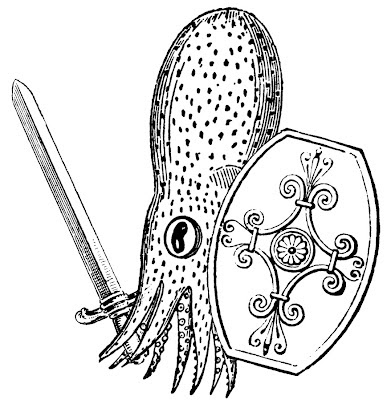 Sir Octavius, modestly using only sword and shield - he likes to throw shuriken or the odd spell

Tako make my world a little weirder. I wish i could get the octopus cardboard figs from steve jackson games with armored octo warriors. Id also like to know why they existed while most others were typical DnD creatures...

Tako moved en mass to the land after aiding sea elves in a horrible under sea war in the Elder age. In return Land elves offered them some uninhabited land. Tako were only a trickle at first but now are moving on land en mass. Some humans and other races spread lascivious lies about these mostly gentle creatures. Others mock them and resent their growing kingdoms. While a few turn to chaos and evil, most are lawful, practicing their own chivalrous code.

Tako have 8 limbs, 4 are used for walking, for hands four feet, on males one is his reproductive organ which at lv5 can detach find a mate.. These limbs regenerate if cut off and are very tasty. All tako can use all 4 hands for fighting and may use proficiencies to reduce penalties. Could use hands to hold a missile weapon, or two shields (cant use large) or just make 2 2-h weapon attacks or 2 bow attacks. Only live to about 40, some last 60.

-Colour changing skin good for +4 hide or camouflage if not armored, also for Taco sign language
-1d6 less falling damage due to being squishy
-They move 9 or 12 in water – all can swim and breath water
-No prone position, can’t be tripped or knocked over, but can be pushed
-At 10th lv a tako can cast with 2 hands and fight with other two
-Can use 2 sheild and cover different faces
-If scared squirt ink once per day base range 1F/Lv, -4 to hit unarmored head will blind 1d4 rounds
works better in water