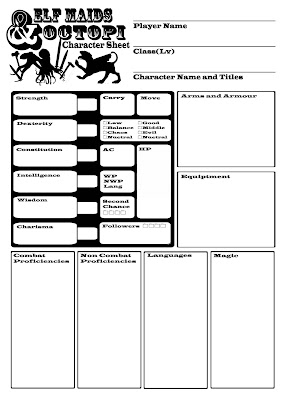 Yes and proficiencies aplenty but no separate feats or saving throws as I use stats as much as possible. Languages define lots about cultural knowledge a character has. They get native spoken and common spoken plus more from their class. Bards get most but most occupations learn new languages constantly, some being very specific like Druid animal languages or thief gang cant, or even hobo signs. You need to take written and spoken so wizards might have lots or weird written languages, while an illiterate barbarian might speak to many different tribes and humanoids. Druids don't really use written language. Then there alignment languages which are mostly used by otherworldly beings and priests and a few wizards. Priests are the main authority on alignment matters and dont always agree..

You might query my weirdo alignments. Basically you can tick one alignment per column or one tick in one column. Pure cleric style priests acknowledge the whole pantheon of good and evil gods and various abstract philosophical ideals. They follow Alignment philosophy and church or nation edicts, often with cosmological monotheist tendencies. Alignment determine where your souls goes or how it is recycled or not. Priests can join a particular sect at any point worshiping one god and changing his holy power and weapons and other things depending on the cult.

Any way my gods are oriental in character - basically Babylonian-Arcadian-Sumerian as if they lasted into a Byzantine material technology and Carthage never fell. They've  had several meltdowns of their ancient languages and art forms and merging with other barbarian versions of the gods the empire absorbed. But basically their material technology is late roman - 10th century and a few anomalies. Gods have different aspects with different alignments (they are mostly above alignment but have basic tenancies). For example an Ishtar priestess could be a blessed virgin, a gore covered amazon berserk or a criminal prostitute. People of all walks worship some aspect from queen of heaven to bar goddess form. Nergal doesn't just mess shit up, he keeps you safe from calamity and underworld power and lets your enemies suffer plagues and droughts. Priests specializing in one god are usually more mellow and less restrictive than the crusading common clerics.

Alignment seemed one of the most troubling confusion but I like some elements of old Gygax cosmology and decided to make it even more crazy/ With this system you could be just Good, or neutral hood, or balanced evil or neutral neutral or just neutral. The modern game acts like it doesn't know what Moorckock''s chaos vs law is all about. Some might prefer to believe their is a role for chaos and order, then there are those who refuse to deal with that axis of cosmic struggle.

Basically the whole mess is a bit more loose and more good reasons to feud or befriend others. My current player party yet might have some violent trouble as a result. The LG wizard contemplating her naivete and a possible alignment shift as she left the blood druid with an unconscious person. Moral dilemmas will be a frequent feature of the game. Im working up a d1000 curse table to help.

Posted by Konsumterra at Friday, September 07, 2012