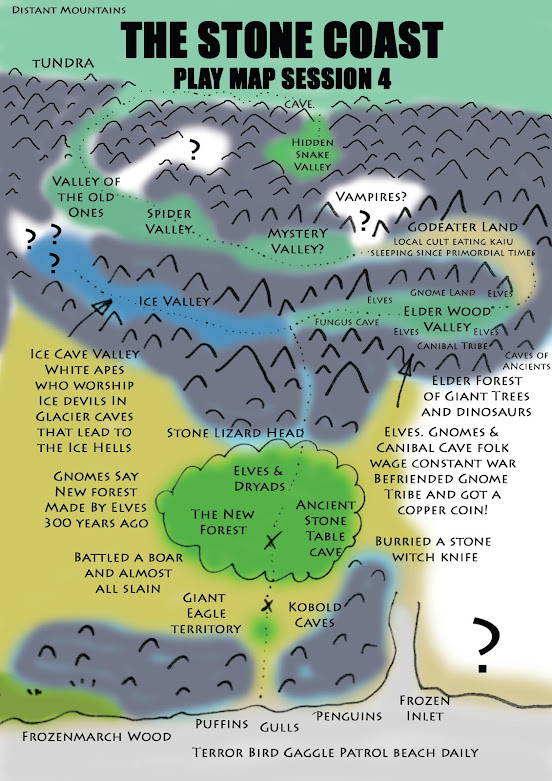 Current session 6 so this map dated as they now know hidden snake valley was a hidden volcanic tropical dino valley with lizard mystic allies. The party might hide here over winter ruining hours of setting design wor the dm worth 5 blog posts?

Customs so far:
"don't marry dogs"
"no cannibals
"we killed lots of guys in the snake tribe"
"white apes, wizard spiders and undead are our enemies"
"friendly with gnomes but not too friendly since the whole dog thing came up"
"lizard people were wise ancients and some are friends some are enemies"
"the one elf we met is freaky weird but he is crafty"
"we are mongrels with no past and no covenants with the land"
The Tribe The Elders (wear white ape skins as winter fur suits)Granny Toothless Druid Lv4 npc age 65Vaarg Leader Warrior Lv4 npc age 34
The Party (wear white ape skins as winter fur suits)Boron Warrior -  woodsman sworn to Law (Dallas) age 16Bunz Halfling - rock chucker and cook (Matt) age 32-Barley the farmer follower 16 also numerateweaver and trap maker"The Elf" or "Sour Berry" - trickster archer troublemaker (Richard) age 150?Wizard - master of prehistoric mystic arts (Hugh) age 21 camping in dino valleyAbhuman - Pteradactyl Beastman (Doug)  age 16 camping in dino valley

Currently, people cashing in their credit in followers to grow the tribe
-Bunz got a halfling wife and Boron wants a priest to try out religion for tribe
-The elf wants to lure some pine elf youth to join him in chaos
-Newbs seem excited by this bow stuff

Todays Session
Non-active characters sent to the secret dino valley cave
Rest of gang debated if they could get enough food and fuel for winter but decided to try and meet other tribes who had been gossiping about the newcomers and had killed lots of snake tribe on pilgrimage. Bunz now a druid studying from granny turned into a hawk and learned mountains full of the bigger pecking order of predatory flyers. Could not find snake tribals and quit being a bird. Group marched north till the elf spotted a hill he recognised as an elven spy bunker. Led party and met hidden elves who were not expecting any visitors this decade. Elves told where all the tribes were better than anyone and Bunz wanted to meet halflings. Local people called the moss clan of halflings the hole in the ground people and were thought of as weak frightened dirty feral children.

Bunz excitedly found a hidden village under a moss-covered hill country and the others thought him bonkers for thinking this a village. Then the dirty curly-haired children popped up from among giant lichen and moss shrubs. Inside the halflings welcomed them with food and party all force fed till vomiting and unconscious. Bunz was promptly married and there was two more days of feasting till party decided to check out story of a griffin that had kept village indoors in the day. So staggered from the halflings having negotiated a winter lair for the tribe they marched back to the mountains and saw a distant glimmer on a mountain and decided to trap the Griffin. With a fake halfling child as bait and a halfling child singing in a pit to help Boron, Bunz and Elf hid. The Griffin came from the sun suddenly screaming and grabbed the doll and was fireballed as it fled (demonstrating a sneaky split move attack skill). The bird scratches and flew to the shiny mountain.

On way up tiny mountain train a cyclops orc hunter shot at the party from cover above and Boron just started climbing the cliff even though he took some ferocious arrow hits reaching the orc that was some kind of minor orc hero of 4HD. Saw a distant orc camp and spied on them. A big orc was burning a strange rock and poured liquid fire onto stone eggs while orcs sung a song. Boron went back and told everyone and the orc spied on the orcs and was horrified at the war like provisions of life and magic obviously making evil magic. Bunz and Boron thought worth talking to orcs and if there was trouble elf could fireball them all.

Orcs were amused by Bunz the halfling and debated what they were but the Orc smith hero knew and the orcs all laughed at the harmless creature. When huge human warrior Boron stepped out the orc hero knew of him too from tiny bird whispers. Orcs less thrilled by human and the elf hid whole time while orcs busy. Halfling wanted to go to the mountain top and orc thought this funny. A bet was made by orcs if Halflings bring back some griffin gold from nests as proof the size of a child head would surface. Also the sacred Griffins don't hurt them as they are sacred to the mountain god and the Griffins will rage for days in fury if any harmed. Bunz accepted all these terms and orcs shared goat stew and strong orc grog unlike any they had elsewhere. Elf disgusted orc bows were a parody of his own people but they didn't even sing to a tree for a hundred years first to make them. Bunz and Boron left the orcs and met the hiding elf who warned them the orc hero was a warlike fiend up to no good.

Saw some giant goats but Boron was good with animals and encouraged them to pass without incidents. Finally, they found a good cave rest point on the train more than a yard wide so they set up camp all tired but eventually decided to look in the cave as was agreed to search strange caves a good new tribal custom. And found two adult trolls snuggling while and several huge babies size of a grown human crawled about. Blam, a fireball later and most of babies ash, cept one was a big limbless burned chunk of meat that might revive. The wounded parents enraged tried to get up as Boron and Bunz attacked. After tiring minutes of trying to kill trolls who every time one was close to death the other would get up. After a while where they worried about survival and the maths at work finally it was remembered the cave was on a cliff so they threw wounded trolls off the mountain. As they fell they revived and screamed the rest of the way. Everyone was relieved and tired and badly hurt. Bunz and Boron were barley standing and the elf had been hurt!

Rested a bit more and a day more uphill trails and saw a rest cave on the trail which had four ogres and a child ogre inside and everyone went nope. So marched on into the night and then tried to sleep on cold windy outcrop. Boron was a wreck next day and camped again on same claim a few miles on and resisted another horrible night then morning made it to the shiny place thy had seen from the tundra. A shiny yellow stone unlike any in the region with carvings of the sky god coming here to keep gold with the Griffins and give a fraction to one-eyed orcs for lightning bolts. Boron was struck by this winged sky spirit and of course, wanted to be that awesome with Griffin and orc minions and lightning bolts. The elf marked the rock with a chaos rune as he is obligated by chaos to do. He had funny twinge this was some kind of magical quest and he might have caused offence.

Further up found many of the orc cyclops hunters were here ahead relaxed and somehow had passed party effortlessly. Orcs laughed at them and smiled at party good efforts.

Finally near the peak saw more Griffins (or maybe it was same Griffin in circles) then heard screeching. Found halfling bones as orcs told them of and had a sad moment before sneaking to get a look at the entry to the Griffins. The elf crawled on his belly and saw the awesome sight of four Griffins feeding young a giant goat. Bunz crawled up beside him to see the sunlight cascading of their cruel beaks and claws and iron feathers. Then Boron crawled up broke a stick and swore and screaming Griffins went crazy. Then a great shadow appeared, a colossal roc eater of mammoths snatched the party and carried far away and dumped in a nest. The gang were pleased at this outcome as thew were still all injured from trolls. Note: This is pretty much eye of the serpent module from 80s TSR UK. Its a wilderness pointcrawl good for kids to learn wilderness with and has great maps. SHows how to go run wilderness choke points like a dungeon.

Elf found a note in the old human priest tongue of the old evil empire about some outcast and found strange worked wooden objects in the nest they did not understand. Checked for eggs or chicks then climbed out when sure they were safe.

Wandered icy peaks avoiding frozen lake and were ambushed by a ghoul under the ice that had them all afraid as they were near death. Battled an ice spirit to find it was freezing a egg which burst and had to hurt a Caterpillar boron was holding the non-invulnerable body parts. Close and messy but got some pretty shiny stones.

In lower marsh valley found wooden rotten heap in grass with strips of metal and nails they grabbed and inside was a pile of silver metal discs the party wondered about. Except for the elf who knew full well it was ancient currency and grabbed a few rings and a magic ring too. Lizards attacked too but killed and eaten.

Found lake with a causeway to stone house and in courtyard found skinned lizards on a rack. Opened door and found huge supply of dried fish good for the tribe and elf looked about as was hardiest and charmed a lizard man he found. Rested for a week eating fish and became friends with the lizard who became the elf's follower. Eventually took lizards boat downstream and dodged a waterfall and continued down to bottom of mountain after dealing with petty critters and eventually met a shman of the snake tribe who said he would join them and teach the the serpent cult ways. Boys waited a day of hearing of the harsh snake brother code and servitude to the the sleeping masters then agreed to murder the old man. He and his snake put up a bit of a struggle and the boys returned to the halfling tribe and found all the tribe livin'g there and Granny loved living with halflings who enjoyed her druidry and human use of weapons better than sticks and stones. Party had unwittingly completed several initiations to local spirits and Granny was pleased.

Players all afraid to commit to alignment oaths as feeling dangerously obligated lots.
Posted by Konsumterra at Sunday, June 28, 2020