d100 Wonders in the Tundra 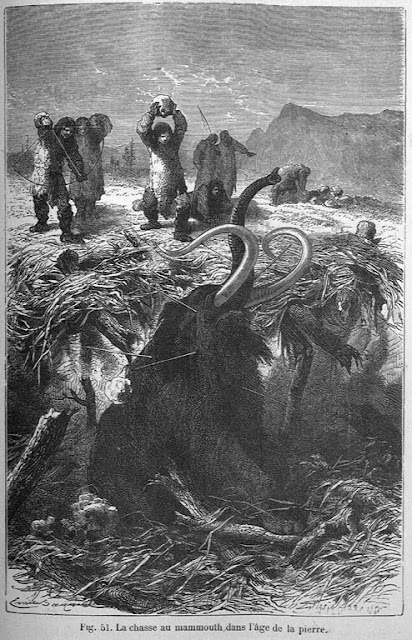 So while my setting is inspired by history and the main area is based on Beringia where ancient herds walked from china to north America. But Im happy to throw in all kinds of prehistoric fauna like terror birds. Mostly late Pleistocene but some Eocene animals and feathered and furred dinos are ok. I like flightless birds and some animals from other continents. In the mountains, there are many strange unwelcoming valleys and magic creatures.
These are strange encounters on the tundra and while they might be spectacular they do not have to lead to combat. Fleeing in most cases should be an option. They are more for populating hexes for exploring than to find in the existing territory. If you dropped some on a map you could have people hear about some from other tribes in trade.

The tundra is less magical and has less strange remnants of the past than the hidden mountain valleys. It is a new land, fresh with the new order of life and start of the human age. Necromantic wizards are beginning to work together to recover forbidden lore of the age of darkness and their alien gods who fell from the stars.

Oddly if you go into the deeps trolls and dwarves wage war in the Underland and it may not have changed as much as the surface nor will it. To be fair those in the deep fell less far in the cataclysms in the past and some things survived best forgotten. Elves and Dwarves have advanced but hidden settlements. Those that dwell near humans and great wastes are of a lesser sort, broken by cataclysm and determined to keep their arts away from humans. So most of the elves work in wood and dwarves use stone hiding metal from all the younger races that lost these secrets.

Technology
This is just to cover a variety of settings but the first half most relevant here. More primitive ape folk and white apes often rate 1 or 2. Most tribes are 3-4 and 5 is the highest tech most will ever see. Occasionally some culture moves to 6 but would be considered decadent and influenced by forbidden arts of the ancients. There are tribes dedicated to destroying civilisation from before the age of night ended. Occasional non-humans develop advanced tech or you might find it in the deep where the long night never quite ended. Magical technology can diverge from this but assume more advanced tech offers more types of magic training and fancier temples and palaces. Golem makers made ovens and pumps that were automated which could duplicate more advanced technology.

Email ThisBlogThis!Share to TwitterShare to FacebookShare to Pinterest
Labels: Octopi