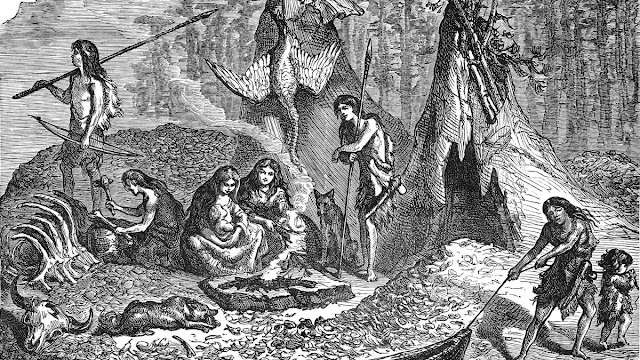 So sorta like the Beringia landbridge tundra with patches of forest, permafrost, grasslands but also animals like flightless birds roam here. Mix of Pleistocene and Eocene animals, mostly mammals. If plants got across bearing crossing and tortoises got into Norway and UK rapidly after glaciers left I wonder about non-mammal crossing but oh well. A sea or a night time table might be good and a bit more spooky.

DnD dire wolves more Tolkien than real. Real dire wolves are not that bigger than regular wolves but science says they were dumber and more were caught in tar pits than more modern wolves who live in the same place but didn't keep getting stuck in tar. But here I mean DnD ones. LOTR movie ones are more hyena-like. Giant beavers and Lynx in ADnD are smarter than most people realise. I'm fine with this or even that a % of animals are intelligent and potentially use magic.

Tundra ain't all permafrost and snow. It has woodland, seasonal grasslands, streams, frozen marshes, rivers, glacial gravel heaps, areas of stones and moss, hills, ravines and more. The remnants of prehuman ruins in mountains and even advanced stone using peoples and monolith makers are rarer here with mostly nomad peoples. Many grandparents note trees have increased on mountains and spread along tundra plain rivers. The elves have been busily reforesting the planet after the dim light in the age of the monster ruled era.

Lone strangers are to be treated with caution. Many supernatural beings appear as loners as do wicked outcaste magicians, lycanthropes and worse. Some don't take a risk and slay loners without any familiar tribal markings.

Found a funny essay surprised hominids ate so much rabbit for so long and would bother. As rabbits are very easy to catch kill and skin in less than a minute and digging them up is easy I was surprised but I guess most assumed everyone eating megafauna and big animals.
Most recent game had cave people make friends with civilised lizard people who encouraged the tribe to drive out white apes, snake tribe folk (these serene lizards hated bossy snakes) and giant spiders in area. The elf and halfling spent some time scouting ape areas with lizard men temporary followers two scouts with darts and a monk with an obsidian naginata. Invisibly sneaked up on and killed shaman and his baboon guards and a bunch on spider monkeys. Found potions and fetishes and human skins in the shaman shack. then returned to lizard monastery triumphantly.

Spent some time studying and the elf read lizardfolk wall texts and learned the basics of spoken language. The halfling had become a druid  and learned a puffball spell and the elf had learned fireball was keen to test it. So they went ape hunting and killed a number of small foraging groups then returned to the ape stone circle where they killed the shaman. They fireballed mourning white apes in the shamans ancient stone hut and killed many of the ape tribe heroes. The apes had a great setback and the lizards gifted tribe with some crystal daggers and a crystal that could store one cantrip spell for anyone to cast. Lizardfolk welcomed tribe entering valley and offered them the evil spiders cave. What could go wrong with mostly human colonists? Well better than stinking white apes and giant spiders.

I might do a table of hazards and wonders too to the company this
possibly a bunch of events of interest or seasonal events...

Im happy to advance this group to test my rules at higher levels which I have neglected. Only one of my three games still running.
Posted by Konsumterra at Monday, June 15, 2020