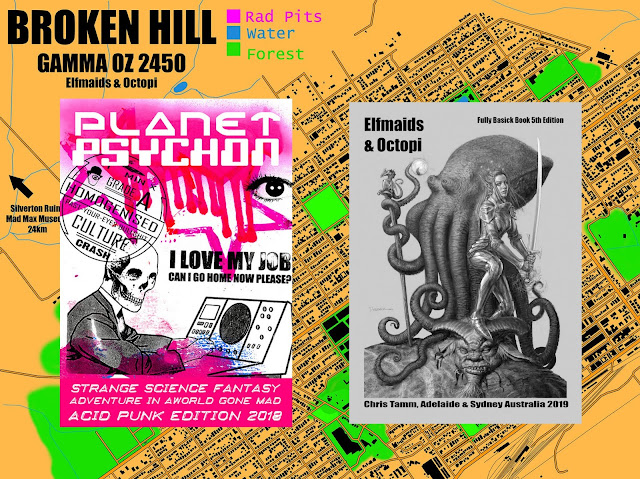 So have struggled to get anything remotely like a fantasy rpg game running in last 3 years in Adelaide. Last few attempts which i invited newbs begging for game to learn had them cancel. 4 out of 7 non attended last few sessions which irks me when people who requested it bail. One gave various reasons of transport and i said its 5 min by bus 20 on foot kept coming up with more reasons till said had 3 kids to watch which is best reason of all and and would have saved lots of time if stated first. I can always get sessions when i visit Sydney. I did enjoy scene in melb RQ con where stil lots of anarchist punk gamers and older gamers well educated and considered I should move there. I do hope to go there for conventions this year and take some of my own merch to build up to my Planet Psychon KS.

Ive quit my current Marvel campaign as players reliability was too low. I might do more but it kind of wasted my prep time and players with low numbers wouldn't do stuff out of fear which is pretty broken for a game I've never killed a player in.

Without running fantasy games it makes motivation for writing for them at all. Art is bottlenecking lots of my projects now and usual editing problems.

So on more positive note did run a sunday game of Psychon that might be viable after xmas. Then Cthulhu game now 3 years running had players interested in a alternate Psychon game which younger players have time for. One old friend who collaborated with me interested in a PHD in game theory and interested in Helping me prep Psychon. Art here is to show off how im mixing my EMO grey rulebook with my Psychon book with my Gammo World Broken Hill map. Hope to get a Hardback Psychon set up on Lulu shortly so i can have a few copies one for me and one for cons.

So I got a package through Lev in Melbourne of game stuff that beat stuff two shops sent some time ago when post here usually 2 days. It was a exiting mixed bag of stuff.

Marvel Super Heroes Deluxe City Campaign Set
Came in a basic yellow box which made me think was a mistake but has contents i wanted inside. I got this partly for the maps which has some great locations even though I don't use New York it has good stuff. Adventure writing stuff is good too.

The Mechanoids
I have the original 3 books I was hoping to replace with this but nope. Many versions of this book this one is from 1985. If you don't know Mechanoids was a series of Palladium books. The first was about a colony invaded by cyborg psionic insectoids. The second The Journey was after the colony destroyed colonist survivors in sleep in the mile long mechanoid mother ship awaken to try and get revenge. Third is various raced visit the dormant mechanoid homeworld as a team of explorers. This book covers lots of content from book one with extra stuff on life forms on colony, expanded colony info, extra tech, extra stuff on sea, some adventures. So some good stuff I have stolen in SF games, Superheroes and more. Mechanoids are a great evil race you can plunder. As for a complete mechanoids trilogy in a book this was not it. As a kid I loved the art now not so much. Will keep eyes out for other versions but some good stuff.

Dark Conspiracy: Dark Races Compendium
This was a old GDW game about aliens and dimensional xeno beings from other realities creeping into a near future almost cyber setting. I did play a bit in early 90s but I have always found lots of good ideas to steal in horror, super hero and SF games. My fave were the bugs that set up cheap apartments to farm people in secret. Conpiracy X and Dark Matter games are similar content but the near future setting works well. Ha dlots of good twists on traditional monsters. Was hoping would expand on better races in core book but mostly new stuff plunderable for various things. It's all pretty imaginative.

Cyberspace The Body Bank + Sprawlgangs & Megacorporation
Cyberworld was a cyberpunk rpg which was very dense and had good content typical of Iron Crown. While the better known Cyberpunk RPG had some good stuff it was kind of too cool and anime like at times. CYberspace was different. It had humour, strange unexplainable events, uncertainty about the world and room for GMs to insert other content. Id compare the humour streak and grit to Judge Dredd. All of the books were very good and Death Valley Free Prison which inserts a escape from new york and mad max like huge open prison in nevada into the setting. The Chicargo arcology book would almost fit in 40k.
Body Bank is second book detailing NPCs to insert in anywhere and you could put in all kinds of settings from CP to superheroes to espionage. Sprawlgangs book has lots of cool gangs, evil companies and a few more NPCs.

Oriental Adventures OA1 Swords of the Diamyo
Alas has no maps but his underated Zeb Cook book has one of the best hexcrawls ever published plus you could use bits in YoonSuin. I learned alot running this as a teen and it expands on the basic book well/ Has enough content for months of play. Ive got everything for this now.

GURPS Autoduel & Traveller
1st ed of Autoduel one of may favourite settings and books. The cover art was one of my favorite RPG covers ever. It inspired lots of my own cyber and roadwar settings. I got second ed as has more content and new art. Of all the editions of traveller Ive had Ive decided to get more GURPS because I find writing and layout familiar. Has some good art and dense. It's portrayal of the Imperium seems less dated than other versions I have and book given me fresh eyes over the Imperium.

AD&D 2nd Ed Green Books: Celts, Rome, Charlemagne, Vikings, Greece
Im a big history gamer and probably helped me to quit reading fantasy and keep me away from forgotten realms and other settings. Lots of this era of TSR books went history mad - Mystara and Forgettable Realms did products plundering history. Interesting in lots of ways but it just got me using my own research and not wanting to have everything and everytime forced into same timeline at once. I probably quit TSR and DnD around this time and used RQ to run dark ages and mesopotamian bronze age. But these books are good. All this series are good. I especially like the Celts book covers europe and not post roman Ireland as some seem to do. Even though I have many viking games I keep pages from the TSR one in my viking folder. I studied classics and and have read a huge amount of Roman lit but still seem embarrassed running Rome as a setting (Cthulhu Invicticus) as I still feel it is far more complex than I can handle but the effort here is a good one. Reading different versions of same content can often yelp you understand things well. As for settings just ripped on history and slaps egypt next to vikings I choke on it a bit now. When I read lots of history I discovered it was a better use of my memory than of being a fanboy of a fantasy setting with mostly terrible novels. If you talk crap about history it sounds less strange than about a trademarked fantasy setting.

I do like what design mechanism has been doing with history settings and they are probably doing the best job right now.
Posted by Konsumterra at Friday, December 06, 2019