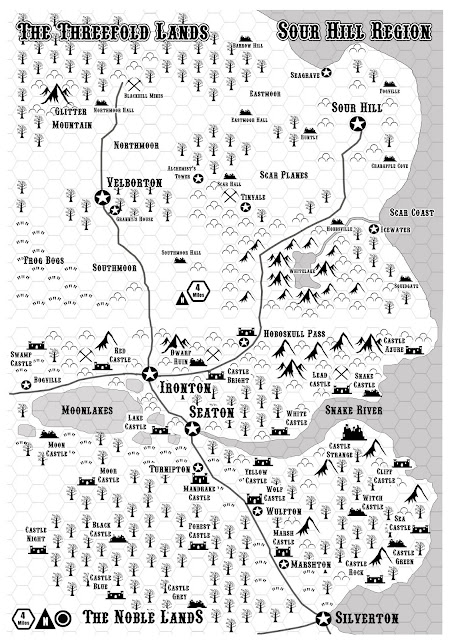 This is rough of a southlands for the previously made northlands. The north is in decay and falling wild. The south is bristling for war and divided into territories of castles ruled by counts, dukes, barons and petty knight clans in the smaller ones. The castles own serfs on estate and they don't get access to traders or outsiders much. Knightly combat sports, slavery and invitations to far off wars common but they prevent local fights. Lots of knightly clans here players could be related to. Knights roam about lots and broke knights become robber knights.

Every hex has one to a hundred humanoids and three dozen demihumans. There are caves crossing all over the kingdom dug in prehistory when humans hid underground from great disasters. The underland is easily accessible and allows travel for subterranean humanoids. There are a d6 famous local haunting and a creature in ever hex.

There are three small trade towns. Silverton where court meets and well off nobles live seasonally. Silverton is defended by by the other towns. Seaton a trade port with many exotic goods and magicians live. Ironton where mined goods are smelted and made into arms and armour. The kingdom military is garrisoned here. Several villages with coach houses and free trade for road commerce. Small castle = pop 40-100 Large Castle = Pop 200-500.

Multiple ruined castles from a long lost evil dynasty are intact and have been plundered by adventurers every generation. There is a haunted dwarf ruin also. Castle Strange is a ruined prehuman fort where alien creatures dwell and odd haunted things happen. Many adventurers explore it's haunted depths. The wilderness in the east between the witch mountains was renown as a elf kingdom. Most fear it as haunted and some say elves still are hiding in a invisible otherworldly faerieland. Strange monuments and ruins are there and cultists frequently occupy it.

Will probably do castle generators
Lotsa knight stuff coming
Posted by Konsumterra at Tuesday, May 14, 2019