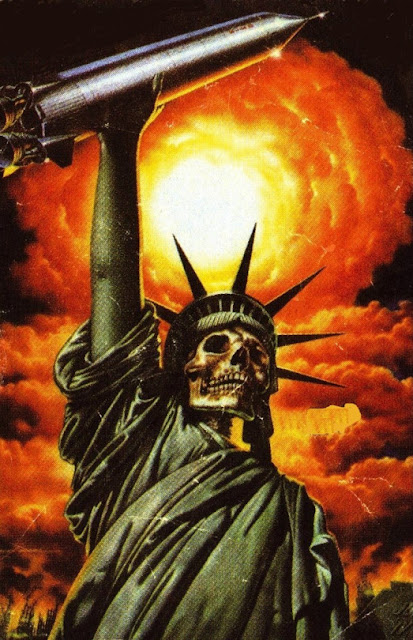 I get a mention in this podcast episode 3 towards end http://podcast.glowburn.org/
Actually they expanded my idea of cryptic alliances and id never considered they were alignment. I also like notion you can have one alliance for community and another personal - or you could be an involuntary member.

This was slowest table ive ever done. I could have done 6-10 others in same time. Probably better for taking time.

Wasteland death cults are a common feature of outback life. Most cults dont waste time fighting gangs or the law. They are secretive, mostly involved in ritual and power plays. The cults mentioned in Wasteland Gangs act more like gangs and have petty concerns of gangs.  My earlier gangs for city sprawls is here too reminding me all these factions fine for a superhero game.

Real cults are weirder. When they arise from hiding with pointy hoods, torches and bloody daggers they are seriously pissed and intent on killing. Mostly they use the law or pawns or use plainclothes to get normal folk to help them. Hooded robes worn by cults tend to be of a colour with a cult symbol on the chest and others on hoods indicating rank. Some of these cults were harmless twenty years ago, now they have gone over the edge. More things from beyond are leaking through the veil again. Inhuman intelligence recognize cults value.

You dont need to roll every table. You could use the d12 to build a new cult or just roll the d100, or use some d12 tables to add detail or twists to a d100 cult.

Some cults have similar names and identifying them and exact differences can be hard.

100 The Dark Star Brotherhood believe they serve a entity that awoke in late 80s by a Jupiter probe and also killed the mars expedition in 1999 and is responsible for the various bioplagues, the rise of the dead and mutations. The cult seek to commune with their god and serve it in hopes of being spared. While many perform sacrifices and prey others try to commune through undead and support the apocalypse. Some cultists work with space programs and radio telescopes and seek to meet the alien. Some cultists even expose selves to the necrovirus that makes undead and mutagens in hopes of pleasing or communing with the dead

Posted by Konsumterra at Monday, December 12, 2016